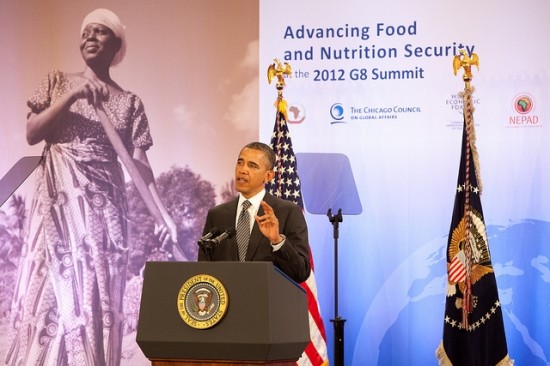 Driving through Ngong Hills, not far from Nairobi, Kenya, the corn on one side of the road is stunted and diseased. The farmer will not harvest a crop this year. On the other side of the road, the farmer gave up growing corn and erected a greenhouse, probably for growing a high-value crop like tomatoes. Though it’s an expensive investment, agriculture consultants now recommend them. Just up the road, at a home run by Kenya Children of Hope, an organization that helps rehabilitate street children and reunite them with their families, one finds another failed corn crop and another greenhouse. The director, Charity, is frustrated because the two acres must feed the rescued children and earn money for the organization. After two tomato crops failed in the new greenhouse, her consultant recommended using a banned, toxic pesticide called carbofuran.

Will Obama’s New Alliance for Food Security and Nutrition help farmers like Charity? The New Alliance was announced in conjunction with the G8 meeting last Friday. Under the scheme, some 45 corporations, including Monsanto, Syngenta, Yara International, Cargill, DuPont, and PepsiCo, have pledged a total of $3.5 billion in investment in Africa. The full list of corporations and commitments has just been released, and one of the most notable is Yara International’s promise to build a $2 billion fertilizer plant in Africa. Syngenta pledged to build a $1 billion business in Africa over the next decade. These promises are not charity; they are business.

This is par for the course for the attempted “second green revolution” that is currently underway. The Gates Foundation and its Alliance for a Green Revolution in Africa are working to build up a network of private seed companies and private agro-dealers across Africa. The goal is to increase average fertilizer use in Africa by more than a factor of six and to decrease the distance each African farmer must travel to reach a shop selling seeds and inputs. Those who support this vision have heaped praise on Obama and the G8’s New Alliance. In fact, with both Republican and Democratic support, this is one of the only things both parties agree on.

But what do actual Africans think? Not just the elite, but the peasant farmers? Charity, for her part, is frustrated. Most of Kenya’s land is arid or semi-arid, making agriculture difficult if not impossible. But Ngong Hills receive adequate rainfall – or they did anyway. The climate crisis has changed the previously reliable rainfall patterns within Kenya and even a wet area like Ngong Hills is suffering. The stunted, diseased corn one sees there was planted from the “best” store-bought seed and ample chemical fertilizer was applied. The crop failure was not due to lack of inputs.

In another part of the country, about an hour from Nairobi, Samuel Nderitu points out more failed corn crops. Corn – or maize as Kenyans call it – has been the main staple since Kenya was colonized by the British. But the corn growing on the demonstration farm of Nderitu’s NGO, Grow Biointensive Agricultural Center of Kenya (G-BIACK) is healthy and thriving. So are G-BIACK’s other vegetable crops and fruit trees. Why will he harvest a successful crop when his next-door neighbor will not?

G-BIACK is an organic farming training center, and the crops there were grown with manure and compost instead of chemical fertilizer. G-BIACK also saves seeds instead of purchasing seeds from the store. The farmers in this region, near the city of Thika, farm tiny plots – as small as one-fifth of an acre and averaging one acre. Many use chemical fertilizer, but since it is expensive, they often fail to use enough. “Here, in Kenya, if you plant anything without chemical fertilizer, if you don’t know anything about organic farming, it can’t grow,” says Nderitu. But, as G-BIACK proves, those who do know how to farm organically achieve great success. G-BIACK was named the NGO of the Year in 2010 by the UN’s Food and Agriculture Organization and the Government of Kenya. And its next-door neighbor with the failed crop is now attending its trainings to learn organic farming.

About 15 km outside of Thika, a farmer named James is also thrilled he switched to organic farming. Farming only one-fifth of an acre, he used to require two $60 bags of fertilizer to plant his crops. Now, he uses manure from his pigs and he is happy with the results. Like most Kenyan farmers, James grows corn, beans, pumpkins, kale, and other crops for family consumption. For income, he can sell a pregnant sow for $240 or a month-old piglet for $20. Before, he would spend much of that money on fertilizer, but now he can use it for other things. He proudly demonstrates how to use his new well, which his increased income allowed him to afford. Next, he plans to buy a water pump so he doesn’t have to pull the water out of the well one bucket at a time.

Organic farming in Kenya is not about hugging a tree. It’s a simple financial matter. Those who rely on purchased inputs must use their scarce income to buy them. In Thika, where the population is concentrated and land sizes are tiny, many women supplement their farming income with prostitution. The area’s AIDS rate is sky-high, although it has come down from the 37 percent high it reached a decade ago. Poverty breeds AIDS by pushing women into prostitution, but AIDS also breeds poverty, as children are orphaned when their parents die. Some are raised by grandparents, others live in child-headed households. By allowing farmers to keep their money instead of spending it on costly inputs, organic farming gives hope of breaking this cycle. How many fewer women will need to enter prostitution if they can instead make ends meet by farming?

Whereas chemical farming is input-intensive, organic farming requires knowledge. A farmer relying on fertilizer and purchased seeds needs money and the entire supply chain required to manufacture the inputs and distribute them to a nearby agro-dealer. But knowledge is free. Robert Mwangi learned how to farm organically from G-BIACK and soon saw his income increase. With five acres, he was never destitute, but now he has enough money to help family members out when they are in need. Mwangi’s neighbors have seen his success and he is helping them adopt organic methods too. At the same time, he conducts experiments on his land to see which methods or crops give him the best results. As each farmer in the community conducts an experiment or two on their land each season, they can share their results with one another and all will benefit.

An internationally celebrated farming technique called the push-pull method has also helped Kenyan farmers increase yields – by a factor of 3.5. The yield increase is due to elimination of an insect pest, the stem borer, and a parasitic weed, striga, as well as an increase in soil fertility. The farmer pulls the stem borer away from the corn by planting a cattle feed crop called napier grass nearby. Napier grass is more attractive to egg-laying stem borer moths than corn, but few of the larvae that hatch on it survive.

A second cattle forage crop, desmodium, is planted between rows of corn. Desmodium, a legume, fixes nitrogen in the soil. It also releases chemicals into the soil causing striga seeds to “suicidally germinate.” It releases yet more chemicals into the air that repel stem borer moths and attract parasitic wasps that prey on stem borers. All of the crops used in the system are native, so no corporation profits, only the farmers themselves.

Elsewhere in Kenya, not far from the home of Barack Obama’s paternal grandmother, American Amy Lint and her Kenyan husband Malaki Obado champion native Kenyan crops that are perfectly adapted to the region’s long dry periods. To an untrained eye, the area looks desolate and devoid of food, but the locals know better. Walking through their rural village, the point out leafy greens, fruits and crops used for building materials, medicine and rope, all growing wild. These aren’t a replacement for cultivated staples like corn, cassava or sorghum, but they provide micronutrients in local diets and improve local food security. With so much natural abundance, one must wonder why the Gates Foundation has sunk so many millions of dollars into creating staple crops with the full range of required nutrients genetically engineered into them.

Across Kenya’s many different ethnic groups, provinces and ecological zones, farmers agree on what they need most, and it isn’t help from Monsanto or Wal-Mart. It’s water. In arid and semi-arid areas, lack of water has always been an issue. But at least the two rainy seasons, the long rains between March and June, and the short rains between October and December, were consistent. During each rainy period, Kenyan farmers would grow a crop that had to last until the next harvest. But, according to farmer Florence Ogendi, the rains changed about five years ago. First the short rains became unreliable, and now they can’t even count on the long rains. In her area, the long rains used to come in late February, but this year they did not arrive until April.

Sometimes, water that used to be shared by all is now taken or polluted by a powerful few. Near Kitengela, an enormous flower farm has drilled wells to irrigate its crops, which are for export. With so much water going to irrigate flowers, the nearby Isinya River now runs dry. Elsewhere, Lake Naivasha suffers the same problem, also due to flower farms. And a day after Nderitu took his goats to graze near a local river, all five goats were dead. The autopsy revealed the deaths were from pesticides. Nderitu blames the enormous Del Monte pineapple plantation just across the river from where his goats grazed.

Access to land is another issue for Kenyan farmers. While farmers like James try to coax a living from a fraction of an acre, nearby Del Monte grows pineapples on several thousand acres. Locals report that they pay their workers a mere $2.40 a day, less than the minimum wage, but actually more than the $2.05 per day the other large farms in the area pay. Mwangi, who lives within sight of Del Monte’s land, feels ill whenever they spray pesticides. The land could likely support more farmers, and more successful farmers, if it wasn’t concentrated in the hands of a few corporations.

And one more request: Would the industrialized world please stop wreaking havoc with the climate! Sidney Quntai, a Maasai man, says, “In the last ten years… the climate pendulum shifted. Just took a drastic turn.” The Maasai are semi-nomadic pastoralists, relying entirely on raising cattle, sheep and goats in Kenya’s arid and semi-arid areas. The droughts and flash floods of the last decade have brought invasive weeds and new livestock diseases to his people, and some families have had their herds wiped out entirely between the droughts and diseases of the last decade.

The new G8 scheme to help African farmers does nothing to address the problems that are at the core of hunger and malnutrition. More likely, it will serve only to further poverty and inequality across the continent. The elites of the first world work together with the elites of the third world in the name of helping peasant farmers, but it nobody consults the peasant farmers themselves. Perhaps Obama could spend a week or two living with his Kenyan family members to find out what they actually want and need before he suggests another program to “help” the people of Africa.

Jill Richardson is the founder of the blog La Vida Locavore and a member of the Organic Consumers Association policy advisory board. She is the author of Recipe for America: Why Our Food System Is Broken and What We Can Do to Fix It.