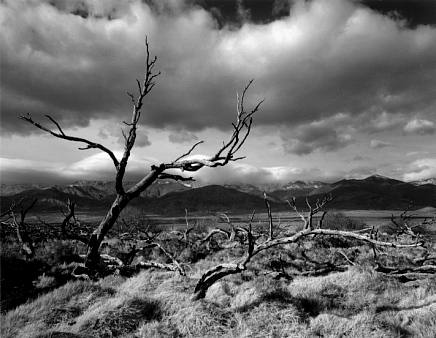 Although there is an urban legend that the world will end this year based on a misinterpretation of the Mayan calendar, some researchers think a 40-year-old computer program that predicts a collapse of socioeconomic order and massive drop in human population in this century may be on target…

Remember how Wile E. Coyote, in his obsessive pursuit of the Road Runner, would fall off a cliff? The hapless predator ran straight out off the edge, stopped in midair as only an animated character could, looked beneath him in an eye-popping moment of truth, and plummeted straight down into a puff of dust. Splat! Four decades ago, a Massachusetts Institute of Technology computer model called World3 warned of such a possible course for human civilization in the 21st century. In Limits to Growth, a bitterly disputed 1972 book that explicated these findings, researchers argued that the global industrial system has so much inertia that it cannot readily correct course in response to signals of planetary stress. But unless economic growth skidded to a halt before reaching the edge, they warned, society was headed for overshoot—and a splat that could kill billions.

Don’t look now but we are running in midair, a new book asserts. In 2052: A Global Forecast for the Next Forty Years (Chelsea Green Publishing), Jorgen Randers of the BI Norwegian Business School in Oslo, and one of the original World3 modelers, argues that the second half of the 21st century will bring us near apocalypse in the form of severe global warming. Dennis Meadows, professor emeritus of systems policy at the University of New Hampshire who headed the original M.I.T. team and revisited World3 in 1994 and 2004, has an even darker view. The 1970s program had yielded a variety of scenarios, in some of which humanity manages to control production and population to live within planetary limits (described as Limits to Growth). Meadows contends that the model’s sustainable pathways are no longer within reach because humanity has failed to act accordingly.

Instead, the latest global data are tracking one of the most alarming scenarios, in which these variables increase steadily to reach a peak and then suddenly drop in a process called collapse. In fact, “I see collapse happening already,” he says. “Food per capita is going down, energy is becoming more scarce, groundwater is being depleted.” Most worrisome, Randers notes, greenhouse gases are being emitted twice as fast as oceans and forests can absorb them. Whereas in 1972 humans were using 85 percent of the regenerative capacity of the biosphere to support economic activities such as growing food, producing goods and assimilating pollutants, the figure is now at 150 percent—and growing.

Randers’s ideas most closely resemble a World3 scenario in which energy efficiency and renewable energy stave off the worst effects of climate change until after 2050. For the coming few decades, Randers predicts, life on Earth will carry on more or less as before. Wealthy economies will continue to grow, albeit more slowly as investment will need to be diverted to deal with resource constraints and environmental problems, which thereby will leave less capital for creating goods for consumption. Food production will improve: increased carbon dioxide in the atmosphere will cause plants to grow faster, and warming will open up new areas such as Siberia to cultivation. Population will increase, albeit slowly, to a maximum of about eight billion near 2040. Eventually, however, floods and desertification will start reducing farmland and therefore the availability of grain. Despite humanity’s efforts to ameliorate climate change, Randers predicts that its effects will become devastating sometime after mid-century, when global warming will reinforce itself by, for instance, igniting fires that turn forests into net emitters rather than absorbers of carbon. “Very likely, we will have war long before we get there,” Randers adds grimly. He expects that mass migration from lands rendered unlivable will lead to localized armed conflicts.

Graham Turner of Australia’s Commonwealth Scientific and Industrial Research Organization fears that collapse could come even earlier, but due to peak oil rather than climate change. After comparing the various scenarios generated by World3 against recent data on population, industrial output and other variables, Turner and, separately, the PBL Netherlands Environmental Assessment Agency, conclude that the global system is closely following a business-as-usual output curve. In this model run the economy continues to grow as expected until about 2015, but then falters because nonrenewable resources such as oil become ever more expensive to extract. “Not that we’re running out of any of these resources,” Turner explains. “It’s that as you try to get to unconventional sources such as under deep oceans, it takes a lot more energy to extract each unit of energy.” To keep up oil supply, the model predicts that society will divert investment from agriculture, causing a drop in food production. In this scenario, population peaks around 2030 at between seven and eight billion and then decreases sharply, evening out at about four billion in 2100. Meadows holds that collapse is now all but inevitable, but that its actual form will be too complex for any model to predict. “Collapse will not be driven by a single, identifiable cause simultaneously acting in all countries,” he observes. “It will come through a self-reinforcing complex of issues”—including climate change, resource constraints and socioeconomic inequality. When economies slow down, Meadows explains, fewer products are created relative to demand, and “when the rich can’t get more by producing real wealth they start to use their power to take from lower segments.” As scarcities mount and inequality increases, revolutions and socioeconomic movements like the Arab Spring or Occupy Wall Street will become more widespread—as will their repression.

Many observers protest that such apocalyptic scenarios discount human ingenuity. Technology and markets will solve problems as they show up, they argue. But for that to happen, contends economist Partha Dasgupta of the University of Cambridge in the U.K., policymakers must guide technology with the right incentives. As long as natural resources are underpriced compared with their true environmental and social cost—as long as, for instance, automobile consumers do not pay for lives lost from extreme climatic conditions caused by warming from their vehicles’ carbon emissions—technology will continue to produce resource-intensive goods and worsen the burden on the ecosystem, Dasgupta argues. “You can’t expect markets to solve the problem,” he says. Randers goes further, asserting that the short-term focus of capitalism and of extant democratic systems makes it impossible not only for markets but also for most governments to deal effectively with long-term problems such as climate change.

“We’re in for a period of sustained chaos whose magnitude we are unable to foresee,” Meadows warns. He no longer spends time trying to persuade humanity of the limits to growth. Instead, he says, “I’m trying to understand how communities and cities can buffer themselves” against the inevitable hard landing.