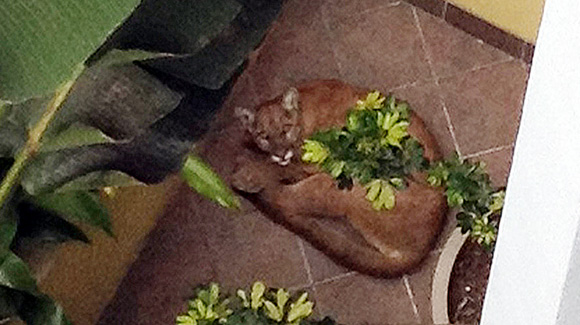 In the end, the mountain lion was probably looking for a place to call his own.

Scientists believe the male mountain lion roamed his way down the Santa Monica Mountains early Tuesday, likely following a runoff channel. When daylight broke, he found himself in the middle of the city and scared.

The lion was 3, and experts said that was the age to carve out his own territory.

“These young guys are looking for a home of their own,” said Jeff Sikich, a biologist with the National Park Service. “At this age, they are testing their boundaries and establishing their home range away from other males.”

Officials on Wednesday were studying hair and tissue sample and preparing genetic analysis that could help shed more light on his origins as a debate raged over whether police should have killed the lion.

He and other experts believe the lion was startled as the morning commute began and noise of the city rose. Mountain lions — more so than bears or other animals — are harder to deal with when they enter civilization because they tend to turn aggressive.

“When you stick a dart in a mountain lion, it becomes agitated. A 90-pound mountain lion can easily take down a 200-pound deer,” said Kevin Brennan, a wildlife biologist with the California Department of Fish and Game.

But that case caused none of the furor of the shooting, which on Wednesday led to calls for independent investigations and policy changes.

Animal rights activists and others questioned how authorities were able to tranquilize and safely remove a 400-pound bear that had frequented Glendale last month, but not able to do the same for the feline.

“They could have done more to help this animal live,” said Rachel Hoffman, 64, of Marina del Rey. “It’s just a big cat.”

The mountain lion was first seen shortly before 6 a.m. Tuesday walking along Arizona Avenue. A janitor spotted him in the U-shaped courtyard of an office building, pawing at a glass door. The animal tried to approach the janitor, but he ran and called police.

Authorities made several attempts to contain the mountain lion in the courtyard, said Andrew Hughan, a spokesman for Fish and Game.

Wildlife agents fired several tranquilizing darts at the animal as the animal moved in the small space. Only one dart pierced the cat, he said. The animal became aggressive and tried to flee the courtyard, which was near a preschool.

“The more agitated the animal is, the longer it takes for the immobilizing drug to take,” Brennan said. “You have to note the behavior of the animal after 10 minutes” and possibly administer more drugs.

Officers used non-lethal bullets and firefighters employed a water hose to contain the lion while they waited for the drug to take effect. During that time, the animal got close to a Santa Monica police officer and it was fatally shot.

Police have said they killed the cat to protect the public, noting that the cat could have harmed children and shoppers in the bustling Santa Monica downtown district.

For a decade, the National Park Service has been monitoring the habits of the cougars living in the Santa Monica Mountains. Biologist are tracking five lions with GPS radio collars. The slain mountain lion was one of a handful not outfitted with a tracking device.

Mountain lions rarely wander into urban communities, scientists said. But the animals have less room to roam as development encroaches on the their land.

“To be a mountain lion is to roam, and you can’t disperse across Southern California without running into a city like Santa Monica,” Brennan said.