Human activities have put the ocean in serious trouble. A bold, Rights of Nature-based proposal aims to turn the tide.

by Tracy Keeling / The Revelator 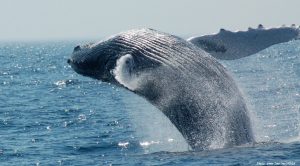 [This article was originally published October 3, 2022. Sign up for The Revelator newsletter here.]

Lisbon sits at the mouth of the Tagus River where it flows into the Atlantic. This confluence of waters welcomed thousands of people in June, who gathered in the Portuguese capital’s Altice Arena for the second United Nations Ocean Conference.

“Sadly, we have taken the ocean for granted, and today we face what I would call an Ocean Emergency,” UN Secretary-General António Guterres said at the opening of the conference, which aimed to mobilize science-based solutions to the crisis. “We must turn the tide. A healthy and productive ocean is vital to our shared future.”

Human actions have burdened the ocean and its inhabitants with serious problems, including more acidic and hotter waters from emissions and global warming, which represent existential changes for many ocean-dwelling organisms. Meanwhile overfishing, pollution and industrial activities have depleted and damaged ocean ecosystems. Through these combined threats, we’ve robbed marine communities of their resilience at the very moment they need it most.

Could granting the ocean inalienable rights help turn all of that around — and protect people who depend on the ocean in the process?

Experts at the conference argued that a declaration of oceanic rights from the United Nations could recognize the ocean as a living entity that has its own inherent entitlements, such as those to life and health, along with the right to continue its vital natural cycles.

Participants included representatives of the Earth Law Center, a Colorado-based nonprofit dedicated to the growing Rights of Nature movement. The organization has spent the past five years spearheading the concept of ocean rights.

In 2017 the center secured support from more than 70 nonprofit organizations in 32 countries for its Ocean Rights Initiative. That year, at the UN’s first ocean conference, then-executive director Darlene Lee explained that the initiative recommended “the United Nations governments, organizations and stakeholders, promote and adopt holistic and rights-based governance of the ocean, including incorporating the inherent rights of the ocean into law and policy.”

There’s historic precedent for establishing far-reaching rights principles through the United Nations. In 1948 the UN passed the groundbreaking Universal Declaration of Human Rights, which enshrined certain rights and freedoms — such as liberty and equality — as basic entitlements of all people across the globe.

Although that declaration of human rights is not legally binding, Earth Law Center oceans campaign director Michelle Bender says it has served as a powerful tool for embedding human-rights principles in laws and policies, including international treaties, national constitutions, and legal codes around the world.

Similarly, this summer the General Assembly adopted a groundbreaking resolution declaring access to a clean and healthy environment as a universal human right. And in 2010 a resolution was passed on the human right to water and sanitation.

Activists hope to extend the notion to the ocean we all share.

The effort took a step forward at the UN Ocean Conference, where The Ocean Race — a round-the-world sailing contest that also advocates for a healthy ocean — organized a panel discussion where advocates could discuss ways to advance the declaration and raise awareness of its importance.

Addressing a packed audience, speakers argued that establishing legal rights for the ocean could start a cascade of societal shifts in peoples’ attitudes toward, and understanding of, the ocean. They called on the public to urge their UN ambassadors to support ocean rights and get a declaration on the UN’s agenda.

Although these speeches were given in a dimly lit, hushed venue — one of two adjacent rooms where everyone had to listen through headphones so as not to disturb proceedings next door — the audience was enthusiastic. Many attendees clustered around the speakers as the event came to close, eager to hear more.

Experts and national leaders speaking at the panel, and those I talked to after the event, said the declaration would prioritize the ocean’s interests alongside those of people.

This is a fundamentally different approach from most of today’s ocean-related decision-making, which is typically “anthropocentric in nature,” says marine biologist Guillermo Ortuño Crespo, who attended the event. He’s not involved in the ocean rights initiative, but his research has involved scrutiny of management of the ocean. He says the current approach puts humanity at the center, valuing and protecting the marine environment based on the services it provides to people.

Crespo describes this anthropocentric paradigm as “a limited value system that psychologically removes us from nature.”

Other experts said a declaration of ocean rights could upend that value system by giving the ocean a voice. It would represent, in Bender’s words, “a fundamental shift in our relationship with the ocean.”

Granting the ocean legal rights would be a step toward “a more ecocentric value system,” Crespo says, “which is still upheld by innumerous coastal and Indigenous peoples… READ MORE.