[EF! Newswire Editor’s Note: By using the link below, you can send a personalized letter to some bureaucrats about protecting mature forests and send a few tweets around about it… Then you should go out and build a treesit in every 80+ year-old tree on federal land until they are all protected.] 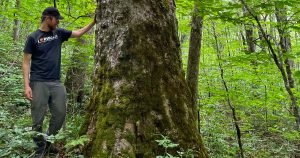 On Earth Day this year, President Biden directed the U.S. Forest Service and Bureau of Land Management to conserve old-growth and mature forests as a climate solution. It was a historic step toward meaningful protections for forested federal lands.

Ending the logging of mature forests and trees on federal public lands is a key strategy for curbing climate change — while also protecting biodiversity and healthy watersheds. Mature forests hold enormous amounts of carbon, safely stored in trunks, branches and soil. Left to grow, they will store even more. Yet federal agencies routinely target these carbon-storing heroes for logging.

But there’s a solution. Defining “mature” forests and trees as those 80 years of age and older, and then protecting them, would spare our most climate- and carbon-critical forests.

Tell the Forest Service and BLM that these trees are worth more standing than cut down — they must protect these climate champions.

To protect climate-critical forests from logging, “mature” forests and trees should be defined as 80 years old. Only in rare circumstances should the logging of these giants, which store massive amounts of carbon, be allowed.

Mature forests and trees 80 years and older in age contain the bulk of the carbon stored in federal forests and continue to sequester carbon at high rates. They also provide vital habitat for endangered species and protect important sources of our drinking water. Safeguarding mature forests and trees now will help recover old-growth ecosystems across the country that have largely been lost to logging.

I was dismayed to read a recent USDA Secretarial Memorandum that inaccurately stated, “A primary threat to old-growth stands on national forests is no longer timber harvesting, but rather catastrophic wildfire and other disturbances resulting from the combination of climate change and past fire exclusion.” This is untrue. There are numerous examples of logging projects across the country that target mature and old-growth forests for timber production in the name of “restoration,” “hazardous fuels reduction” and “wildfire mitigation.” Logging mature and old-growth federal forests is a destructive activity that must be stopped — and it’s entirely within the power of federal land-management agencies to do so.

Scientists agree that logging older, large, fire-resistant trees does not mitigate wildfire risk. Older trees generally are more resistant to fire than younger trees because of their size and thicker bark. Even after a fire, they retain most of their carbon.

Federal funding has significantly increased for forest thinning, including commercial logging. Therefore, a rulemaking to protect mature and old-growth forests and trees is more urgently needed than ever.

To limit atmospheric carbon levels and demonstrate international climate leadership, the Biden administration must protect mature forest and trees through binding regulations that will endure in future administrations, similar to the Clinton-era Roadless Rule. I urge you to begin this rulemaking as soon as possible.

Sincerely,
[What you want to be called when you’re not being chased by cops.]
Posted in Forest Defense, Lawsuits and Paperwrenching and tagged Center for Biological Diversity, climate change, environment, forest defense.