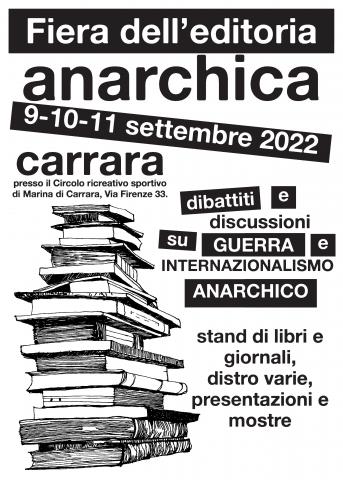 Program of the anarchist publishing fair to be held in Marina di Carrara from September 9-11, 2022 at the Circolo Recreational Sports, via Firenze 33.

17:30 – Presentation and discussion by the Anti-Repression Fund of the Western Alps of the book by Claudio Lavazza, “Pestifera la mia vita.”

10:30 – Meeting and discussion with some editors of the fortnightly Bezmotivny on the topic “Interesting times. Anarchist internationalism and war.”

16:30 – Meeting and discussion with some editors of the anarchist magazine “Days and Nights” on the theme “The flight forward of capitalism. Crisis, war and permanent emergency, the role of techno-sciences.”

10:30 am – Meeting on State repression against anarchists: from the Scripta Manent trial to the political use of 41 bis . We discuss the need for international solidarity that defends revolutionary practices and reaffirm the reasons for our struggle, starting with the reflections in the book “The class war in Spain: 1973. Gangsters or revolutionaries?”

3:30 pm – Presentation and discussion by the Nihilist Oltreist Front of the aperiodic “Il Subversivo.”

For all three days, display of information panels and setting up of stands and stalls of books, brochures, newspapers, magazines and various material.

On September 1, 2 and 3, at the town house of Xixón (C\LLanes 11), the anarchist bookfair will take place. One more year, the aim is to give a voice to different projects that do not have a place in the system’s media. A breath of fresh air needed to lift your head. Giving up is never an option. Where there is power there will be resistance, where there is oppression there will be rebellion, where there are those who want silence there will be people willing to shout.

Here you can download the program in PDF: https://asturies.noblogs.org/files/2022/08/Programa-VIII-Alcuentru.pdf

An exhibition that tries to recover the forgotten history of the Free Women organization, a women’s group that emerged within the libertarian movement during 1936, whose purpose was to unite working class women to fight for their emancipation.

With that objective, Mujeres Libres developed a vast program dedicated to raising awareness and elevating the culture of women through education and job training; With this, they intended to overcome what they called the triple slavery of working women: that of her ignorance and that derived from her due to her condition as a woman and worker.

The exhibition is made up of 16 panels, in addition to sound and audiovisual materials, with information on the gestation and development of the organization, its claims and fields of action, its approaches to equality, education, work, sexuality and the active participation it developed to win the war against fascism.

Presentation by Yanira Hermida and Alba Torres, anarchist and feminist militants, Alvaro del Rio, Regional Secretary of the CNT, and REVERSO, who will entertain with poetry and music.

18:30 Round table Fanzines and counterculture.

Pages of creativity, cheeky notes and something called freedom. The fanzines, those publications halfway between satirical madness and thematic genius, will have their space in the alcuentru. Desktop publishing, do it yourself and share it with your friends. Mario will moderate the table where the various periodicals that abound in Asturies will be presented.

Opened the road to freedom by poetry, its subversive action is automatically established. Poetry then becomes an instrument of struggle for a human condition in line with the total aspirations of people. Poetry means breaking the ties created by the closed world of the conventional.

Latent or concrete, the subversion contained in authentic poetry offers no doubt, it is here to remind us of the inalienable rights of humanity. Open mic presented by Mariano

12:30 “Something or someone? The need to question the vision of power” Andrea Fano Muñiz.

We believe that it is important to write about oppression, and more so if it is one of the less visible oppressions, that of speciesism. Considering beings of other species someone and not something is a huge qualitative leap, which affects our daily relationships in aspects as basic as our diet or our way of understanding leisure. This book aims to open windows so that new air allows us to feel in a different way the power relations that the human species exercises over all existing animal species.

Economy can be defined as “right and prudent administration of goods”. But that definition is completely unreal. The whole set of measures that the system has been putting into practice year after year, make the majority of people poorer and increase the benefits of a minority.

We are in the hands of an economy that prevents a dignified life for the majority and that plunders natural resources always with the aim of generating economic benefits. A so-called Free Market economy, which creates tax havens for money, encourages the free circulation of financial capital, but puts up walls with concertinas on its borders and surveillance systems on the seas so that people fleeing from wars do not arrive. and misery.

Given this situation, another economic model is necessary that allows fair relationships and that does not destroy Nature, the Common Goods that belong to us, but that also belong to future generations. That puts life at the center by uniting the collective initiatives that create new relationships between people, peoples and the nature that sustains us.

Pelayo will speak to us about this Social and Solidarity Economy.

The media, educational institutions and the culture and entertainment industry have made everyone consider it an indisputable truth that human beings are evil by nature. And yet, people seem to enjoy cooperating. Isn’t it paradoxical that we are social beings and yet our essence is evil? Kropotkin as a thinker, put in check the theories that pointed out the competitive essence of the human being. However, his legacy is not limited to this fundamental contribution, since he stood out as a geographer, as a historian, as an anthropologist and, of course, also as a revolutionary who tested the harshness of the prisons of his time. This book is a set of studies that brings us closer to the figure of the Russian theoretician from different fields of knowledge.

85 years ago Asturias was left alone in the middle of the earth. By land, sea and air, at the beginning of September 1937, fascism fell under our people. But those indomitable people, tanned in a thousand battles, were going to let themselves be crushed without standing up in one.

In numerical and military inferiority, with little ammunition, you were bombarded by the Nazis of the Condor Legion… 21 days they have endured clinging to the Sierra del Cuera, looking death in the face.

Many died there. Many others were imprisoned, such as Higinio Carrocera, shot on May 8, 1938 in Oviedo. Others went into exile and others threw themselves into the bush.

We will speak with Guillermo about the battle of Mazucu, about Thermopylae in Asturias, about all those heroic people from whom we have so much to learn. And also about the process of creating the graphic novel and how we can lend a hand among all so that it sees the light.