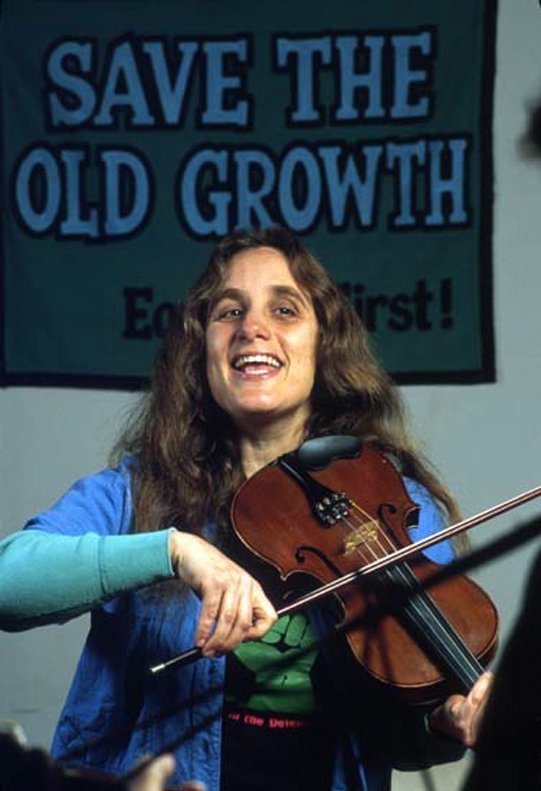 Oakland, CA—The 31st anniversary of the bombing of Judi Bari and Darryl Cherney is May 24, 2021. For years, Judi’s comrades, supporters and others in the Bay Area commemorate that event every year by going to the place where the bomb exploded under Judi’s car seat as she drove through Oakland, to mark the moment. The date is marked by friends, family, comrades and environmental and social justice activists as a memory against forgetting.
The location is on Park Blvd. at E. 34 St. in Oakland, below Oakland High School and near MacArthur Blvd. The time of the explosion that nearly killed Judi and injured Darryl was about noon. People will gather at 11:30 am this coming Monday, observing COVID protocols.
Judi Bari, who died in 1997, was ahead of her politically, besides being one of Earth First!’s most effective organizers, a musician, labor organizer and mother of two daughters.
Judi Bari said, many years ago, “Starting from the very reasonable, but unfortunately, revolutionary concept that social practices which threaten the continuation of life on Earth must be changed, we need a theory of revolutionary ecology that will encompass social and biological issues, class struggle, and a recognition of the role of global corporate capitalism in the oppression of peoples and the destruction of nature. I believe we already have such a theory. It’s called deep ecology, and it is the core belief of the radical environmental movement.”
Her perspective and analysis shed light on why she was considered dangerous to the corporate status quo and targeted.
The capsule history:
On May 24, 1990, a pipe bomb planted in the car of Earth First! activist Judi Bari exploded, sending her and fellow activist Darryl Cherney to the hospital in Oakland—Judi with life-threatening injuries, since the bomb had been hidden directly under her driver’s seat.  Judi and Darryl were on their way to an organizing event, for Earth First! Redwood Summer.  That explosion, and the subsequent attack on Earth First! as well as Judi and Darryl, by the FBI and Oakland police would forever change the face of forest activism in the redwoods and elsewhere.
The bomber was never found, partly because the FBI never conducted a serious investigation, instead blaming and harassing Earth First! activists, attempting to frame Bari and Cherney for bombing themselves.  A lawsuit filed by Judi and Darryl against the FBI and OPD for violation of Constitutional rights was ultimately successful in 2002, finding that the FBI and OPD had violated the pair’s Constitutional rights by falsely arresting and attempting to frame them, and vindicated Darryl and Judi. The legal victory, however, came five years after Judi’s untimely death from breast cancer at the age of 47.
Redwood Summer was a mass mobilization of students and others who came from across the U.S. to protest the deforestation of the redwood region in Northern California, being decimated by the corporate chain saw.  It was modeled after civil rights mobilizations in the south in the 1960s—to shed light on what was happening in rural, sparsely populated areas. The summer of civil disobedience and protest in the forests did proceed, in spite of the monumental disruption caused by the bombing and attempts to frame and tear apart Earth First!, and changed the face of direct action organizing at the time.
The feature length film,  “Who Bombed Judi Bari?” produced by Darryl Cherney and MaryLiz Thomson is now on YouTube. It tells the story of the bombing, Redwood Summer, Earth First! and much more.
https://www.youtube.com/watch?v=HWApxvSjMKY&t=2069s
See also:
Judi’s essay “Revolutionary Ecology,” where she discusses biocentrism in the context of radical social change thinking (e.g., Biocentrism Contradicts Capitalism, Biocentrism Contradicts Communism, and Biocentrism Contradicts Patriarchy), can be found in its entirety at the link http://www.judibari.org/revolutionary-ecology.html
Posted in Earth First! History, Fallen Warriors.