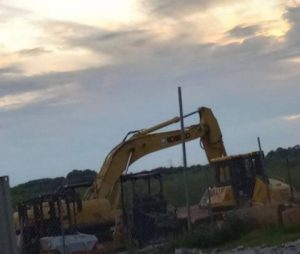 charred remains of a machine amidst other destroyed construction equipment

This is a story about a couple of queers who gathered last night to reject destruction in the name of profit and power and to destroy the machinery of the nefarious polities that have defiled the Atlanta Forest. We have deep respect and regard for acknowledging that this is Muskogee land and was the site of horrific abuses, of displacement, chattel slavery, and prison slavery.

They set out meandering through the forest touching undergrowth, brush, breathing the cleanest air in the city, feeling the wetland take them in as their heels sunk beneath them. After a short walk, they reached an artificial break in the embrace of the forest. They found themselves upon the intrepid mound of dirt, a site of destruction, a jarring crack in the rythym of the forest. In the distance, 7 ungaurded machines were illuminated by the moonlight. They knew what they had to do.

As hammers met windows and knives cut tubing, the undoing of the mechanical monsters that had violated the forest begun. No tool of the evildoers went unharmed. Many antagonistic and proclamatory messages were left by the hissing sound of rattling cans. In little time, the moon was far from the only light that shone over the mound of dirt left by the machines destruction. The splash of gasoline as an extension of the blood that fuels the burning fire in their hearts became alight with the rage that they felt. By the time the fire department took notice, the deed was done and the culprits had already dissipated into the night like the curling black smoke that drifted into the sky. It was upon unusable machines that the fires were extinguished. Fires are temporary and can be undone. The connection that those who live in a forest, who breathe its air, and who drink water filtered in its wetlands is not so easily broken.

We hope that in telling our story, we can call you to our side in defending the Atlanta Forest, and inspire others to be dangerous towards everything that wages war on our bodies, on the earth, and on our very lives.
We are outraged by the destruction already done to the Atlanta forest by Blackhall Studios and the so-called governments that gave them permission.
We will not allow any further destruction; We will not allow The so-called City of Atlanta to build a horrific 300-acre training facility for police that they will call the “Institute For Social Justice.”
We will not abide the destruction of the Old Atlanta Prison farm, furthering erasing history and concealing the connection and transition between chattel slavery and modern prison slavery.
We condemn the swapping of the 250 acres of beautiful forest that Blackhall Studios destroyed when they thought they could develop the wetland.
We condemn Blackhall Studios hasty cover-up: the proposed “Michelle Obama Park” that will sit on the mound of dirt they left in their wake. We will not allow them to destroying any more forest for the building of a massive soundstage.
We don’t need a soundstage for entertainment. Everything we need is already there.
We don’t need police training facilties. We demand an end to policing.

To the developers, governments, contractors, corporations, and politicians that perpetrated the heinous deforestation of the part of the forest along “Bouldercrest Road,” there’s something you should know.
Any further attempts at destroying the Atlanta Forest will be met with similar response. This forest was here long before us, and it will be here long after.
We’ll see to that.