“We won’t be social distancing,” said the South Dakota governor. 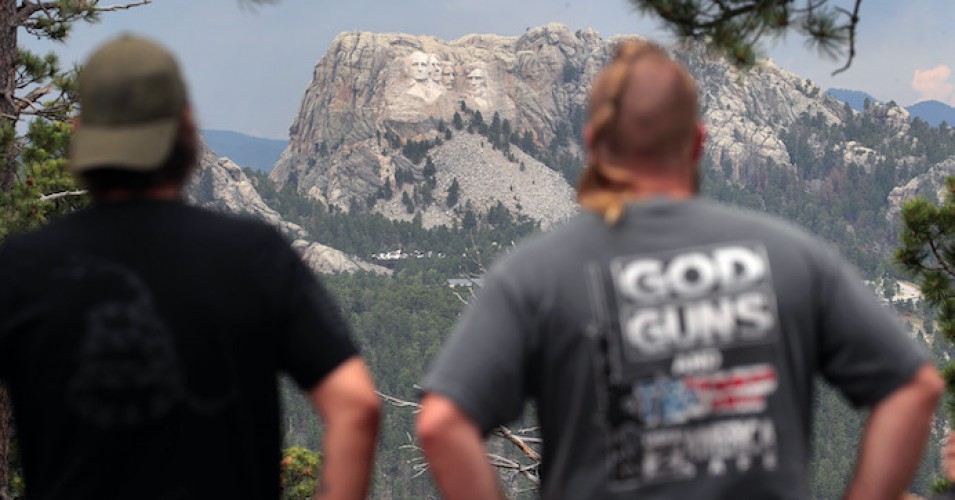 Visitors look at Mount Rushmore National Monument on July 02, 2020 near Keystone, South Dakota. President Donald Trump is expected to visit the monument and speak before the start of a fireworks display on July 3. (Photo: Scott Olson/Getty Images)

President Donald Trump’s planned July 3 fireworks ceremony at Mount Rushmore is facing sustained criticism over its risks to public health and the environment and is being rebuked as “an attack on Indigenous people.”

A crowd of 7,500 people is estimated for the gathering at the South Dakota mountain carving, where public health guidelines to contain the coronavirus won’t be enforced.

“We told those folks that have concerns that they can stay home, but those who want to come and join us, we’ll be giving out free face masks if they choose to wear one,” Republican South Dakota Gov. Kristi Noem told Fox News Monday. “But we won’t be social distancing.”

Costs for the pyrotechnics will be footed by state taxpayers.

Among the voices in the chorus of criticism over the event comes from the Firefighters United for Safety, Ethics, and Ecology (FUSEE), with the group citing the risk of wildfires and spread of Covid-19.

“Trump is dead set on having his fireworks show in the midst of high fire danger and the pandemic that is surging across the country,” Michael Beasley of FUSEE said in a Thursday statement. “This is just another example of how frontline workers and first responders—in this case wildland firefighters—are treated like expendable props for the amusement of Donald Trump and his fans.”

“While communities across the country have rightly and responsibly cancelled their local fireworks shows in order to reduce the spread of Covid-19 and to prevent wildfire ignitions, Trump arrogantly forges ahead with his phony display of patriotism that will needlessly put firefighters and citizens at extra risk,” added Beasley. “The best thing we can hope for is that it rains on Trump’s charade.”

Phil Francis, chair of the Coalition to Protect America’s National Parks, expressed similar concern, calling the event “ill-advised and unsafe, particularly as we continue to grapple with the ongoing impacts of Covid-19.”

“The National Park Service decided years ago to end this program for very good reasons,” said Francis, pointing to “enormous and detrimental impacts on employees and routine operations that affected the overall quality of visits prior to, during, and after the event.”

“There was measurable pollution of groundwater which has gradually been improving since the cessation of the event in 2009,” he added. “Abnormally dry conditions in the Black Hills means that the risk of a devastating and expensive wildfire is even higher than usual.”

Yet the National Park Service appears to have downplayed the risks.

As Adam Federman reported last week for Sierra Magazine and Type Investigations, the effects on the pandemic were left out entirely and safety risks removed from final drafts of the NPS environmental analysis of the event. From Federman’s reporting:

According to documents obtained through a Freedom of Information Act request, two earlier drafts of the environmental analysis for the event, from December 2019 and January 2020, included a four-page section on “human health and safety.” But in the final version, which was released in February and approved in April, that section had been removed from the document—a potential violation of federal law that could leave the department legally vulnerable.

Among the draft recommendations were that the crowd size be limited to 2,000. “None of these concerns or recommendations are included in the final environmental assessment.” Further, Federman wrote,

The drafts noted that “conditions have steadily deteriorated” across the Black Hills National Forest and that a major fire would “severely impact” the ecology of the region, including surface vegetation and old-growth trees.

That text does not appear in the final version of the assessment. Instead, the assessment concludes that a fireworks display “would contribute minimally to wildfire risk” in the area, if mitigation measures, such as prescribed burns and tree thinning, are followed.

Tribal leaders, who’ve long denounced the monument in and of itself as an homage to racist federal policies—including theft of the land Mt. Rushmore sits on—also voiced sharp concern over Trump’s visit to the site.

Chairman of the Cheyenne River Sioux Nation Harold Frazier said he’d happily remove the monument on his own, as “Lakota see the faces of the men who lied, cheated, and murdered innocent people whose only crime was living on the land they wanted to steal.” And Oglala Sioux president Julian Bear Runner said Trump “doesn’t have permission from its original sovereign owners to enter the territory at this time,” and warned that the event is “going to cause an uproar.”

The Indigenous Environmental Network released a statement Friday in solidarity with tribal leaders calling for removal of the monument and expressing outrage over the presidential event.

“President Trump’s Fourth of July visit to Mt. Rushmore is a continuation of Indigenous resilience and history being erased from national dialogues. This spectacle is nothing more than a reminder that settler colonialism is alive and well,” said the network.

“Make no mistake, this visit is an attack on Indigenous people,” wrote Nick Tilsen, president of NDN Collective and a citizen of the Oglala Lakota Nation.

In his Friday op-ed at NBC News, Tilsen described Mt. Rushmore as “a monument to white colonizers carved by a Ku Klux Klan sympathizer into land stolen from us by the U.S. government in 1877.”

Referring to the president’s ultimately rescheduled Juneteenth rally in Tulsa, Oklahoma, Tilsen said Trump “is taking his campaign from the site of one of the United States’ most horrific acts of racism to another place with long histories of oppression and state-sanctioned violence.”

“In the midst of a national reckoning on race, the hypocrisy of Mount Rushmore must be interrogated and denounced,” Tilsen said, adding, “If you truly care about fighting our country’s racist history, now is not a day to be silent.”