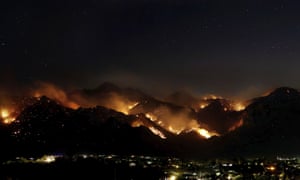 ‘At night you can see basically the outline of the fire on the mountain’: the Bighorn Fire burning in the Santa Catalina Mountains looms over homes in Oro Valley, Arizona, last month. Photograph: Kelly Presnell/AP

For residents of Tucson in southern Arizona, the Santa Catalina Mountains in the Coronado national forest are known as a hub for hiking, mountain biking and other outdoor recreation.

But on 5 June lightning ignited a wildfire that has grown to engulf over 118,000 acres. The fires are still only 58% contained. Called the Bighorn fire, it is the eighth-biggest in state history, and it has transformed the Catalinas into a hub for the study of the impacts of climate change. Nasa satellite photos show large scar marks left by the fire.

“At night you can see basically the outline of the fire on the mountain,” said Courtney Slanaker, the executive director for the American Red Cross Southern Arizona, “and then during the daytime you’re seeing that heavy smoke as it moves through different fuel sources on the mountain.”

And yet, Bighorn is just one of three fires that sit in the top 10 biggest wildfires in Arizona history.

The Bush fire in the Tonto national forest, about 30 miles from Phoenix, now covers 193,000 acres and 98% is contained. It is the fifth-biggest in state history. Meanwhile, the Mangum fire burning in the Kaibab national forest now covers over 71,000 acres and 67% contained. The trio of fires are bigger than Washington DC, San Francisco, Baltimore, Chicago, Miami, Minneapolis and Manhattan combined. Despite the fires’ enormous size, only one home has suffered serious structural damage.

For the Bighorn fire, Mike DeVries, the incident command team public information officer, said it was too early to relax.

“Sometimes you’re just one change in conditions away from having another round of fires,” he said. “All may look well with a fire and then another day arrives and it changes.”

Amber Soja, a scientist at Nasa who studies the links between climate change and wildfires, recently referred to the Bush fire as an “extreme fire” due to the elevation at which the fire burned and the weather which fueled it.

In June, Arizona saw regular daily temperatures of 105-110F. And little rain has fallen so far this summer, despite 15 June marking the start of the state’s official monsoon season.

“This is extreme heat and drought,” Soja said in a video published by Nasa.

Beyond the three major fires, eight others in Arizona are either still burning or were recently contained. One of them, the Blue River fire, is over 30,000 acres and 85% contained, burning on the San Carlos Apache Indian Reservation. Another, the Wood Springs 2 fire, now covers nearly 9,000 acres of the Navajo Nation and is only 5% contained. Both of those fires, like the Bighorn fire, ignited via lightning strikes according to the National Wildfire Coordinating Group.

The wildfires come as tribal nations and Arizona face an uptick in Covid-19 cases. The Navajo Nation has the highest per-capita infection rate in the US, while Arizona currently faces an infection rate of over 28% of those tested.

Recent scientific studies examining England and Italy have linked Covid-19 morbidity to poor air quality of the likes yielded by wildfire smoke. Satellite video published by the National Oceanic and Atmospheric Administration (Noaa) shows that at the peak of the Bighorn fire, smoke was visible from 23,000 miles away. And data from a shared Nasa/Noaa satellite pointed to smoke seen from the Bush fire stretching 63 miles from its center.

The Navajo Nation issued a smoke advisory warning on 1 July, urging all residents to “take precautions to protect their health from the wildfire smoke” coming from the Wood Springs 2 Fire.

The tribe stated exposure to wildfire smoke could lead to an “increase[d] risk of Covid-19 and other respiratory infections” or worsen symptoms in infected patients.

Slanaker, of the American Red Cross, said the agency had adopted social distancing protocols as part of its relief plan, partnering with the tourism booster group Visit Tucson to secure discounts on hotel rooms for those in need if forced to evacuate.

“This is an unprecedented season for us. And while we’re still responding to different fires, they’re not going to take a break for Covid,” said Slanaker. “So, we’ve had to deal with those complexities, and make adjustments.”

Those adjustments include reduced staff, mandatory masks and social distancing protocols in evacuation intake centers, as well as offering prescreening and testing for Covid-19 for clients and staff. The distancing takes a toll for those affected by the fires, Slanaker said.

“A lot of folks that volunteer with us are incredibly compassionate and empathetic people, and to not be able to go up [to survivors] and give a hug and say, ‘Hey, we’re gonna get you through this, we’re here to support you,’ is really challenging,” she said.

“You don’t have that personal touch any more and so you have to find other ways to provide comfort and care, while still implementing those social distancing measures.”