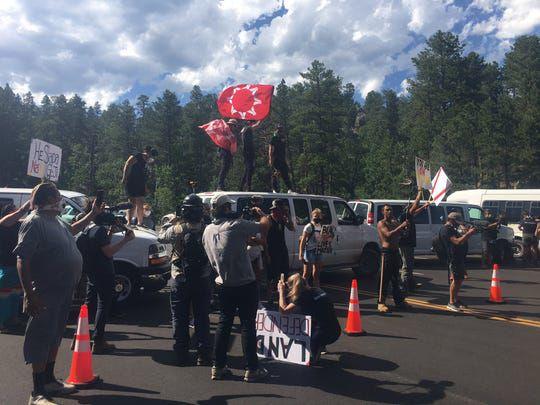 Protesters block Highway 16A outside of Keystone ahead of President Donald Trump’s arrival in the Black Hills for the Mount Rushmore fireworks display. Argus Leader photo by Erin Bormett

Protesters are demonstrating against President Donald Trump’s arrival in the Black Hills ahead of the return of the Mount Rushmore fireworks display Friday night and blocking a road to the monument with vans.

Several vans blocked Highway 16A, or Iron Mountain Road, and protesters stood in the road three hours before President Trump was set to make his way from Rapid City to Keystone and then on the highway to Mount Rushmore.

At 4:30 p.m. MT, authorities declared the protest as an unlawful assembly over a megaphone. Police are demanding protesters vacate the premises or they will be arrested. At 5:15 p.m. MT, at least one person had been arrested, but the road was still blocked.

The National Guard was on scene at 5:20 p.m. MT to help clear the crowd, and several of the protesters dispersed shortly after.

The National Guard fired close range smoke shells on remaining protesters at 5:30 p.m. MT. They donned tear gas masks as well, and pepper spray was used on some of the protesters at 6 p.m. MT, though it wasn’t clear whether the Guard or the Pennington County Sheriff’s Office fired it.

Protesters and law enforcement were still at an impasse as of 6 p.m. MT. The deadline for the Mount Rushmore ticketholders was originally scheduled for 6 p.m., but it is unclear if they will still be able to enter the park after the deadline.

As of 6:10 p.m. MT, tow trucks arrived on scene to remove vehicles blocking the highway. Several of the vehicles are missing wheels intentionally, according to an Argus Leader reporter on scene.

Trump supporters were also on the scene, but authorities were keeping them away from protesters.

The protesters lined the streets near Keystone, a popular tourist area where several “Trump Store” pop-up shops appeared ahead of Trump’s Black Hills visit this weekend. The “Anti-Trump Rally” counters the Fourth of July weekend celebration with demonstrations only about two miles away from Mount Rushmore.

Freddie Longworth, an Oglala Lakota tribe member, attended the protest Friday, saying that his people are “orphans crying in the night” and they will make their voices heard by people who have broken promises to them throughout history.