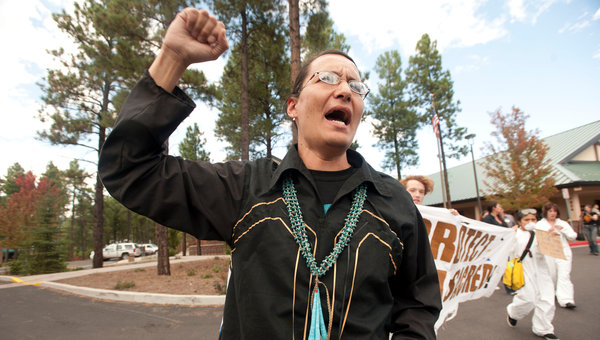 Klee Benally protesting an expansion by the Arizona Snowbowl.

FLAGSTAFF, Ariz. — Klee Benally, a member of the Navajo tribe, has gone to the mountains just north of here to pray, and he has gone to get arrested. He has chained himself to excavators; he has faced down bulldozers. For 10 years, the soft-spoken activist has fought a ski resort’s expansion plans in the San Francisco Peaks that include clear-cutting 74 acres of forest and piping treated sewage effluent onto a mountain to make snow.

But he appears to be losing the battle.

In February, a federal appeals court ruled in favor of the ski resort’s upgrade plans, ending a legal saga fought by a coalition of environmental groups and 13 American Indian tribes, which consider the mountain sacred and view the wastewater snow as a desecration.

This coming ski season, the resort, Arizona Snowbowl, will become the first ski resort in the world to use 100 percent sewage effluent to make artificial snow.

“It’s a disaster, culturally and environmentally,” said Taylor McKinnon of the Center for Biological Diversity, one of the plaintiffs. He worries about the impact on the delicate alpine tundra and to human health should skiers fall into the treated sewer-water snow and ingest it.

The United States Forest Service, which owns the land where the resort is, says the treated water meets the highest standards — just below drinking water — and is already used to irrigate golf courses, soccer fields and parks, according to Corbin Newman, a regional forester.

“Snow-making has become necessary because of climate change,” he said. It allows for a more consistent ski season, bringing money into neighboring Flagstaff, which contracted to sell Snowbowl the water from its sewage treatment plant.

The dispute runs deeper than water. It has erupted into protests, hunger strikes and multiple arrests and has become a political jostling point for Senator John McCain of Arizona and the Obama administration. At one point Snowbowl’s owner, Eric Borowsky, declared that if the resort lost its legal bid to make snow, “radical groups would achieve their ultimate goal of control of our nation’s resources.”

Indeed, the battle has put this picturesque city, about an hour southeast of the Grand Canyon, on the frontier of what many say is the new war for the West’s public lands. It does not involve ranchers, miners or loggers, but centers on the burgeoning outdoor recreation industry, which some say is expanding at the expense of the environment.

Half of all alpine ski areas in the United States, including the big names of Vail, Aspen and Lake Tahoe, are on public land, and many of them are faced with the choice of expanding or going out of business. “A ski resort, to remain competitive, has to hit certain dates. They have to guarantee they’ll be open by Thanksgiving, Christmas at the latest,” said Jim Bedwell, director of the Forest Service’s Recreation and Heritage Resources.

“Everyone does well when the ski area does well,” said J. R. Murray, general manager of Snowbowl.

But Indians, who pray and hold ceremonies on the mountain, feel their concerns are too easily swept aside. “Our culture can still be reduced to something that is less important than the profit margin on a ski resort,” Mr. Benally said. “That’s a very, very hard place to be in.”

The wastewater snow, Indians say, will ruin a mountain they consider sacred ground as well as the ecosystem, a concern shared by environmental groups. When it melts, it “could degrade water quality of the aquifers,” said Rob Smith, regional staff director at the Sierra Club.

City officials, like Brad Hill, Flagstaff’s utilities director, say they have been “very proactive” in ensuring that the water is safe. That is why, in addition to the federal study, the city conducted its own water tests.

It hired Catherine R. Propper, a scientist and professor at Northern Arizona University, who found that Flagstaff’s water contains endocrine-disrupting chemicals, or EDCs, including hormones, antibiotics, antidepressants, pharmaceuticals and steroids.

The substances were not considered in the Forest Service’s impact assessment because federal guidelines do not require doing so, and their nonstatus is part of why Flagstaff can consider its water safe despite Dr. Propper’s findings. Even she is quick to say that “a mouthful of snow is not going to make the difference.”

The Environmental Protection Agency says it is studying the chemicals, and Flagstaff and Snowbowl both say that if they become regulated, the city “will scale treatment to come into compliance,” according to Kevin Burke, city manager.

“It’s an Old West mentality: let’s go forward and assess the damage later,” said Mr. Benally, referring to the unregulated mining that went on for decades and left a legacy of environmental degradation. That reality is particularly acute on the sprawling Navajo Indian reservation bordering Flagstaff, where Mr. Benally grew up. Forty percent of the population there does not have indoor plumbing; one out of three does not have access to clean drinking water.

For now, Flagstaff business owners are gearing up for the ski season, hoping the fake snow will “generate as much as $35 million for the local economy during the winter,” said Julie Pastrick of the Flagstaff Chamber of Commerce.

Asked whether he thinks the protests will continue, Mr. Murray, the Snowbowl manager, expressed a certain weariness with the controversy, saying, “I have no idea.”

Mr. Benally is undeterred. “It’s not over,” he said. “Until the Obama administration addresses the issue, we will continue to lay bodies in front of Snowbowl’s machinery.”