The United States Military, the Pentagon. Most fossil fuel burned, most greenhouse gases released, biggest source of Mercury released into the environment, biggest source of radiological (Uranium, Plutonium) releases and the biggest amount of HAZMAT materials released into rivers, lakes, oceans and the environment and the biggest discarder of medical waste pollution — worldwide.

Retired professor and prolific author Barry Sanders spent a long time looking closely at the US Military where others hadn’t: he looked at the environmental effects and the sheer devastation that the military leaves in its wake. He compiled a frightening collection of numbers into his book The Green Zone. The Earth First! Journal interviewed him back in 2009. The devastation continues. Tracy Turner relates in today’s OpEdNews article, Army That Poisons Together Metastasizes Together — Cruelly and Unusually, the ecological damage of the world’s most destructive force…

US Military pollution gets little notice, as the Pentagon is exempt from the US EPA-reporting criteria. Lead from firing ranges, Uranium from so-called “Depleted” Uranium munitions pollute land, lakes and streams and oceans both domestically and overseas; but the US military is exempt from US EPA Superfund regulations.

Excerpted from Project Censored: “Flounders identifies key examples: – Depleted uranium: Tens of thousands of pounds of microparticles of radioactive and highly toxic waste contaminate the Middle East, Central Asia, and the Balkans*. – US-made land mines and cluster bombs spread over wide areas of Africa, Asia, Latin America, and the Middle East continue to spread death and destruction even after wars have ceased”.

US military policies and wars in Iraq have created severe desertification of 90 percent of the land, changing Iraq from a food exporter into a country that imports 80 percent of its food. – In the US, military bases top the Superfund list of the most polluted places, as perchlorate and trichloroethylene seep into the drinking water, aquifers, and soil. – Nuclear weapons testing in the American Southwest and the South Pacific Islands have contaminated millions of acres of land and water with radiation, while uranium tailings defile Navajo reservations. 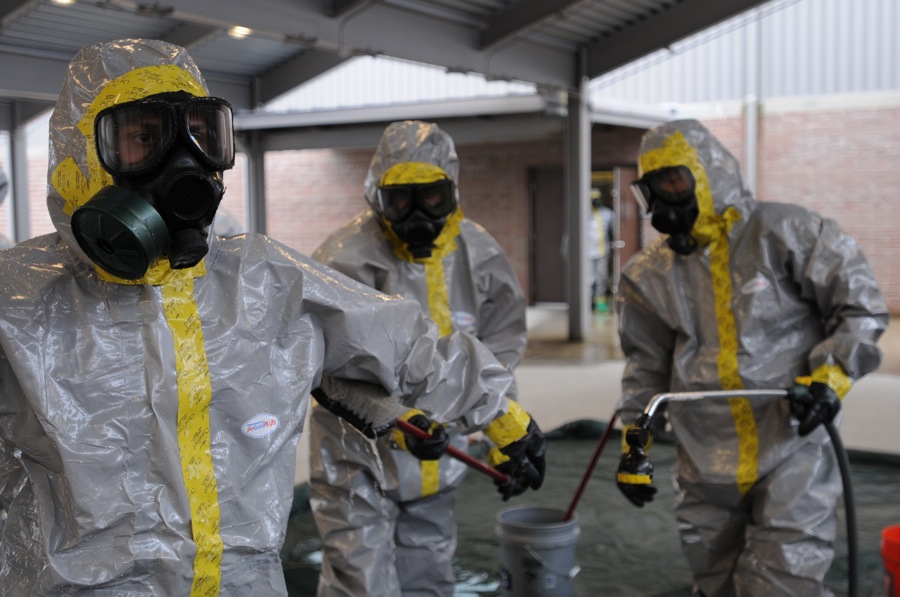 One of the top well-water (aquifer) polluters is Ammonium perchlorate, aka rocket fuel, propellant, Jet-Assisted Take-off, etc. AP as it is know in rocketry slang kills the Thyroid gland, causing people to become hyper or hypothyroid from drinking water. One of the telltale signs in a given community is men with Thyroid disease (this is considered a common women’s disease, when men show up with Thyroid disease there is usually testable AP in the drinking water).

Military hazmat chemicals (Mercury, Ammonium Perchlorate, TCE, medical waste, Depleted Uranium, pesticides, defoliants (Agent Orange), 1-Fluoro-2,4-dinitrobenzene, etc., are the deadliest soldiers the Pentagon has. The people in countries like Iraq know we left our toxic legacy behind; they see it in each new tumor, each deformed or stillborn baby and each stomach cramp after drinking some well water. The well water under our home (Pasadena, California) contains radionuclides and Ammonium Perchlorate from JPL, Rocketdyne and Boeing.

All 50 states have military Superfund pollution sites as well as Guam, US Virgin Islands, Puerto Rico, etc. The US military is in the habit of stonewalling and lying – for examples, both the Big Island of Hawaii and Puerto Rico have Depleted Uranium pollution causing health problems to local people. The military’s way of handling their liability is two fold: there is no Depleted Uranium that we never used for target practice in tanks; even if there was, your illness has nothing to do with our non-admitted to Uranium. Army, Navy, Air Force and Marines personnel affected by Uranium have similar issues getting health care and disability benefits. Those afflicted with DU poisoning are treated as if they are unpatriotic whistleblowers.

From truthout.org article: “In 1997, while citing experiments, by others, in which 84 percent of dogs exposed to inhaled uranium died of cancer of the lungs, Dr. Asaf Durakovic, then Professor of Radiology and Nuclear Medicine at Georgetown University in Washington was quoted as saying, ‘The [US government’s] Veterans Administration asked me to lie about the risks of incorporating depleted uranium in the human body.’ He concluded, ‘uranium does cause cancer, uranium does cause mutation, and uranium does kill. If we continue with the irresponsible contamination of the biosphere, and denial of the fact that human life is endangered by the deadly isotope uranium, then we are doing disservice to ourselves, disservice to the truth, disservice to God and to all generations who follow.’

More than 2,000 nuclear tests have been conducted worldwide; the number of nuclear tests conducted by the US exceeds those tests of all other countries combined. Nuclear fallout from atomic bombs and Uranium oxide ceramic glass dust from DU warfare is becoming widely dispersed globally. The Marshall Islands (Pacific Nuclear Proving Grounds) remain contaminated by nuclear fallout, and many who were living on the Marshall’s at the time of detonations have suffered highly increased incidences of several types of cancers and birth defects.

The primary long-term health hazard associated with exposure to ionizing radiation as a result of nuclear fallout is an increased risk for cancers of the thyroid, other solid tumor cancers, and leukemia, according to the National Cancer Institute.

By the way, the 9/11 WTC aircraft had Depleted Uranium under the floor as ballast. Deny, deny, deny… It is cheaper to deny Depleted Uranium liability than to pay our medical and damages claims. 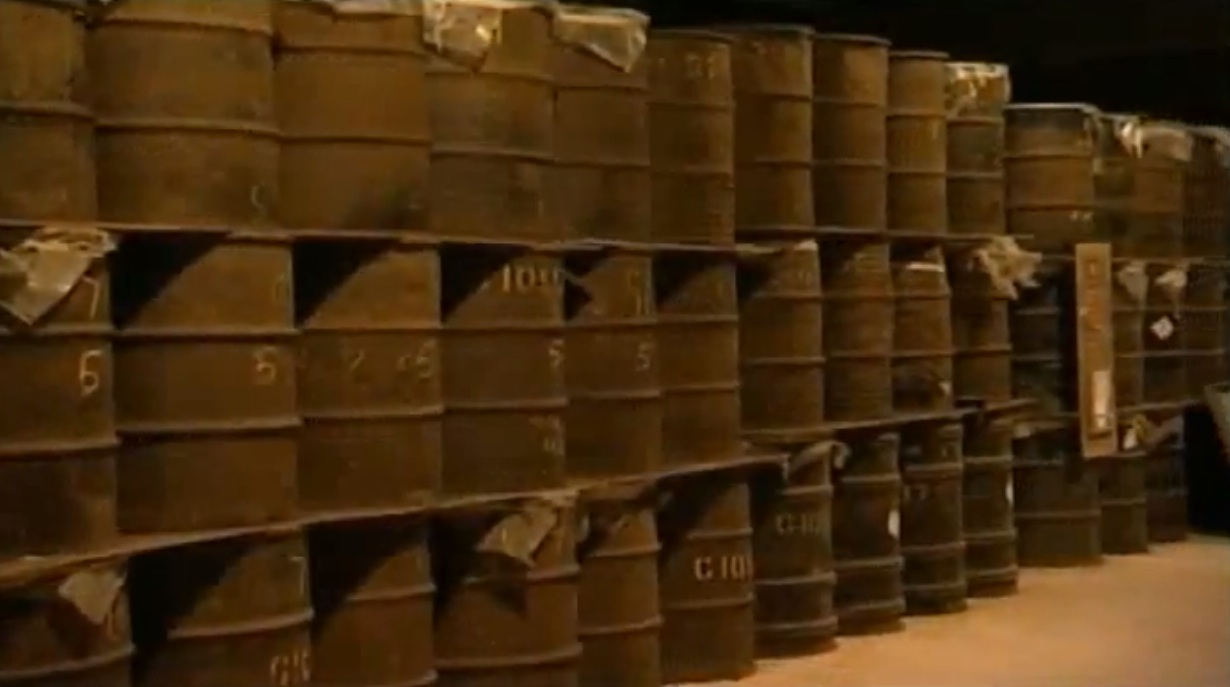 Much of the Military Hazardous Waste is dumped in the ocean or just left behind in Iraq, Afghanistan, etc., illegally. The best chemical soldiers keep killing for 4.6 billion years like Uranium does.

Open Salon had a recent article about the Soviet Union using Chemical Warfare against the Mujahedin in Afghanistan, beginning in 1979.   The Mujahedin considered the Soviets inhuman cowards who killed women and children with chemicals in well water. The US is indiscriminately killing women and children with toxic chemicals (including Depleted Uranium) in well water. General Stanley McChrystal is struggling with US troops indiscriminately shooting civilians.

Insider attacks (murders by Afghan police and troops upon US troops) are getting worse. The mercenaries (Blackwater Xe Mercs will financially occupy long after our troops come home) and Afghans will not coexist amidst abandoned used motor oil, Depleted Uranium hotspots, wells polluted with PCB’s, etc. Newscasters complain that the Afghans do not fight fairly; but the Taliban is fighting a second giant coward who put poison in the air, sea, land, food and water. Meanwhile, the amount of 55-gallon drums of toxic sludge keeps growing larger.

Winning hearts and minds, one HAZMAT toxin at a time. Both the “enemy” and our own troops are metastasizing. Our citizens at home get Leukemia from military nuclear toxic legacy waste. Diane, my wife is one of them, our drinking water has Santa Susana Rocketdyne Uranium in it. Our citizens get Thyroid disease from JATO/Rocket fuel toxic dumps… My thyroid disease is from the JPL Ammonium Perchlorate dumps, again, from drinking water. Military toxic waste is not so anonymous, does not just maim or kill “the enemy”…

Eighth Amendment to US Constitution: Excessive bail shall not be required, nor excessive fines imposed, nor cruel and unusual punishments inflicted — except in cases of extreme rendition under Bush, Obama and potentially Romney.

Except in cases of Drone attacks that kill children, women. Except CIA assassination of Julian Assange and other enemies of state. Except in cases of accidental drowning during water boarding. The military-corporate-government entity reserves the right to add individuals and groups to the above list, marked for kidnapping, torture and murder “at will”. The Eight Amendment is revocable “at will” by the military-corporate-government complex.

By decree of his majesty, Lord Obama, the above acts are now decreed “humane acts” that do not fall under Eighth Amendment parameters; these acts now fall under NDAA section 1021 (2)(b). I, Lord Obama, am due process of law; judge, jury and executioner. My Drone Hellfire missiles contain Uranium, but that is not an Eighth Amendment Cruel and Unusual death sentence, it is humane, NDAA Uranium.

Jean Theoharis wrote “My Student the Terrorist” one year ago April . Chris Hedges wrote this essay on Muslims held in solitary confinement as torture today (1 October 2012), later the same day. Words like solitary confinement sound so clean, much nicer on the tongue than torture.

Writing about Bush, Obama and Romney without writing about kidnap, torture and murder misses the essence of the Bush doctrine carried forward by Obama. Ignoring kneeling in the sun Muslims, chained and shackled and hooded in the hot, Cuban sun ignores torture. Ignoring the drone strikes worldwide ignores mass-murder. Ignoring threats of Syrian and Iranian war ignores threats of murder.

Eighth Amendment to US Constitution: Excessive bail shall not be required, nor excessive fines imposed, nor cruel and unusual punishments inflicted — except, except, except, we have gone so far down a very slippery slope we need a Black and Blue two-tone flag to express who we have become. Half black, half blue with red spatter across the entire banner is whom we are, bruises, broken bones and fresh blood spilled.

Remember when Ronnie Reagan was having conniptions over the Soviets using well-water poisons to kill Afghan people? Those Russian killer demons are not human. 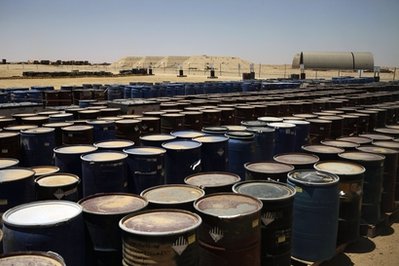 Depleted Uranium as a means of cruel and unusual punishment, cruel and unusual execution, cruel and unusual maiming one member of “the enemy” in a manner where 4-5 members of the enemy need to attend to their atomically inflicted wounds. If someone made our troops swallow lead and cadmium tablets as torture, we would be crying foul, Geneva Convention.

Anyone can see it is how we leave an occupying army of atomic “tin” soldiers, killing generation after generation of “our adversaries”.

This is cruel and unusual punishment, cruel and unusual torture, and cruel and unusual murder. Slow painful illness, chronic bad health, and birth defect and slow lingering death upon you and your family based on your being an ethnic other with a government unfriendly to McDonalds. How do the Magna Carta and Eighth Amendment fit in with Depleted Uranium toxic waste dumped abroad via politics?

The last four Presidents made me ashamed to be an American. All four engaged in cruel and unusual punishment. Firing squad by Alpha and Gamma radiation, slowly cancering people whose biggest crime was being Muslim. We are the Turks. We are the Soviets. We are now everything we used to say we were fighting against. George H.W. Bush, Clinton, George W. Bush and Obama” go to sleep tonight and dream of mutating red blood cells, babies born with two heads.