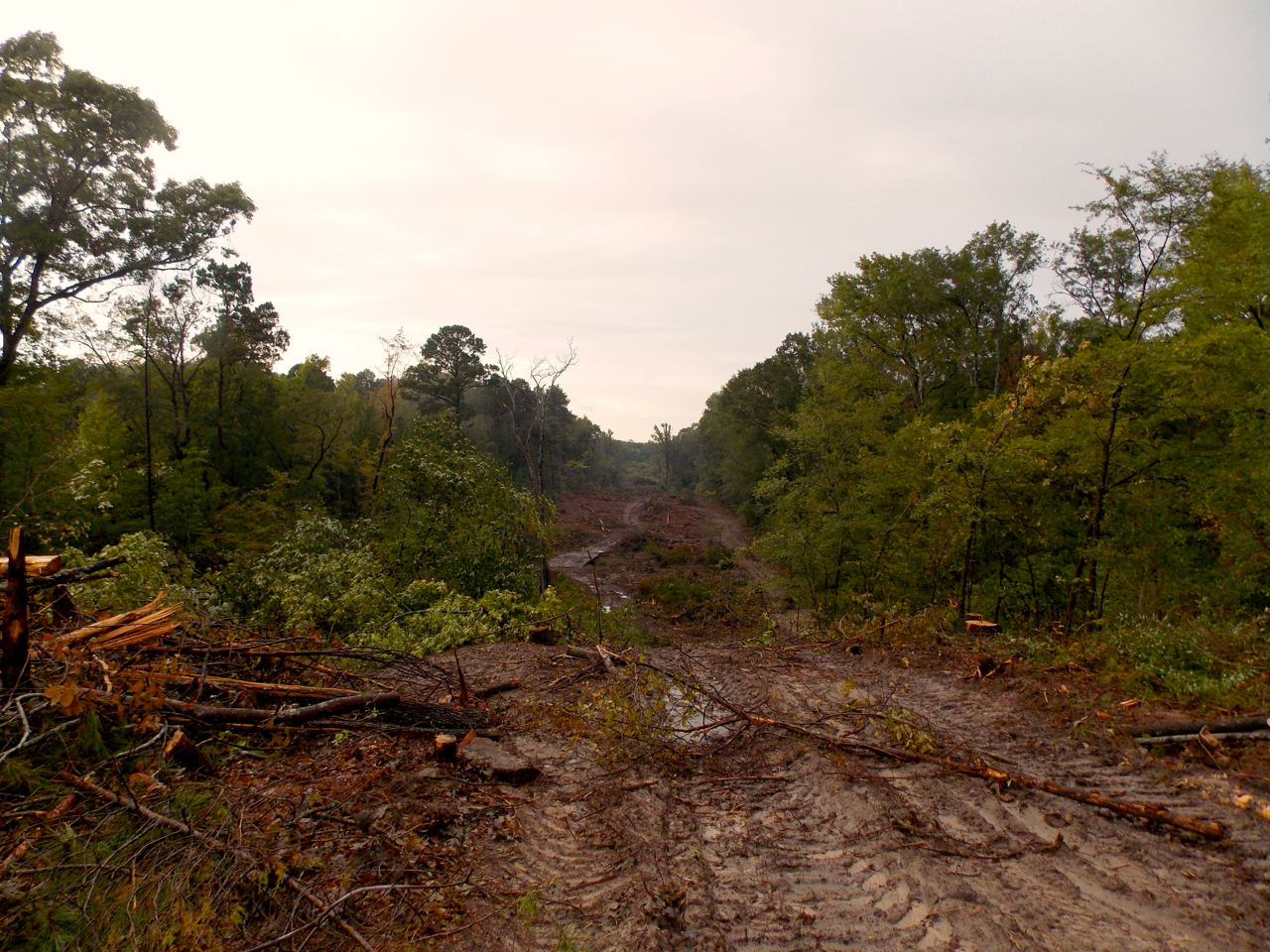 I’m writing to ya’ll from a safe space nearby the Tar Sands Blockade in rural east Texas.  Early this week, heeding the call of friends and comrades already on site, we assembled a crew of Earth First!ers from the Northeast US and made the 30+ hour drive to the site to provide crucial reinforcement.  The tree village set up on site is one of the most fantastic things we’ve ever seen, and the emerging pictures on the internet do it no justice. Down below the pods, hideous monsters in the form of massive feller bunchers and dozers fill the air with the heinous sounds of corporate ecocide: mechanical whirs, sawing, and worst of the all the sound of beautiful trees hundreds of years old falling to their death, driving wildlife from their homes.

Yesterday a feller buncher began clearing through a section of the forest, rapidly advancing towards one of the tree sitters. Clearly printed in large letters on the side of the death machine read a warning to stay back at least 500 feet. A roving team on the ground that I was part of began cat-and-mousing the feller buncher, trying to keep our comrade in the tree safe. On the ground two TransCanada workers and one local sheriff operating as an armed mercenary of the corporation oversaw the operations, trying to move through the felled trees to push back our crew from the clear cut site. We continued to advance, determined not only to protect our comrade above in the canopy but to push them back and show them that we are not scared and that we will resist.

At one point as we had just watched the feller buncher take down an 80 foot water oak not 40 feet away from the sitter and we heard our friend screaming from above pleading for the safety of their life, I ran towards the machine about 25 feet away making eye contact with the driver who continued to operate the machine and yelling to TransCanada and their bought and paid sheriff that we would not stay back, that they were going to kill our friend if they continued to advance and they were required by law to stop the machine.  The sheriff approached saying that “they” (speaking as if they were actually part of TC) weren’t coming any further at that point and they turned the machine around to continue clear cutting.  A crew of 7 of us held our ground and remained in defense of the sitter on the opposite side of a creek where we were forced to watch tree after tree fall. A dense part of the forest was instantly turned in to a morose tree morgue.

Overcome with emotions, having never seen a clearcut myself and certainly having never faced down a massive feller buncher, I moved back through the clearcut, across the creek where our friend sat above us in a tree.  Feeling the energy coming from the mercilessly mauled fresh tree stumps, I lay over a large one crying uncontrollably as I watched the remaining few trees off in the distance be cut and wrestled out of place. I angrily contemplated the enormity of the corporate state, the cancer that is capitalism, and the injustice of the entire situation. Comrades were there to comfort me and together we all walked away from the horrible scene feeling renewed in our fight and certain in our decision to come to Texas to fight this madness and call attention to this scene.

As I write this now I’m receiving word from the site that they’re cutting in from the south side, only 20 feet away from the sitter we spent yesterday protecting.  North from there at the wall that y’all have seen photos of earlier this week, several of our friends’ lives are at risk and trees are being cut dangerously close. TC is now clearing from the west side of the site, attempting to box our site in and presumably make way for cherry pickers and other extraction devices.

One of the locals who is currently resisting the Keystone XL pipeline in solidarity with several local landowners shared stories with a few of us.  It is absolutely clear that TransCanada is paying off local law enforcement officers.  In addition TC is relentlessly trying to serve people with lawsuits, putting gag orders on landowners who had previously been strong allies, and buying off others.  Yesterday one of our key allies awoke to TC in their yard with a big feller buncher.  TC had promised them multiple times both verbally and in formally written depositions that they would give “fair” notice before beginning to destroy their land.  It seems like TC knew that this area is quickly receiving an influx of resisters and gave this landowner no warning, knowing that we’d have certainly acted at that site.

Despite the situation we are keeping spirits high.  Last night I came out of the woods with three comrades to head to a safe space to write this communique to y’all.  We were excited to find that many new friends and many familiar faces had arrived to reinforce the site.  We’re here for the long haul and are asking y’all to come down to help defend our friends in the trees and stand up to TransCanada and their dirty pipeline.  What we’re doing is not enough, but there is strength in numbers and with the aid of more friends we can turn up the heat on TC.  There are many opportunities to plug in in various ways here and the pipeline is going in all across this region.  There are many allies and a supportive campaign.  We sit here anxiously waiting to re-join our comrades and worried for their safety, and eager to return to the woods and keep up the fight.  We hope to see you in the woods.

In Solidarity & For the Wild,

UPDATE: TSB is having an ACTION CAMP Oct 12-14 in the East Texas Woods! Email TSB for more info.