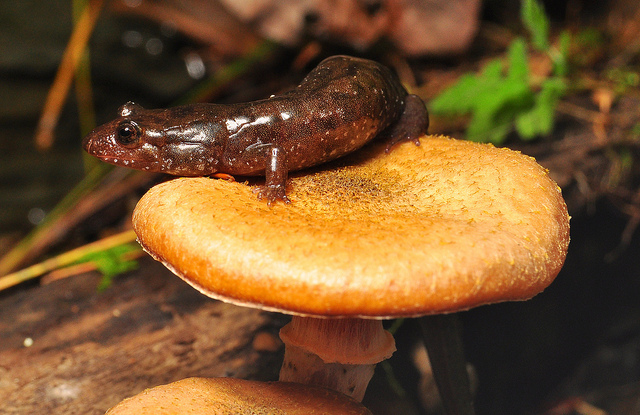 When you think of mountaintop removal coal mining, you probably don’t think of salamanders.

But you should — because when coal companies use the cheapest and most destructive methods to blow off the top of an Appalachian mountain to extract the coal buried inside, guess which animals make up the single largest group that’s destroyed in the process?

Yep, salamanders. The Appalachian Mountains, where 2.5 million pounds of explosives are detonated daily for surface mining, are home to more kinds of salamanders than anywhere else on Earth. By weight, there are more salamanders in the forest than birds and mammals combined.

And when you suddenly decimate the largest component of a food chain, it’s bad news for the health of all kinds of animals for lots of years, maybe forever.

As a kid growing up in the Appalachian hills of Kentucky, I watched the coal companies strip bare the mountains around my home. It ruined our well water, cracked our windows and covered our daily lives in a blanket of dust. Turns out what’s bad for salamanders is also bad for people.

We’d be wise not to ignore the plight of salamanders. Because they breathe through their skin and absorb the pollution around them, amphibians have long been considered an important early warning sign of the broader health of the environment. As frogs and salamanders go, so could the rest of us.

If pollution from mining decreases water quality, for example, it can cause the loss of entire populations of salamanders. But that’s only the beginning of the destructive cycle that ripples throughout the food chain, including, in the case of highly mechanized mountaintop removal, pollution linked to cancer and birth defects in nearby human communities, and the crippling economic impacts of thousands of lost mining jobs.

Whether we like it or not, our amphibian and reptile friends offer us a forbidding glimpse of our own future. And right now, things don’t look so bright. Although amphibians have been around for hundreds of millions of years and survived every major extinction period, now, due largely to human impacts, they’re dying off at more than 1,000 times the historic extinction rate.

Overall, scientists estimate that 25 percent of the nation’s reptiles and amphibians are in danger of extinction, yet they make up only 5 percent of the approximately 1,400 species on the endangered species list.

That’s why I was compelled to be one of three biologists at the Center for Biological Diversity who just submitted the largest petition ever filed targeting the protection of amphibians and reptiles. We’re seeking Endangered Species Act protection for 53 amphibians and reptiles, from lizards with specially adapted toes that help them run without sinking on desert sands, to green salamanders, whose lichen-like, splotchy markings make them almost impossible to spot as they sit like sentinels in the Appalachian Mountains on the lip of rock crevices they may not leave their entire lives.

For many of these species, time is running out. More than a million acres of forest in Appalachia and more than 2,000 miles of streams have already been destroyed. Nearly 25 percent of the total area of some West Virginia and Kentucky counties has been permitted for surface mining.

The good news is the Endangered Species Act works — a remarkable 99 percent of species placed under its protection have been prevented from going extinct. It’s worth protecting these frogs, turtles and, yes, salamanders. Because, in the end, protecting them will mean protecting us all.