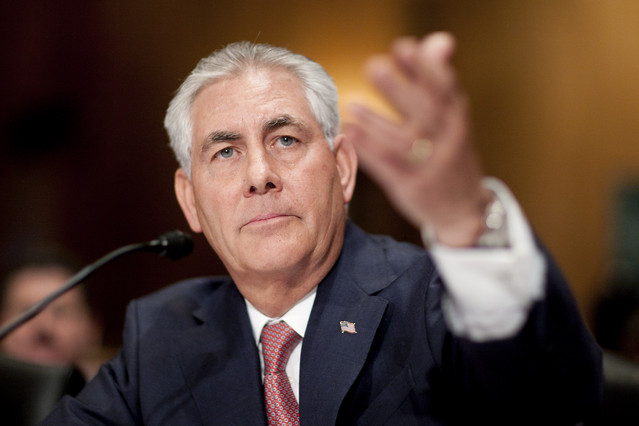 In a speech Wednesday, Tillerson acknowledged that burning of fossil fuels is warming the planet, but said society will be able to adapt. The risks of oil and gas drilling are well understood and can be mitigated, he said. And dependence on other nations for oil is not a concern as long as access to supply is certain, he said.

Tillerson blamed a public that is “illiterate” in science and math, a “lazy” press, and advocacy groups that “manufacture fear” for energy misconceptions in a speech at the Council on Foreign Relations.

He highlighted that huge discoveries of oil and gas in North America have reversed a 20-year decline in U.S. oil production in recent years. He also trumpeted the global oil industry’s ability to deliver fuels during a two-year period of dramatic uncertainty in the Middle East, the world’s most important oil and gas-producing region.

“No one, anywhere, any place in the world has not been able to get crude oil to fuel their economies,” he said.

In his speech and during a question-and-answer session after, he addressed three major energy issues: Climate change, oil and gas drilling pollution, and energy dependence.

Tillerson, in a break with predecessor Lee Raymond, has acknowledged that global temperatures are rising. “Clearly there is going to be an impact,” he said Wednesday.

But he questioned the ability of climate models to predict the magnitude of the impact. He said that people would be able to adapt to rising sea levels and changing climates that may force agricultural production to shift.

Andrew Weaver, chairman of climate modeling and analysis at the University of Victoria in Canada, disagreed with Tillerson’s characterization of climate modeling. He said modeling can give a very good sense of the type of climate changes that are likely. And he said adapting to those changes will be much more difficult and disruptive than Tillerson seems to be acknowledging.

Steve Coll, author of the recent book “Private Empire: ExxonMobil and American Power,” said he was surprised Exxon would already be talking about ways society could adapt to climate change when there is still time to try to avoid its worst effects. Also, he said, research suggests that adapting to climate change could be far more expensive than reducing emissions now. “Moving entire cities would be very expensive,” he said.

Legislation or regulation that would help slow the emissions of global warming gases would likely lead to lower demand for oil and gasoline, and could reduce Exxon’s profit.

Tillerson expressed frustration at the level of public concern over new drilling techniques that tap natural gas and oil in shale formations under several states. He said environmental advocacy groups that “manufacture fear” have alarmed a public that doesn’t understand drilling practices — or math, science or engineering in general. He blamed “lazy” journalists for producing stories that scare the public but don’t investigate the claims of advocacy groups.

Drilling for oil and gas will always involve risks of spills and accidents, he said. But those risks are manageable and worth taking because they are small given the amount of energy they produce.

Drilling in shale formations, he said, only poses a small risk to those living nearby. It is neither life threatening nor long lasting and can be controlled in the event of an accident.

Drillers force millions of gallons of water mixed with sand and some hazardous chemicals into shale formations. The technique breaks up rock and creates escape routes for oil and gas. If the drilling wastewater is not treated properly or if it seeps through cracked drilling pipes, it could contaminate drinking water.

The industry’s biggest challenge, he said, is “taking an illiterate public and try to help them understand why we can manage these risks.”

Tillerson made a distinction between energy security and energy dependence. He said that energy security — making sure that the economy has access to energy — is crucial.

But he said access to energy is not in peril. “Some of the fears around energy security are not well founded,” he said.

The quest for energy independence, though, is misguided, he said. It doesn’t matter where the U.S. gets oil because crude is priced globally. Even if the U.S. used only oil from North America, a disruption in the Middle East would increase global prices, hurt the U.S. and global economies, and force Americans to pay more at the pump.

Even if the U.S. no longer needed Middle Eastern oil, it would likely want to play a major role in helping maintain the region’s security, Tillerson said.

AP writers Seth Borenstein and Dina Cappiello contributed to this story from Washington. Jonathan Fahey can be reached at http://twitter.com/JonathanFahey.