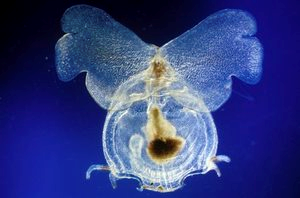 Pteropods, or sea butterflies, are tiny, free-swimming marine snails which have developed two wing-like flaps in place of the large muscular foot of most snails. They beat these ‘wings’ constantly to remain near the surface of the ocean.

You may have heard the news that atmospheric concentrations of carbon dioxide have pushed past 400 parts per million at monitoring stations in the Arctic.

Carbon dioxide is a heat-trapping gas, in fact the most pervasive greenhouse gas contributing to climate change, and scientists are noting this signpost with concern as it indicates that the effects of increased CO2 and climate change – soaring pollution and temperatures, melting sea ice and glaciers, and rising sea levels – will continue unabated for the foreseeable future. What you may not have heard is what this milestone means for our oceans and marine life.

Ocean acidification is the lesser known consequence of greenhouse gas pollution. Every day we release millions of tons of CO2 into the atmosphere, and a significant portion is absorbed by our oceans. The oceans’ regulation of our climate via absorption is a natural process, but the amount of CO2 our oceans are now absorbing is unprecedented and is causing our oceans to become more acidic.

Ocean acidification science is complex and evolving; put simply, as the oceans absorb CO2 pollution, the dissolved CO2 changes seawater chemistry, making it more acidic. The dissolved CO2 also results in a decrease in carbonate ions which are the necessary building blocks for the shells and skeletons of countless marine species, such as corals, mollusks, echinoderms, and crustaceans.

As oceans become more acidic, it becomes more difficult for these species to produce and maintain these structures.

Our coral reefs and the marine life they support stand to lose the most in increasingly corrosive oceans. Over 90 percent of the Earth’s biodiversity lives in our oceans, and coral reefs provide the necessary food and shelter for much of it. Not only are coral reefs biodiversity hotspots, they provide other services such as shoreline protection and fisheries habitats. The threat of increasing ocean acidification compounds the relentless impacts of over-fishing and pollution, which continue to diminish ocean biodiversity.

Therefore, reducing the amount of CO2 in the atmosphere is important not only for curbing climate change, but also for ensuring healthy oceans.

Jaclyn Lopez is a staff attorney for the Center for Biological Diversity.