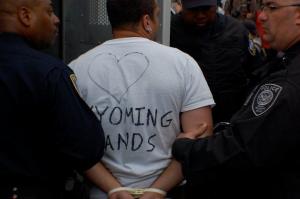 This summer, climate activists from all over will be headed to the heart of Wyoming’s coalfields to raise awareness about the impacts of the life cycle of coal (mining, exports, burning). West By Northwest, a No Coal Exports Action Camp will be convened by High Country Rising Tide, Rising Tide North America and host of other environmental and community organizations.

Want to get involved? Here’s a couple of ways:

On August 2-10, hundreds of people from a broad coalition of workers, seniors, ranchers, students, local residents, environmentalists, and more – will converge in in Wyoming’s Powder River Basin at West By Northwest, a No Coal Exports Action Camp, to build constructive solutions to preventable human and environmental catastrophes related to coal exports.

West By Northwest will raise awareness about:

WHAT: West By Northwest will hold workshops on extraction and coal export related topics, organizing skills and participate in local community projects.

WHERE: In Wyoming’s Powder River Basin, near Gillette, WY.

WHEN: August 2nd through August 10th

INFO: For more information on the camp, please visit www.highcountry.risingtidenorthamerica.org.

For more information on the Coal Exports Action in Helena, please visit www.coalexportsaction.org