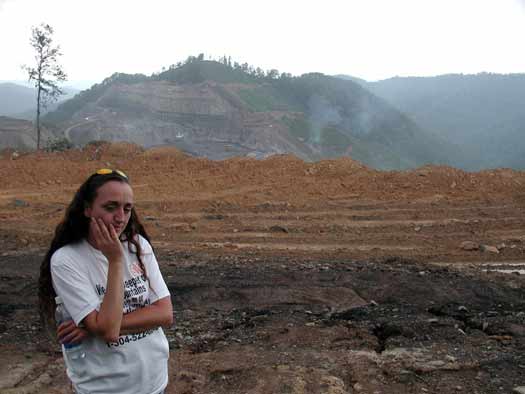 Last week, famous and furious MTR activist Maria Gunnoe traveled to D.C. to speak before the House Subcommittee on Energy and Mineral Resources on mountaintop removal mining. The hearing was a sham, set up as an occasion for lawmakers to bash the EPA.
But Gunnoe’s trip to Washington took a surreal turn when, just after she finished testifying, she was hauled off by U.S. Capitol Police and accused of possession of child pornography. The photo in question, included in a slide show presentation Gunnoe had prepared for the committee: a five-year-old Kentucky girl taking a bath in orange water – water polluted by arsenic and other heavy metals caused by run-off from mountaintop removal mines.

This is “End Mountaintop Removal Week Washington DC,” an attempt by activists to draw attention to the rape and pillage of Appalachia by Big Coal. Yesterday, 22 activists were arrested during a sit-in at congressional offices; hundreds of others called their state representatives. Earthjustice, a non-profit environmental law firm, launched a powerful new campaign celebrating “Mountain Heroes” who are fighting Big Coal. The point of it all: to push Congress to pass the Clean Water Protection Act (HR 1375), which would effectively stop mountaintop removal mining.

Good luck with that – at least in this Congress. Mountaintop removal activists cling to the belief that we still have a functioning democracy in America, and that members of Congress can be convinced that the people and mountains of Appalachia are more important than political campaign contributions from Big Coal. It is a brave and courageous and inspiring dream, and one that, in a better world, every American would share. After all, mountaintop removal mining is forever destroying huge swaths of southern Appalachia, decimating some of the most biodiverse mountains in the world, burying streams and polluting drinking water, and, worst of all, trapping the people of Appalachia in a brutal economic tailspin that profits Big Coal and leaves sickness, poverty, and despair for everyone else.

It is also a dream these activists pursue at great personal risk. Consider what happened last week to Maria Gunnoe, one of the most effective and celebrated mountaintop removal activists in Appalachia.

Gunnoe is one of the toughest people I’ve ever hung out with. The first time I met her, back in 2001, she gave me a tour of her home in Boone County, West Virginia, which had recently been devastated by floods caused by run-off from a mountaintop removal mine above her home. Then she tucked a silver .32 caliber pistol under her belt and took me on a hike up through blasted rubble into the mine. Protection from bears? “Or angry coal miners,” she told me.

Gunnoe knows how rough things can get in the coalfields. I’ve been with her when she stared down a six-foot-tall miner at a gas station who clearly wanted to hurt her. Coal trucks have tried to force her car off the road, her brake lines have been slashed, and her family dog, a Rottweiler named Chaos, wound up dead at her son’s bus stop, shot in the chest – a clear warning to back off.

But Gunnoe, 44, who is part Cherokee and whose roots in West Virginia go as deep as any oak tree, has not backed off. She speaks around the country about the devastation being wrought by mountaintop removal mining in the coal country of Appalachia – a place most Americans care little about. She is blunt, authoritative, and, with her long dark hair, telegenic. The media loves her (the fact that her brother and her son both work in deep mines only adds to her credibility). Big Coal hates her, of course. In 2009, Gunnoe won the Goldman Prize – the so-called “Green Nobel” – for giving voice to the people of Appalachia against the coal industry.

Last week, Gunnoe traveled to Washington DC to testify before the

Sadly, it’s the same toxic water that people in Appalachia who live around coal mines drink all too often– and one of the reasons why cancer and birth defect rates are so high in parts of southern Appalachia. As a visual image of the suffering that coal mining brings to the people of Appalachia, the photo is devastatingly powerful.

You went to Washington to testify before Congress on the impacts of mountaintop removal mining – and you ended up getting accused of possessing child pornography. How did that feel?

I was flabbergasted. I couldn’t even speak. It was one of the only times in my life I’ve been speechless.

I had prepared written testimony, as well as a slide show, for the hearing. I did not include the photo of the little girl in the bathtub in the slide show because I did not have permission from the girl’s parents when I had completed the slide show. But then at 7:30 on the morning of my testimony, I got permission from the parents to use the photo. I sent it on to the committee and asked them to display it for the five minutes that I was speaking – just this one shot, this one photo.

Then just before the hearing, a couple of staff members, including one who worked for Rep. Doug Lamborn [the Colorado Republican who chairs the committee], told me they were not going to show the photo because they felt it was “inappropriate.” I debated with them a little bit, told them that thousands of people had seen this photograph with innocent eyes and didn’t see anything inappropriate about it. Then I just let it go. I knew that the fact that they censored it would make people want to see it.

But right after I testified, a special agent with the U.S. Capitol Police grabbed me by the arm and marched me into the back room. He told me that the committee had reported the photograph to him as child pornography, and that he had an obligation to investigate it. I told him this picture had been in circulation for three years – that thousands of people had seen it. He asked me my name, where I was from, what kind of work I had done. He also asked me the name of the parents of the child in the photo, and the name of the photographer. The questioning lasted about 45 minutes, then they let me go.

I do. Somebody on the subcommittee clearly called the Capitol Police and told them I was carrying child pornography.

Why did you want to show that photo?

Because it had a big impact on me. Ever since I saw it, I could not get it out of my head. I wanted to use a strong photo that congress wouldn’t be able to erase from their mind – and that was it. It really expresses what we’ve been put through here. That little girl sitting in that polluted water is a U.S. citizen, and so is [everyone in] her family. What I find so compelling is that it shows our options here: We bathe our children in water like that, or our children don’t bathe. I mean, this hearing was staged as an attack on the EPA and the Obama administration for trying to enforce laws to protect clean water. If the EPA can’t protect the water for the people in southern Appalachia, then who will?

What was the point of your testimony?

That people in Appalachia are dying because of polluted water and polluted air. Mountaintop removal mining is killing people. There are 19 peer-reviewed health studies out now that prove that, beyond a shadow of a doubt. And according to recent polls, 86 percent of people of West Virginia strongly oppose mountaintop removal mining. But most of the representatives in congress, and most of the politicians in West Virginia, support it.

Democracy doesn’t count for much in West Virginia.

It doesn’t, because the coal industry runs this state. My forefathers fought for the democracy that I’m supposed to be living in right now. But we still don’t have it, and I’m still fighting.

Did you think this was an attempt to intimidate you?

Yes, it absolutely was. It was an act of desperation, and it showed these congressmen’s true colors. They would have done anything to stop that photo from being displayed during this hearing. I think that was the goal. They didn’t have anything else in mind other than stopping that photograph from being seen. And it wasn’t because the little girl didn’t have a shirt on. It was because she was bathing in mine waste.

I know this is not the first time coal supporters have tried to intimidate you.

Oh the industry guys come after me all the time. A few years ago, myself and Vivan Stockman [an organizer with the Ohio Valley Environmental Coalition had asked a judge for a temporary restraining order on an illegal mining permit. During a meeting at a community building here in Boone county, about 60 strip miners blasted into the building, pushed people around. One gentleman pushed me three times. The third time, he pushed me over the top of my daughter – and that made me mad. I got back on my feet and pushed him back. He weighed 250 pounds – and because I pushed him, he decided to file charges against me for battery. I fought those charges for a year. He got on the stand – a 250 pound man! – and swore that I hurt him. Of course, the jury found me not guilty. It was self-defense. But it cost me a lot of time and money to clear my name.

As you said in your testimony, Big Coal has been hyping the Obama administration’s so-called “War on Coal.” Is accusing you of being a child pornographer part of that?

I don’t know. But I do think folks are starting to see that the coal industry and their supporting politicians are – well, dishonest. And I think there are members of congress that get the same kind of intimidation as I got the other day. If they stand up and speak out against coal, they know they will be attacked.

Do you think the EPA is doing a good job enforcing laws to rein in mountaintop removal mining?

They’ve come a long way since the Bush years. But they haven’t done enough, because mountaintop removal mining is still going on. I’m fighting local permits right here, right now. In fact, coal companies have sped up – they’re racing to get the coal out of the ground right now. So we’re seeing more destruction now than we did before the EPA started enforcing the laws. The coal companies have this idea that they need to get to this coal while they can – there’s more disrespect for the land, water, air, and people than there has ever been. They are desperate. Desperate people will do anything.

What effect did this whole fiasco have on you? Did it scare you?

No, it’s made me angry. I know I have to stand up and defend not only my name, but my character. I work with many children throughout southern Appalachia, and I’m not going to let this be defined as anything but what it is – obscene. This whole thing is obscene. What’s most obscene is the idea of a little girl bathing in poisoned water. But that’s what’s happening in southern Appalachia, and people need to know about it. And we need to stop it.