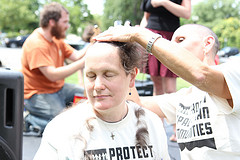 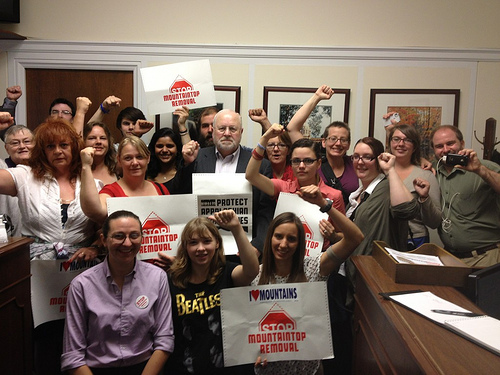 [UPDATE: 22 arrested in sit-ins. For updates, photos, videos and details on how to support them, visit Appalachia Rising]

“After seven years of going in circles, asking just for basic protections for our people and being blocked by our own Representatives who are supposed to be passing legislation to protect our district, we don’t see any other way. Appalachia deserves better,” said Teri Blanton of Hal Roger’s district in Eastern Kentucky.

The asks of the protesters include passage of the Clean Water Protection Act (HR 1375), which would create permanent protections for streams, as well as enforcement of Clean Water laws and a moratorium on mountaintop removal and destructive coal technologies.

With twenty-one recent peer reviewed studies highlighting the extreme health impacts of mountaintop removal coal mining, citizens from Appalachia are demanding that Congress protect their communities. According to Gallup’s physical well-being index, these districts have the highest rates of sickness in the United States. In addition, districts with mountaintop removal face some of the highest poverty rates in the United States, with 37.3 percent of the children in Hal Roger’s district (KY-05) living below the poverty line.

“Representative Rahall is not taking these studies or our health seriously. If they could actually see these waters, see what’s been done to our homes, see the children that are sick and the people that are dying, then maybe they’d be willing to do something about it,” said Donna Branham of Mingo County, West Virginia.

“I have been trying since 2009 just to talk to Representative Hal Rogers about the horrors of mountaintop removal. I’ve sent him letters, and tried to get meetings with him,” said Stanley Sturgill, a retired underground coal miner from Lynch, Ky. “I’m here for my health, to try to keep what little bit I have left. I’m here for my family, my children, and my grandchildren to try to keep a decent place for them to live. They deserve that and we’re not getting that with the things happening in the mountains.”

“It’s my belief that I have to be ready to go to any length to bring out the change that is required. If arrest is part of that, I’m willing to do that. A lot of people are going through a lot worse trials and tribulations because of mountaintop removal than spending a little time in jail,” said Patrick Morales of Tennessee. “I want Representative Duncan of Tennessee to examine his conscience honestly, and come up with some moral justification for his support of mountaintop removal and share that with me.”

“I told Congressman Duncan that he should know better than to get between a mother and the safety and health of her children. I am so frustrated that Congress allows coal companies to destroy our mountains and our health. I would do anything to protect the health of my children and grandchildren,” said Vickie Terry of Tennessee.

Mountaintop removal coal mining relies on heavy explosives to blast off several hundred feet of mountain to expose coal seams, and has impacted over 500 mountains in West Virginia, Virginia, Kentucky and Tennessee to date. According to the EPA, the practice has also buried or destroyed more than 2,000 miles of streams in those states.

“We have no choice,” said Jane Branham of Virginia. “My health is failing; we have some very elderly people with us today. It is very hard for us to come all this way. But we are here, fighting for our very survival.”