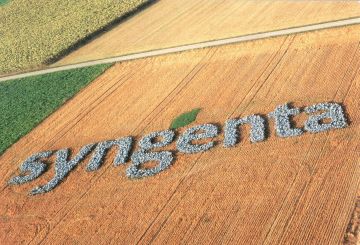 Last month Swiss chemicals maker Syngenta agreed to pay $105 million to settle a nearly 8-year-old lawsuit over its popular agricultural herbicides.  According to the paintiffs’ attorneys the money could help reimburse nearly 2,000 community water systems that have had to filter the chemical from its drinking water.

As part of the deal, some 1,887 community water systems serving more than 52 million Americans may be eligible to make a claim, said Stephen Tillery, the St. Louis attorney behind the class-action lawsuit.

Syngenta said it agreed to settle the matter “to end the business uncertainty” and avoid further legal costs. Under the settlement, the company will continue to sell atrazine to U.S. corn growers and denies any liability linked to the chemical, which Syngenta said is used in more than 60 countries and has been marketed in the U.S. since 1959. 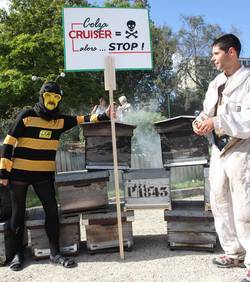 Following research linking neonicotinoid pesticides to the decline in bee populations, France has announced it plans to ban Cruiser OSR, an insecticide produced by Sygenta. Recent studies, including one in France, have shown that neonicotinoid pesticides likely hurt bees’ ability to navigate, potentially devastating hives. France has said it will give Sygenta two weeks to prove the pesticide is not linked to the bee decline, known as Colony Collapse Disorder (CCD).

France’s decision comes after its National Agency for Food, Safety, and the Environment (ANSES) confirmed the findings of two recent studies published in Science. The two studies found that neonicotinoid pesticides, although not immediately lethal, likely hurt bee colonies over a period of time.

In the French study, researchers glued tiny microchips to free-ranging honeybees and then administered small doses of thiamethoxam, a primary ingredient in Sygenta’s Cruiser OSR to some of the bees. Bees exposed to the pesticide were two to three times more likely not to return from foraging trips, allowing researchers to hypothesize that the pesticide impairs the bee’s ability to navigate its surroundings successfully.

Because neonicotinoid pesticides work by impacting insects’ central nervous systems, they have long been a target for researchers trying to understand Colony Collapse Disorder, but the difficulty has been proving that pesticides harm hives even though they don’t kill bees outright.

However, Sygenta denies that their pesticides have played any role whatsoever in the bee collapse.

“All Syngenta’s crop protection products are thoroughly tested to ensure that there are no unwanted effects on beneficial insects such as bees or excessive residues in food or risks to human health,” the company says on its website.

The French government disagrees and has stated it would also raise the question of a ban on the pesticide for the entire European Union (UN).

Evidence of harm piling up

Despite Sygenta’s statements, studies continue to appear that find a link between neonicotinoid pesticides and Colony Collapse Disorder. Recently, researchers in the U.S. fed tiny doses of neonicotinoid pesticide-laced high-fructose corn syrup, which is commonly used to feed bees, to 16 hives in the field and left four hives untreated. For months all the hives remained healthy, but after around six months over 90 percent (15 out of 16) of the hives fed with the pesticidal corn syrup had collapsed, while the four control hives remained healthy.

“There is no question that neonicotinoids put a huge stress on the survival of honey bees in the environment,” lead author Chensheng (Alex) Lu, an associate professor at the HSPH, told mongabay.com.

Foraging bees communicate via ‘waggle dances’ whereby they show the hive where to find food sources. But says lead author Daren Eiri, “Remarkably, bees that fed on the pesticide reduced the number of their waggle dances between fourfold and tenfold. And in some cases, the affected bees stopped dancing completely.”

Scientists first started recording alarming declines in bees in North America in 2006. Shortly thereafter similar declines occurred throughout Europe, and have also been noted in Taiwan. While periodic colony collapses have been recorded since the 19th Century, the current crisis has proven much worst than past ones with some producers losing 90 percent of their hives. A number of theories for the collapse have been posited, including disease, parasitic mites, habitat loss, and, of course, pesticides. Many researchers have suggested a combination of these factors.