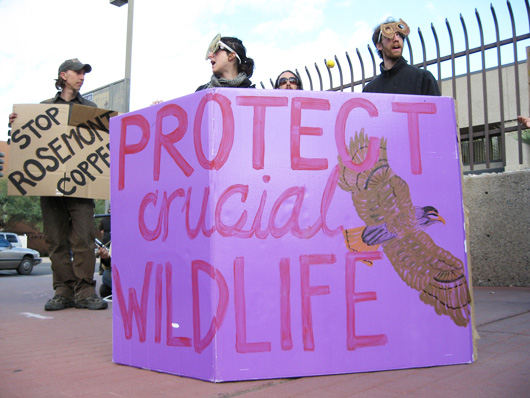 A 2007 protest against Rosemont Copper in Tucson, Arizona

The Arizona Corporation Commission gave Rosemont Copper a boost Wednesday by unanimously granting final approval of a power line for its proposed mine.

But as part of a compromise, the approval carried restrictions that will delay construction of the 13-mile line into the Santa Rita Mountains until the mining company can obtain five other government permits, approvals, certifications and a land transfer.

That’s four more additional government approvals than were originally required for this power line last December by the Arizona Power Plant and Transmission Line Siting committee. Since no one can say exactly when the other approvals will be granted, it’s impossible to say right now when the power line would be built or even if it ever will.

Still, the commission’s vote for a Certificate of Environmental Compatibility was welcome news for the mining company, coming after a bruising debate that had lasted six months and at one point drew a host of business leaders and Tucson-area Republican legislators into the fray.

The latest vote, while adding new conditions for the power line, also means the commission won’t consider additional evidence about the line’s impacts – for which opponents had previously pushed very hard and at times successfully.

The vote followed nearly two hours of closed-door negotiations Wednesday among Rosemont Copper and Tucson Electric Power Co. officials and attorneys, intervenors and other representatives of mine and power line opponents that produced most of the elements of the compromise.

Late Wednesday afternoon, the commission went into private executive session for about an hour, and emerged with what amounted to a blueprint for the power line’s final approval.

“We were very pleased that the commission put all these disparate interests together so they could support a 5-0 vote,” said Kathy Arnold, Rosemont Copper’s vice president for environmental and regulatory affairs. “It will give finality to the process so we won’t get back here. Any kind of finality is good.”

“Operationally, it doesn’t change a lot for us,” added Barrios, although the utility does face additional requirements before it can build.

The deal gave Larry Robertson, an attorney for a mine opposition coalition, some of what he wanted. The environmental coalition, including the group Save the Scenic Santa Ritas, had wanted the commission to consider evidence about the overall impacts of the Rosemont Mine in its consideration of the power line. But the commission’s vote in March to consider such impacts triggered a huge outcry from business leaders and four Republican legislators from Tucson who said it would unduly delay the power line and set a bad precedent for future lines.

On Wednesday, Robertson said a key reason he endorsed the compromise was that had the commission voted it down, the next measure that it was scheduled to vote on would have approved the line without considering mine impacts or requiring most of the other permit approvals.

Another party who had opposed the power line construction, Vail activist Elizabeth Webb, was ambivalent about the compromise, saying, “I clearly believe that it’s a bad” outcome, “but I thought it was the best I could get under the circumstances.”

Other new conditions put onto the power line include:

• A requirement that the utility have a monitor at the power line construction site employed or commissioned by the Tohono O’odham Nation to ensure that the contractors minimize damage to cultural sites along the power line route.

• The utility and Rosemont Copper have seven years to build the power line – down from 10 years as approved by the line siting committee.

• The utility must submit proof that if the power line is built and the mine is later canceled, all costs for removing the line and remediating its environmental effects will be covered by Rosemont Copper or its successors if Rosemont ever pulls out of the project.

• A statement that the commission values the public’s intervention and participation in the line siting process, and appreciates contributions made by Webb and by Tubac resident Marshall Magruder, another intervenor.

Democratic commissioner Paul Newman, who had pushed hard for many of these conditions, told the commission he felt that critics of the line “advanced this issue from an environmental standpoint, a public interest standpoint, a transparency standpoint, and we’ve also opened the doors for intervenors to come in in the future.”

Stump said the process to shape Wednesday’s compromise may have resembled sausage-making at times, “but I think we made fine sausage this time.”

Additional approvals needed for construction of the Rosemont Mine power line:

• The U.S. Army Corps of Engineers must approve a Clean Water Act permit for the mining company to place fill material into washes – a permit over which the Environmental Protection Agency has claimed a veto power.

• An air quality permit must be approved for the mine.

• The State Land Department, which owns the power line’s right of way, must transfer that right of way to Tucson Electric Power.

“We were very pleased that the commission put all these disparate interests together so they could support a 5-0 vote. It will give finality to the process so we won’t get back here. Any kind of finality is good.”