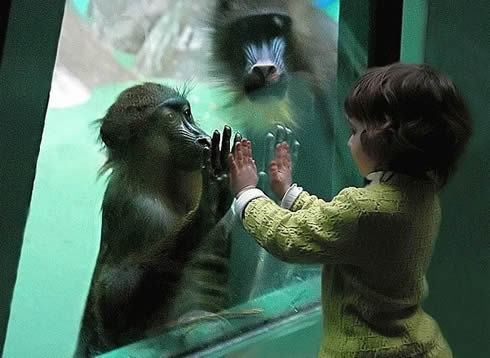 If anyone requires proof that dark green ethics and radical earth defense are becoming more and more widespread, consider how the all-purpose smear of “terrorist” is being increasingly used by governments and private groups to criminalize eco-dissent.

Mic Check: So, what exactly is a terrorist?

By current standards, you can pack a calf into veal crate or pump food down a goose’s gullet or grind up live male chicks to fertilize your fields—and you’d run no risk of being called a terrorist.

You could also clear-cut forests to make way for doomed livestock or blow off mountain tops in search of coal or pump toxin-filled smoke into the atmosphere and you’d garner virtually no attention at all—let alone be labeled a terrorist.

But if you choose a lifestyle based on compassion and logic or speak out against vivisection or protest use of fur? Well, thanks to the Green Scare, you deserve an orange jumpsuit and a one-way ticket to Gitmo.

Green Scare refers to “the federal government’s expanding prosecution efforts against animal liberation and ecological activists, drawing parallels to the ‘Red Scares’ of the 1910′s and 1950s.”

This term was first known to have appeared in 2002 in the wake of congressional hearings titled “The Threat of Eco-Terrorism” which discussed groups including the Earth Liberation Front (ELF) and the Animal Liberation Front (ALF).

“The animal rights and environmental movements, like every other social movement throughout history, have both legal and illegal elements. There are people who leaflet, write letters, and lobby. There are people who protest and engage in non-violent civil disobedience. And there are people, like the Animal Liberation Front and Earth Liberation Front, who go out at night with black masks and break windows, burn SUVs, and release animals from fur farms. Animal rights and environmental advocates have not flown planes into buildings, taken hostages, or sent Anthrax through the mail. Yet the FBI ranks them as the top domestic terrorism threat.”

The US government’s extreme prejudice against animal rights and environmental activists is, of course, no freak accident. Like most everything in a profit-driven society, it comes down to who is paying who.

“By donating money to politicians and paying high-priced lobbyists to advocate for their interests,” writes Doris Lin, “corporations that profit from animal exploitation not only make sure that their legal right to use animals and treat them as property is codified in federal, state and local laws, but also make sure that government policies favor their rights and interests over those of the animals and the public.”

Which leads us directly to the Animal Enterprise Terrorism Act—passed by Congress and signed into law by President George W. Bush on November 27, 2006.

The law, explains the Center for Constitutional Rights, “was pushed through Congress by wealthy biomedical & agri-business industry groups such as the Animal Enterprise Protection Coalition (AEPC), the American Legislative Exchange Council (ALEC) and the Center for Consumer Freedom (CCF), with bipartisan support from legislators like Senator Dianne Feinstein and Representative James Sensenbrenner. The new law replaced its predecessor, the Animal Enterprise Protection Act (AEPA), which had become law in 1992.”

Mic Check: If you don’t think the AETA casts a treacherously wide net, re-read that last paragraph and juxtapose it with this biblical excerpt (John 2:13-16): “In the Temple courts (Jesus) found men selling cattle, sheep and doves and others sitting at tables exchanging money. So he made a whip out of cords and drove all from the Temple, both sheep and cattle; he scattered the coins of the money changers and overturned their tables. To those who sold doves he said: ‘Get out of here.’”

The next time someone asks you: “What would Jesus do?”

Please allow me to repeat: It’s not nearly enough to rise above the latest man-made conflicts and/or differences and proudly declare oneself a “humanist.” In the name of holistic justice and planetary rebellion, we must go deeper to identify as earthlings and stand—fists raised—in solidarity with all of our fellow earthlings.

Good place to start: Work to abolish the AETA.

‘Regardless of how one feels about animal rights or animal rights activists, the targeting of political activists as ‘terrorists’ because they cause a loss of corporate profits sets a dangerous precedent,” writes Will Potter. “Occupy Wall Street (OWS), for example, clearly is focused on challenging corporate power and has utilized a diversity of tactics currently classified as ‘animal enterprise terrorism,’ including non-violent civil disobedience and home demonstrations. If this legislation is not overturned, it will be the blueprint for targeting all protesters that pose a threat to business as usual.”

The system being challenged OWS is built, in a major way, on the exploitation of non-human animals and the eco-system.

If you’re working to dismantle corporate power, expand freedoms, and create a safer, more sane culture, you already have plenty in common with animal rights activists. Why not take things even further and recognize that the mighty 99% also includes non-human animals—and the entire ecosystem itself?

Mickey Z. is the author of 11 books, most recently the novel Darker Shade of Green. Until the laws are changed or the power runs out, he can be found on an obscure website called Facebook.