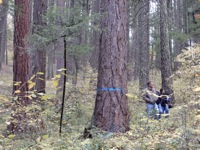 Four environmental groups are protesting the U.S. Bureau of Land Management’s plan to harvest about 2.5 million board feet of timber from the slopes of Grizzly Peak and throughout the Little Butte Creek watershed.

Their primary concerns with the Rio Climax timber sales are the construction of new roads and harvesting of some trees larger than 30 inches in diameter, said George Sexton, conservation director for the Klamath-Siskiyou Wildlands Center.

“Eighty percent of the plan, everyone sees eye-to-eye on,” said Sexton. “We can live with some of the small-diameter thinning, but not with the 30 inches in diameter. We asked them to back off that, and the BLM couldn’t even come that far.”

KS Wild and Rogue Riverkeeper, both of Ashland, and Cascadia Wildlands and Oregon Wild, both of Eugene, filed an administrative protest against the Rio Climax Forest Management Project and the BLM’s findings that no significant environmental impact would arise from the logging.

Sexton said the groups are concerned that habitat for the northern spotted owl would be adversely affected, and they object to the reopening of a section of road a few hundred yards long from the parking lot of the Grizzly Peak trailhead for hauling logs.

The road likely will be used to place a yarder for pulling logs up the hillside.

The BLM has been preparing the Rio Climax project since 2010, said Kristi Mastrofini, natural resource staff administrator for the Medford District. The project encompasses about 857 acres for harvest unit logging.

Only about 475 acres of that are being commercially logged, Mastrofini said. The focus for the remaining acreage is stewardship contracting for fuels treatment, and will include thinning and harvesting some marketable logs to help offset the cost of fuels reduction.

None of the three sales has been awarded, due to the Dec. 5 administrative protest, but two have been purchased so far.

Rio Rumble, with about 1.152 million board feet of timber, was purchased by Rough & Ready Lumber Co. of Cave Junction for $86,727.

Most of the larger trees being cut throughout the units are Douglas fir infested with mistletoe, Mastrofini said. Some are being taken down to make room for mature ponderosa pine trees to continue developing, she said.

About 17,550 trees total will be cut down and hauled to mills, Mastrofini said. Of those, about 174 are more than 30 inches in diameter at breast height, she said.

“This project is designed to improve stand vigor, growth and forest health, and further fuels reduction in the area,” Mastrofini said. “It also provides an economic benefit for forestry workers in our region.”

To move the logs from the woods, the plan calls for the construction of about one-and-a-half miles of permanent road, and less than a half-mile of temporary road.

After an initial environmental assessment approved a plan to build about three miles of road for the logging effort, the BLM agreed to cut that amount in about half.

Sexton said constructing the new roads will only add to the negative impacts past road building has had on streams in the watershed, which are tributaries to the middle Rogue River and host annual salmon runs.

“We can’t even maintain the timber roads we have “… why build more roads in an area with such a high road density?” said Sexton. “I think we could get it done without that “… especially in an area that is off-the-charts important for salmon and steelhead entering the middle Rogue.”

Mastrofini said none of the timber sales will be awarded before the BLM finishes reviewing the administrative protest submitted by the environmental groups.

That could take until March, she said, and could be followed up by an administrative appeal from the environmental groups if the BLM decides to rule against the protest, dragging out the project further.

If the BLM decided to go ahead with the project after those processes are completed, the environmental groups may sue, said Sexton.

“We’d much rather work together than against them, but for that to happen we’d need a responsible partner to negotiate with,” he said. “So we’re sharpening our pencils.”