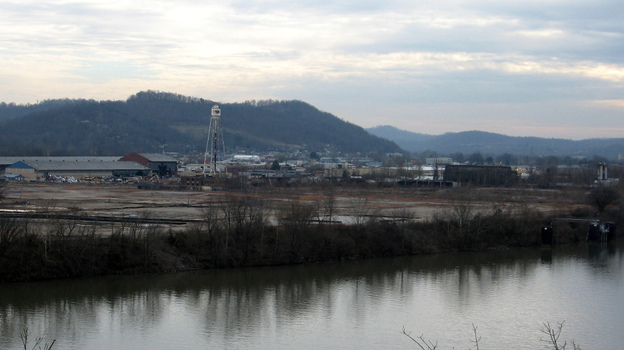 The former Monsanto chemical plant site along the Kanawha River, where for more than 20 years, the plant produced a herbicide that is the principal component of Agent Orange.

For about two decades, ending in 1971, a former Monsanto chemical plant in West Virginia produced the herbicide 2,4,5-T which was used in “Agent Orange” — the defoliant the military sprayed over Southeast Asia during the Vietnam War.

Now, Monsanto faces a class-action lawsuit, filed on behalf of people living where the herbicide was manufactured in Nitro, W.Va.

Nitro became a town during World War I , named after the type of gunpowder workers produced there. Later private companies like Monsanto manufactured other chemicals in Nitro, employing thousands of people. It’s always been a chemical town.

“If you ever drove over the I-64 bridge at Nitro, you really got an odor back in the ’60s and ’70s,” says Nitro Mayor Rusty Casto. But now the plants are gone.

The class-action lawsuit was filed on behalf of tens of thousands of people who lived, worked and went to school in Nitro after 1949. The suit claims the company spread toxic substances all over town, mainly dioxins, which have been linked to cancer. At issue in this case: whether Monsanto will have to pay millions of dollars to monitor the health of everyone included in the case.

“We need to have the facts about what these chemicals were, what they were all about, where the residue then was deposited,” says Jim Lewis, a retired Episcopal priest in nearby Charleston.

Lewis says residents also need to be fairly compensated. But in Nitro, while most of the residents remain part of the lawsuit, many have mixed feelings about the case.

Gertie Estep, 79, spent a decade working for a chemical plant; most of her family was employed by Monsanto, where she says the pay was good.

“We raised our families from those plants and we had no problems,” says Estep, “Of course I know a lot of people in Nitro have had cancer, but I’m not sure [whether] they can blame that on the plants or not.”

That is one of the many issues that will be argued before a jury in court. Attorneys for the plaintiffs and for Monsanto won’t comment on the case. The court has issued a gag order out of concern pretrial publicity could sway the jury.

This is not the first time lawyers have sued Monsanto over health effects in Nitro. In the 1980s a lawsuit was brought on behalf of seven former employees.

“We won one case,” says Nitro lawyer Harvey Peyton, who was a co-counsel on the case. “One man developed bladder cancer during the course of the trial. The jury found in his favor and awarded him some moderate damages.” But Peyton and his colleagues lost the other cases.

Peyton is not involved in the current class-action lawsuit, but he has followed it. There’s one development he finds troubling. Originally the suit called for Monsanto to both monitor people’s health and clean up polluted property. The court rejected the property claims last year, leaving just the medical monitoring.

“So you just brand this class area as ‘dangerous’ from a health standpoint, but there’s nobody to clean it up,” says Peyton.

The cleanup issue is still being appealed. Meanwhile the medical monitoring case is headed to trial after settlement negotiations failed. A jury has been selected and the court says opening arguments could begin as early as Feb. 13.