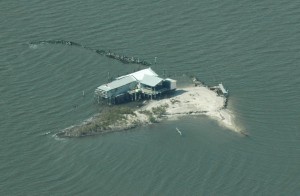 More than six years after Hurricane Katrina plowed into New Orleans and the Mississippi River delta, a plan has finally emerged to protect the area from future storms. It relies heavily on the restoration of wetlands to cut down high surges of ocean water like those that flooded the city in 2005—somewhat of a surprise, considering past efforts focused on levees and seawalls.

Last week, after prolonged deliberations over competing plans between state and federal agencies, the U.S. Army Corps of Engineers, and cities and parishes (counties), the state’s Coastal Protection and Restoration Authority released the Louisiana Comprehensive Master Plan for a Sustainable Coast. If all its provisions are carried out, the work would require $50 billion over 50 years. 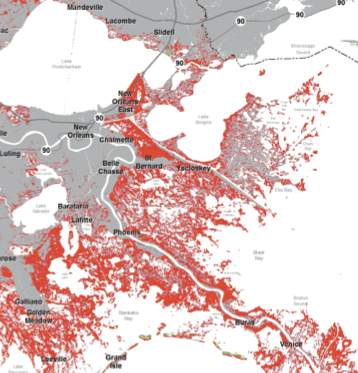 Land that would be lost (red) if the protection plan is not undertaken.

The plan includes maps of what the state’s refurbished delta would look like from the air by 2061. It also shows maps of the wetlands that would disappear by 2061 (see image below), as well as the extent of flooding that storms such as Katrina would bring, if the projects aren’t built. Southern Louisiana has lost 1,883 square miles of wetlands during the past 80 years, an area three-quarters the size of Delaware, largely because of erosion that has been catalyzed by hundreds of miles of manmade navigation channels and oil and gas pipeline canals. Most of that land will not be regained. But if the plan’s projects succeed, by 2042 the state would begin to gain more land annually than it loses, and by 2061 it would gain an average of about 2.5 square miles a year.