by Gordon Davis  /  The Scottish Farmer 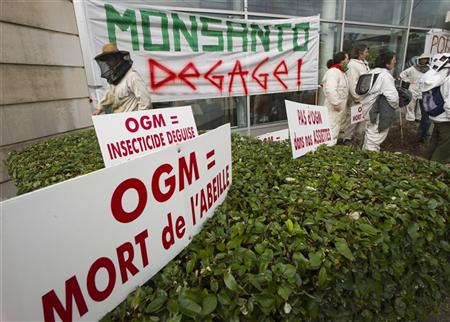 French beekeepers demonstrate to protest the use of genetically-modified organisms in front of French Monsanto headquarters in Bron, near Lyon, January 20, 2012. REUTERS/Robert Pratta

FRANCE HAS held firm in its opposition to Monsanto’s genetically modified MON 810 maize – and the agri-chemical multinational has admitted defeat.

Monsanto had been putting legal pressure on the French government to lift its 2008 cultivation ban on MON 810, firstly with a successful appeal to the European Court of Justice, then with a follow-up case heard in France’s own highest court, the Council of State.

But despite both these institutions ruling that the ban was “insufficiently justified in law”, the French Government, backed by President Sarkozy, has insisted that it will still not allow cultivation of the biotech maize.

Now Monsanto has announced that it would not be selling seeds for MON810 in France this year.

France’s stand – and Monsanto’s capitulation – has been warmly welcomed by anti-GM lobbyists GM Freeze, whose campaign director Pete Riley said: “The decision by Monsanto not to market MON810 seeds in France in 2012 is yet another sign that Monsanto has failed to convince the public or policy makers that there is any benefit to growing to growing GM crops.

“This needs to be acknowledged by industry and politicians and there should be a big shift to agricultural research and development which addresses the future sustainability of farming in Europe. EU policy needs to forget about the bottom line of biotech corporations and focus on developing agro-ecological farming which provides for the needs of farmers, consumers, the environment and future generations.”

Five other EU countries – Germany, Greece, Austria, Luxembourg and Hungary – have current bans on MON810 cultivation in place, and the issue has recently been complicated by another European Court of Justice ruling requiring honey contaminated with GM pollen to be fully authorised as a novel product and labelled as such before it can be sold.