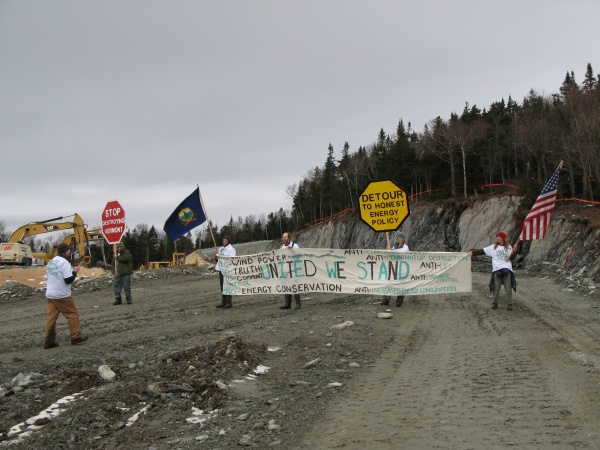 The arrests mark a change in strategy for the protesters, who had been camping near where crews were blasting to make way for construction of turbines. Most of them abided by a court order to stay clear of the blasting, but the blasting in that area and the court order ended Friday.

Monday, the protesters sought to block construction vehicles from operating on disputed land, said wind-project opponent Steve Wright. Wind-project opponents Don and Shirley Nelson claim they own the land — but Green Mountain Power leases the property from Trip Wileman, whom the utility argues owns it.

Orleans County Sheriff’s Chief Deputy Philip Brooks said Green Mountain Power officials called authorities to report protesters were trespassing. Protesters were given a chance to leave, but seven refused, Brooks said. They were processed at the state police station in Derby and cited to appear in court later this month, he said.

Green Mountain Power spokeswoman Dorothy Schnure said the incident delayed work in the area for about an hour.

According to Brooks, those cited were:

• Robert Holland, 67, of Irasburg, one of the leading opponents of the 21-turbine project.

• Christopher Braithwaite, 67, of Glover. He is publisher of the Barton Chronicle newspaper.