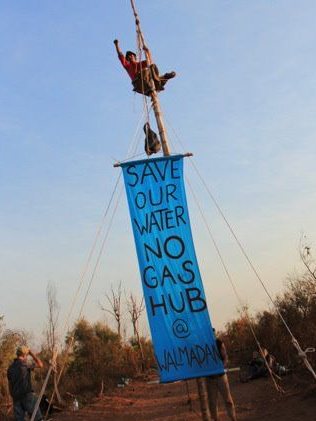 A PROTESTER has tied himself to a communications tower near a proposed gas hub site in the Kimberley in a bid to stop survey work for the controversial project.

The protester scaled the 30-metre tower at around 4am today and is suspended by a rope between the top of the tower and the ground near James Price Point [Walmadan]. Anti-gas hub protester Joseph Roe has told AAP the rope crosses an access road and any attempt to cut it to allow Woodside Petroleum contractors in would endanger the protester.

Police are at the site about 60km north of Broome where protesters have gathered to support the man up the tower. “If they cut the rope there will be a terrible accident. The police don’t know what to do,” said Mr Roe, a Jabirr Jabirr-Goolarabooloo man who has pursued extensive legal action against the project.

The protester up the tower, Scott Daines, has said he would stay there “for as long as it takes for Woodside to leave”.

Woodside contractors have been carrying out geotechnical survey work around the site of the proposed $30 billion liquefied natural gas (LNG) precinct, with protesters keeping a constant vigil on the access road.

Mr Roe said he wanted answers from the Broome shire council about approvals for the tower to be changed from a weather observation station to a communications point for the Woodside project.

He said the gas hub project was a land grab by WA Premier Colin Barnett who was “hell-bent on industrialising our traditional lands”.

The Kimberley Land Council, on behalf of traditional landowners, has signed off on the deal which would deliver $1.5 billion in benefits to the region’s Aboriginal communities.

But the proposed gas hub has divided the Kimberley Aboriginal community and Broome residents. A final sign-off for the project by Woodside and its joint venture partners is expected by the middle of next year.