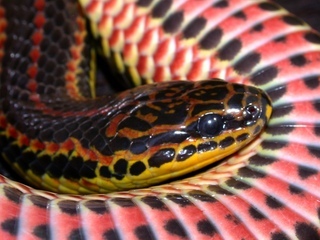 Earlier this month, October 5, 2011, the US Fish and Wildlife Service announced that two Florida species, the South Florida rainbow snake and the Florida fairy shrimp, have been determined to be extinct. The finding came in response to a petition filed by the Center for Biological Diversity in 2010 seeking Endangered Species Act protection for the rainbow snake, fairy shrimp and more than 400 aquatic species in the southeastern United States. Last week the Service announced that 374 other freshwater species in the petition, including 114 in Florida, may warrant protection under Act. All of those species will now get an in-depth review.

The South Florida rainbow snake was known only from Fisheating Creek, which flows into the west side of Lake Okeechobee. The snake was iridescent bluish-black with red stripes on its back and sides, red and yellow patches on its belly and throat, and a yellow chin. Adults were more than four feet long. It was last seen in 1952.

The Florida fairy shrimp was known from a single pond just south of Gainesville. The pond was destroyed by development, and the species hasn’t been detected elsewhere.

The full statement from Center for Biological Diversity can be found here.