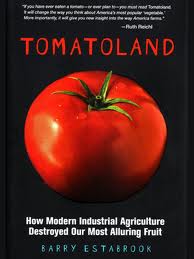 A review of Tomatoland: How Modern Industrial Agriculture Destroyed our Most Alluring Fruit, by Barry Estebrook, 2011, Andrews McMeel Publishing

The following are excerpts from a full book review, by Sasha, featured in the EF! Newswire’s growing ‘Reviews’ section:

Author Barry Estabrook shows us the pesticide-ridden fields, he meets the workers who toil in the fields for a less-than-living wage under constant threat of injury, slavery and even death, and he discusses law and direct action with the Coalition of Immokalee Farm Workers.

As industrial agriculture has taken hold, it has destroyed the tomato. Distilling the genes that comprise its smell, taste and shape from biotech labs, major transnational corporations like Monsanto create the seeds that are planted. The plants are then saturated with methyl bromide, a potent toxin that causes birth defects in the migrant farm workers who use them daily, picked before they are ripe, sprayed with a chemical to make them red, refrigerated and trucked to the store where you buy them.

Far from being a natural process, the tomato farming business has adulterated Earth and its plants to make a cheap buck—and the farmers who apparently run this business are not making money; thanks to NAFTA and the composition of the modern economy,

the Monsantos, banks and transnational middle-men have skimmed off the top so that even with migrant labor literally turning into captive slavery, farmers are barely able to make ends meet…

At this period in history, with anti-immigrant laws passing throughout the US, a book like Tomatoland is like an oasis of honesty and sincerity.