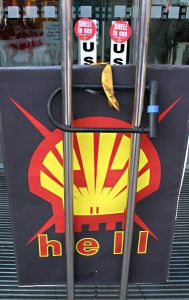 Photo from Shell Dubin HQ being blockaded in solidarity with Rossport, 2006

Rossport Solidarity Camp activists pull off another lock-on protest (or lockdown, as some say) on the roadside in north Mayo, near the site of Shell works for the controversial Corrib gas project, meant that operations were impeded until lunchtime Monday. The two protestors were arrested and charged at Belmullet Garda Station with Public Order Offences.

A spokesman for the Rossport Solidarity Camp confirmed that the two protestors were locked by their arms into a concrete barrel, on the north coast road, from shortly before 7am yesterday morning. This blockade is part of an intensive series of on-road actions, taken by the camp and Shell to Sea, since Shell started works at the Aughoose site for the 4.9km sub-sea tunnel during late July.

A camp spokesman confirmed to The Mayo News that a Garda Síochána cutting team arrived around 9am yesterday morning and was supported by over 20 other gardaí. The protestors were cut from the barrel by 1pm.

He said, the action was also taken to highlight Shell’s recent oil spill at the Gannet Alpha platform, in the North Sea.

Shell is one of the joint venture partners for the proposed LNG at James Price Point, where, according to the Hands Off Country website, conservation groups are far from pleased with draft sanctuaries for northern Australian waters which fail to protect endangered species from controversial fossil fuel extraction plans.

It also aims to protect the breeding ground where each year more than 10,000 humpback whales migrate to mate and give birth in the waters off the Kimberley. The proposed networks of marine reserves are in commonwealth waters which start 5.5km off the coast.

However, the Save Our Tropical Sealife alliance says some of the most vulnerable marine life in Australia, including dugongs and the snubfin dolphin, would still be under threat from fishing nets, oil and gas drilling and mining operations.    Source