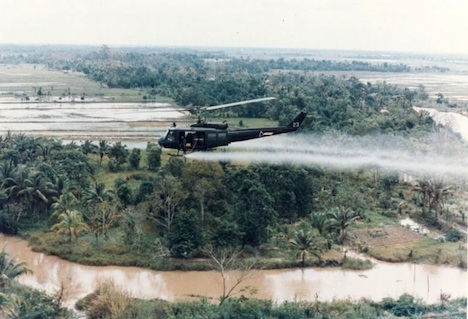 Agent Orange is one of the most devastating weapons of modern warfare, a chemical which killed or injured an estimated 400,000 people during the Vietnam War — and now it’s being used against the Amazon rainforest. According to officials, ranchers in Brazil have begun spraying the highly toxic herbicide over patches of forest as a covert method to illegally clear foliage, more difficult to detect that chainsaws and tractors. In recent weeks, an aerial survey detected some 440 acres of rainforest that had been sprayed with the compound — poisoning thousands of trees and an untold number of animals, potentially for generations.

Last week, in another part of the Amazon, an investigation conducted by the agency uncovered approximately four tons of the highly toxic herbal pesticides hidden in the forest awaiting dispension. If released, the chemicals could have potentially decimated some 7,500 acres of rainforest, killing all the wildlife that resides there and contaminating groundwater. In this case, the individual responsible was identified and now faces fines nearing $1.3 million.

“They [deforesters] have changed their strategy because, in a short time, more areas of forest can be destroyed with herbicides. Thus, they don’t need to mobilize tree-cutting teams and can therefore bypass the supervision of IBAMA,” says Jerfferson Lobato of IBAMA.

Last month, over three decades after Agent Orange was last used in Vietnam, the US began funding a $38 million decontamination operation there. Meanwhile, in the Brazilian Amazon, the highly toxic chemical was being discovered anew and sprayed over the rainforest.

To read more, see the full write-up at Treehugger