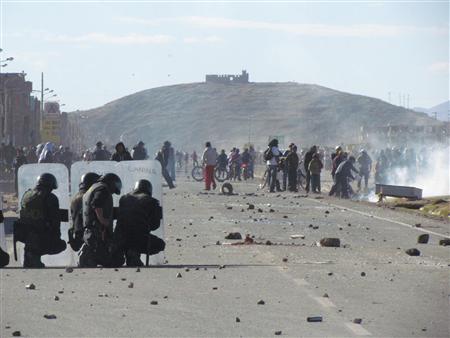 Thousands of protesters opposed to mining and energy projects in southern Peru took over a commercial airport on Saturday, officials said, as the government struggled to restore calm a day after five died in a clash with police.

Herbert Rosas, a police general, told Reuters some 3,000 protesters had occupied the runway at the Juliaca airport in the region of Puno and that several hundred police officers retreated to avoid another clash.

Departing President Alan Garcia, whose tenure has been marred by conflicts over natural resources that have killed nearly 100 people over the past three years, said the mostly indigenous protesters were making a show of force to get a slice of power in the government of President-elect Ollanta Humala, who takes office on July 28.

“There are dark political interests here that are demanding power,” Garcia told reporters. “What they are trying to do is pressure the next government of Ollanta Humala by issuing threats and forcefully demonstrating,” Garcia said without providing further details.

Humala, a leftist former army officer, campaigned on promises to end bitter conflicts that pit poor towns against mining and oil companies. Humala has promised to govern as a moderate, but his traditional support base is in Peru’s poor southern provinces.

Protesters often mobilize to protect scarce water supplies, what they see as ancestral lands, or complain about potential pollution from new mines.

Often times they also demand direct economic benefits from mining and oil projects, which have helped turn the Andean nation’s economy into one of the world’s fastest-growing but left behind a third of its people in poverty.

On Friday, hours before the deadly clash at the airport, Garcia’s cabinet revoked the license of Canadian mining firm Bear Creek in a bid to persuade locals residents to end protests that have dragged on for more than a month.

Bear Creek Chief Executive Andrew Swarthout has told Reuters the company would sue the government to get its concession back and mining analysts have said the government’s move could lead foreign companies to think contracts aren’t respected in Peru.

But Garcia said stability and social peace was more important. In the days before the clash at the airport, the first time the protests turned deadly, protesters had set fire to government buildings in the area.

“I think there are more important objectives and the first one is to guarantee a peaceful transition and a trouble-free start to the government of Ollanta Humala,” Garcia told reporters.

Some 5,000 protesters, mostly Aymara Indians, have descended on Puno over the past few weeks to demand concessions be revoked for all mining companies, not just Bear Creek’s Santa Ana project, ostensibly over concerns about potential pollution.

Magazine Caretas reported this week, however, that wildcat miners are interested in Bear Creek’s concession and are working alongside protesters.

Locals think the land has valuable gold deposits in addition to silver.

Bear Creek, whose share price has sunk during the protests, had planned to produce silver starting in 2012 in Santa Ana, located some 1,385 km (860 miles) from Lima. The mine has reserves of 63.2 million ounces of silver.

(Reporting by Terry Wade and Enrique Mandujano in Lima and Julie Gordon in Toronto, Editing by Sandra Maler)