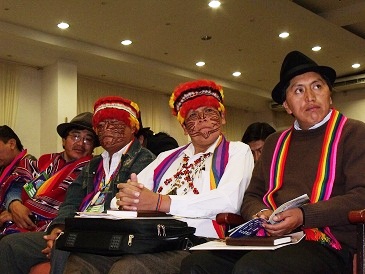 During three days in the city of Cuenca, Ecuador, hundreds of representatives from several Latin American countries gathered to share experiences and strategies during the Continental Conference in Defense of Water and Mother Earth. The event took place between June 17 and 23, and was organized as an act of resistance against development projects that threaten this vital resource, Yakumama, our mother water. A letter of intention by the organizers reads, “We hope this gathering will become a permanent process of fellowship to protect water and food sovereignty, to create a new social order in harmony with nature, with justice and equity.”

The conference began with a visit to sites where environmental conflicts have taken place, in Cochapata and San Bartolomé, more specifically, in the southern province of Azuay, both areas affected by mining companies. The delegation was composed of the Ombudsman, representatives of national indigenous organizations, the Inter-American Platform of Human Rights, Democracy and Development (PIDHDD), Real World Radio, and a team of FoodFirst Information and Action Network (FIAN) International. There they witnessed cases of abuse of power by developers, often in complicity with state agencies, that are laying out mining projects despite clear opposition from the communities where they plan to implement them.

In Cochapata, for example, a community of about 7,800 people, there has been great resistance against the construction of a dam by the mining company Explorsur SA. Seven community leaders were accused of sabotage and terrorism for engaging in public protest, and were recently sentenced to eight years in prison. This occurred despite the fact that the Constituent Assembly had granted them amnesty in July 2008, recognizing their role as environmental defenders. Since then, all seven have been in hiding with serious financial and emotional consequences to their families. Unfortunately, like in many other cases, the courts favour private interests instead of communal decisions on how to manage land and water resources. Currently, there are more than 189 pending cases of terrorism and sabotage in Ecuador.

Back in 2007, at the beginning of his government, President Rafael Correa made a public statement setting the stage for what was to come. “Don’t believe in romantic environmentalists. Anyone who is opposed to development in this country is a terrorist,” he said about the community of Dayuma, Orellana province, who at the was time protesting the environmental devastation in their territory that resulted from oil drilling in the region. The protest was met with police repression and 25 people were detained.
For this reason, one of the main objectives of this conference was to expose these kind of cases, thus exemplifying the ongoing criminalization of protest in Ecuador. An integral part of the conference was a Court of Ethics that analyzed “the criminalization of defenders of human rights and nature.” This people’s court took place on Wednesday, June 22, with the presence a jury of four international authorities: Elsie Monge (Ecumenical Commission of Human Rights, CEDHU, Ecuador), Raul Zibechi (writer and journalist, Uruguay), Leah Isabel Alvear (poet and academic, Colombia), and Mary Hamlin (International Movement for People’s Health). They listened to more than four hours of testimonies and 17 cases of people accused of terrorism. 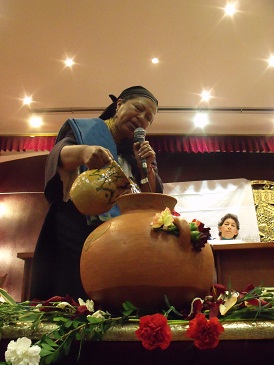 “Democracy can only be guaranteed when citizens are guaranteed their rights to protest and resistance,” testified Ramiro Avila, a lawyer and professor at the Universidad Andina Simón Bolívar. “These laws are being used to suppress protest and should be immediately repealed.” Avila explained that the law under which the right to protest is criminalized in Ecuador dates back to the early republic, based on the Penal Code of 1920.
The current government of Ecuador, under President Correa, is driving an aggressive development program that is fueling social conflicts all around the country, mostly around mining and oil industries and the control of water sources. Unlike other countries such as Peru and Bolivia, large-scale mining is new to Ecuador and it’s expected to have severe consequences to its many ecosystems. According to the Ministry of Energy and Mines, there are 1990 registered mining concessions in the country, causing serious concerns among civil society, particularly campesinos and indigenous people. “The social leaders are speaking out to defend their human rights, but instead of welcoming them the State is criminalizing their right to protest,” said Fernando Gutierrez, the National Ombudsman.
The most prominent case is that of four top indigenous leaders, all of them charged with terrorism and sabotage: Pepe Acacho, vice president of the National Confederation of Indigenous People (CONAIE), Marlon Santi, ex-president of CONAIE; Delfín Tenesaca, president of the Kichwa Conferedation of Ecuador (ECUARUNARI); and Marco Guatemal, president of Indigenous and Campesino Federation of Imbabura (FICI). They were tried for participating in marches against the Water and Mining Acts during the ALBA Summit in Otavalo in June 2010.
“Is it a crime to defend the water? Is it a crime to defend Mother Earth?” said Carlos Perez, an indigenous leader of Azuay. “Ecuador was pioneer in recognizing the rights of nature, thus the Constitution should be above a criminal code created in times of a dictatorship.” Ecuador was the first country to recognize the Rights of Nature in its Constitution of 2008.
The jury’s decision did not make itself wait. The verdict given was resolute, not only in acknowledging that people opposed to the government’s extractive activities are currently living in an atmosphere of fear and criminalization in Ecuador, but that the State is directly responsible for promoting and maintaining this situation. “These cases confirm that there is a systematic practice to discipline social protest and thus eliminate it,” reads the verdict. “While justice is employed to criminalize the defenders of nature, it remains passive before human rights violations committed against them and against nature.”
It furthermore recommends that the President refrains from making public statements that “delegitimizes and stigmatizes” defenders of nature and human rights. To the judicial powers it recommends to comply with the amnesty granted by the Constituent Assembly in 2008 to all people prosecuted of crimes against the State under a ambiguous Penal Code that is largely considered obsolete.
Although this Court of Ethics does not have jurisdictional powers, it does hope to fill up the space created by the State’s omissions of abuses committed against peaceful social protesters and its exoneration of private companies “that operate in the country with impunity.” Correa´s government has yet to pronounce itself before the court’s decision.
Cross-posted from here
Posted in News and tagged assembly, Azuay, Cochapata, communities, community, companies, conference, consent, Continental, criminalization, Cuenca, defense, delegation, developers, development, Ecuador, energy, Environmentalists, equity, gathering, harmony, indigenous, justice, land, land rights, mines, mining, Mother Earth, nature, opposition, organizers, police, project, projects, protest, Rafael Correa, repression, resistance, resource, Sabotage, San Bartolomé, sovereignty, terrorism, tribunal, water, Yakumama.