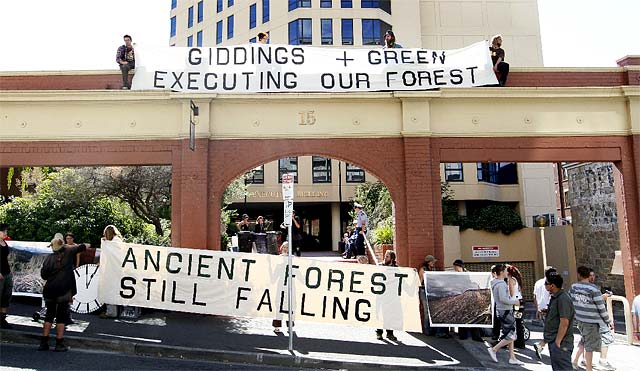 FOREST protest groups have slammed the axing of a moratorium due to start today that would have halted all logging in Tasmania’s high-conservation-value forests.

The Still Wild Still Threatened organisation and the Huon Valley Environment Centre held demonstrations outside the Executive Building in Hobart this morning, calling for the promised moratorium to be implemented immediately.

Mediator Bill Kelty announced last Friday that 550,000 hectares of public HCV forest identified by environmental groups would be protected for the next six months.

But the deal allows Forestry Tasmania to log these forests if necessary to meet existing wood supply contracts with customers such as Gunns and local sawmillers.

Protestors climbed the historic wall in front of the Executive Building and erected a banner, accusing Premier Lara Giddings and Forestry Minister Bryan Green of “executing our forests”.

Ms Weber called the lack of a definite end to logging within the three-month time frame established last October – in the original roundtable Statement of Principles agreement between environmentalists and the forest industry – a “huge bungle”.

“This is not a moratorium, it’s not even a B-Grade moratorium,” Ms Weber said.

“We feel betrayed that HCV forests continue to be logged. That’s not what the state and federal governments promised last December.”

Ms Weber said her organisation stood by Environment Tasmania, the Wilderness Society and the Australian Conservation Foundation groups that had signed the latest deal.

But she said that did not mean the Huon Valley Environment Centre or Still Wild Still Threatened, supported their decision.

“They’re representing forest protection but have different tactics and strategies to us,” Ms Weber said.

“So while we support them being engaged in these talks, we are deeply concerned there is no moratorium and can’t support the Kelty [agreement].”

Greens leader Nick McKim said it was disappointing no absolute moratorium had come into force today, on the expected March 15 deadline for logging to end in more than 600,000 hectares of HCV forests.

“It’s not a full moratorium and while you are still logging, it could be argued you don’t have a moratorium at all,” Mr McKim said.

The Greens have also demanded the Government advise if Forestry Tasmania has in the past three months signed any new wood supply contracts using native forest logs or woodchips.