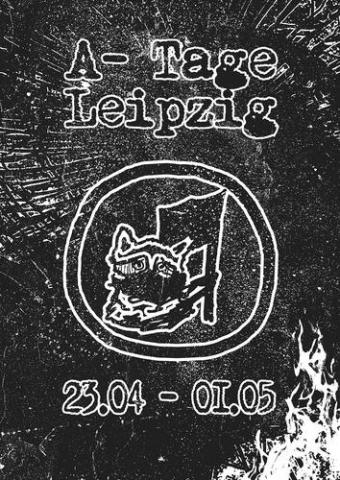 This is an invitation to the Anarchist Days around the first of May. Come by, participate, network and educate, join in, get involved. We look forward to seeing you!

But is there any potential at all for a livable togetherness despite all the crises in which this form of society finds itself, despite the worldwide trend towards authoritarianism? Anarchists say: yes. Because it is the existing hierarchical order in which people are exploited, subjugated and alienated. We need fundamentally different ways of living, producing, consuming, organizing, orienting, exchanging, relating and engaging with each other. Climate change, patriarchal violence, border regimes, pandemics, wars, inflation, gentrification… We don’t even know where to look first to understand the dead end this system has navigated us towards. That’s why the demand to build a radically different form of society seems to be a realistic option that interests far more people than we sometimes think.

We think anarchists do many exciting things to become capable of acting despite the imposed contradictions and to search for alternatives. By this we refer to long and global history where people have stood up to fight for their dignity. No matter how fucked up the world is right now. There are thousands of valuable experiences and reflections in anarchism that inspire and motivate us to strive for something new. We should bring them to the outside world. But to do that, we need to know our own foundations and expand and deepen our networks. This also applies to Leipzig. It is true that there are comparatively many anarchists here, whose various activities we value. But we also see potentials to bring them together for common actions and to encourage each other in this fight.

With the second Anarchist Days we want to gain awareness about ourselves again. We learn about what anarchism was and is concretely today by meeting and getting to know each other. Anarchists fight for everyone to be self-determined and self-fulfilling. With advancing digitalization, lack of time and isolation, this is becoming increasingly difficult, but all the more we will fight for the self-determination of all. Because this requires building a solidary, free, equal society, we organize ourselves. Our groups serve to empower people, educate them, support social struggles, and bring forth direct action. By doing that we also vividly demonstrate how we are already realizing our own aspirations.

The key to this is the pursuit of autonomy. Instead of social movements being appropriated and integrated into the existing framework, we are looking for forms beyond nations, parties, majority unions and so-called wellfare society. At the Anarchist Days we will connect different struggles, discuss our anarchist perspectives and develop skills, learn from each other and maybe start one or two actions. And we will do this in a self-confident, self-determined and self-organized way.

Feel free to forward this text to people and groups you think would be interested.

Mark your calendars for Anarchist Days between April 22 and the first of May 2023 – and get in touch if you want to submit contributions. We see our group as coordinating only to create a common program and framework. The Anarchist Days live from the fact that many groups and people participate. This group can only contact a few groups specifically. People and groups who want to contribute should take care of the communication, spaces and resources of their proposed contributions themselves as much as possible. We will then tie this together into a more or less cohesive program.

Write to us if you:

– want to organize your own contributions to the Anarchist Days (lecture, workshop, discussion, film…)
– want to organize or offer workshops on practical topics (screen printing, lock picking, etc.)
– you want to make a cultural and/or social contribution (bar evening, reading, concert, party, film)
– want to be part of the support group (meets in advance to take care of different tasks, e.g. shopping, bar shifts etc.)
– any other ways you can support us during the days (sleeping places, child care, awareness, Küfa, bar shifts…)
– …

We want to connect different realities of life and points of view instead of getting lost in a scene bubble. We are aware that we ourselves are part of a hierarchical, patriarchal class society formed by supression. For us, emancipation means seeing ourselves in a process in which we reflect on relations of hierarchies and change our ways of thinking and behaving. For this, people have different starting conditions and possibilities, from which, however, they should develop further. In this context, we consider a respectful, appreciative and solidary interaction with each other to be necessary.

It is important for the contributions that a reference to anarchist perspectives and approaches is visible. When selecting the contributions, we pay attention to intersectionality (= intersections of different forms of supression) and want to represent a plurality in anarchism. Furthermore, we do not only want to convey certain contents, but above all have space to discuss what we can do with them.