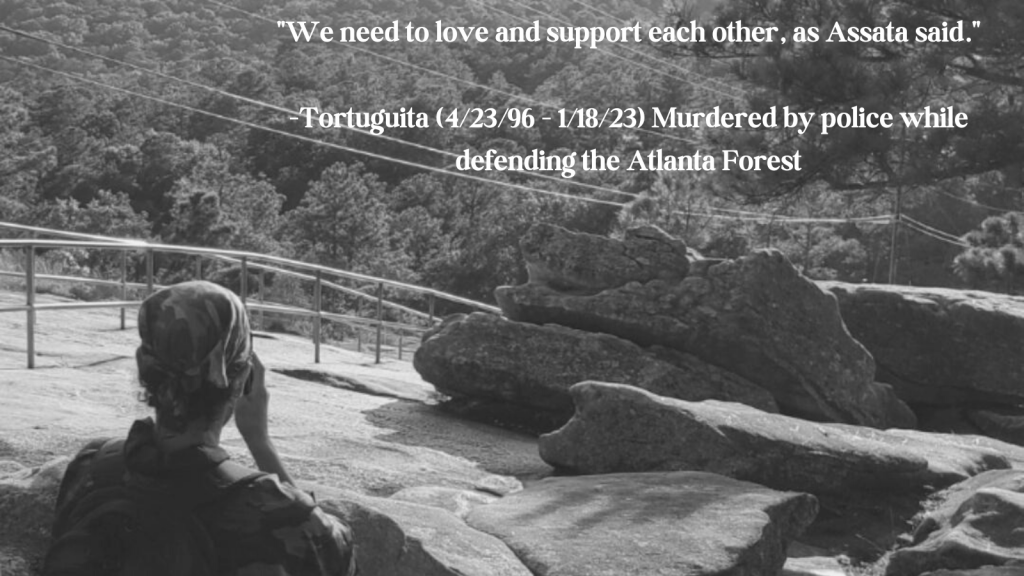 On the Night of Rage (January 20) the Detroit MI Atlas offices were artfully decorated with acid-etching paint. Hope you had fun discovering that your windows are totally fucked, you shitheads. Atlas, until you stop supporting Cop City, there will be no safe corner for you on Turtle Island.

We did this in Tortuguita’s name. We love you, friend, and will never stop fighting. Love and rage to all those fighting in Atlanta.

-Your friends up north

Over the weekend, forest defenders vandalized the Boulder, Colorado office of KPMG, one of the financiers of the destruction of the Atlanta forest. Messages of “Stop Cop City” “Viva Tort” and “KPMG: Divest From Cop City” were left on the office windows in self-etching paint. A nearby UPS box was also hit. 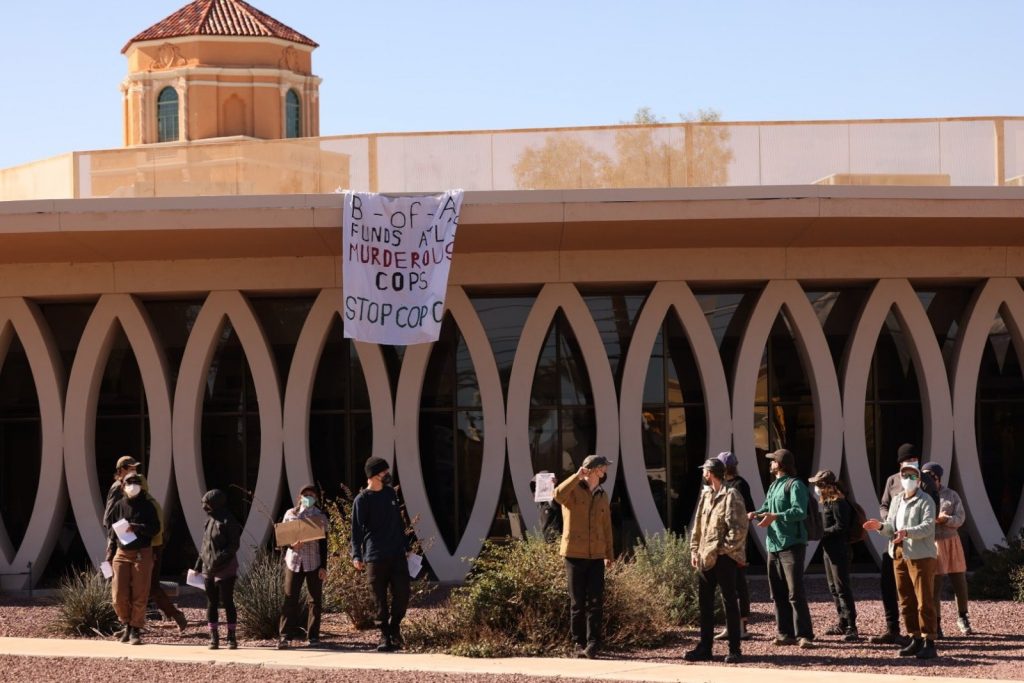 On Saturday, a group of about 20 people gathered at the Bank of America building on East Broadway Boulevard in Tucson to express their grief and rage at the death of Manuel Teran, also known as Tortuguita, in the fight to defend the Atlanta Forest.

“This is the first action of the newly founded Tucson Chapter of the Weelaunee Defense Society,” said Ricky Flowers, a spokesperson for the group. “Across the country, those concerned about climate change, deforestation, and the expansion of police power in our communities are forming chapters of this organization to express their solidarity with the movement in Atlanta and around the world.”

The group convened around mid-day on Saturday at the northwest corner of Reid Park. From there, a short march brought them to the East Broadway Boulevard branch of Bank of America. Amidst chants of “Stop Cop City,” flyers were distributed contextualizing the recent murder of Tortuguita, the movement to defend the Atlanta Forest and its conflictual relationship against the police. Posters memorializing the murdered protester were additionally hung from the windows of the bank.

Meanwhile, a small group of protesters broke from the main group and, following a quick scramble up a ladder onto the branch’s roof, a banner was hung. It read: “B-of-A Funds ATL’s Murderous Cops / Stop Cop City.”

Bank of America is just one out of a number of major national funders donating to the Cop City project. 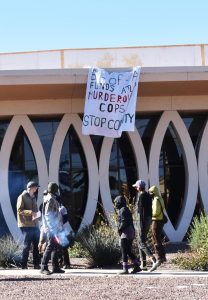 “Police in Atlanta think that they can stop the movement by charging protesters as domestic terrorists and now executing protesters in the woods,” said Flowers. “We’re here to tell them that the movement is spreading across the country. Wanting to stop the planet from burning is not terrorism.”

The Tucson chapter of the Weelaunee Defense Society expressed their intention to continue with similar actions in the coming weeks. “This is not a local struggle,” Flowers remarked. “If the Cop City project is built, it would be used to train police from across the country, expanding the overall infrastructure of repression nationally. This is a struggle that extends well beyond just one part of Atlanta–it affects us all.”

They noted that although Cop City is tied to a specific Atlanta neighborhood, it is tied to a nationwide infrastructure. “Cop City is everywhere; it can be attacked anywhere.” With this, the group stated that it will grow and expand its pressure campaign against local donors and supporters of Atlanta’s Cop City project. They say that they will keep fighting the project until it is completely stopped — in defense of the forest, in defense of the Earth, and in the memory and honor of Tortuguita.

Manuel “Tortuguita” Teran was born April 23, 1996. On Wednesday, January 18th, 2023, they were killed by police during a raid of the Weelaunee Forest. Those that knew and loved them describe them as a dear friend, a loving partner, and a proud, fierce anarchist. At the time of their death, Tortuguita spent their time between Atlanta and Florida. In the former, they were focused on defending the forest and coordinating mutual aid; in the latter, they focused on building low-income housing in communities hit hardest by the hurricane. In each account of their life, they are described as a kind, passionate, and deeply caring person who will be dearly missed.