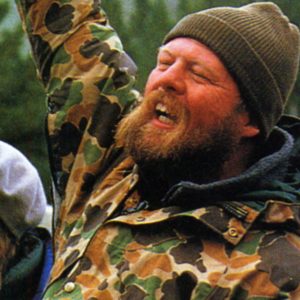 Dave Foreman, image clipped from the original cover of the 1990 book, Ecowarriors, by Rik Scarce.

Dave Foreman, who advocated for, wrote about and fought for wild nature his entire adult life, died at 74 on Sept. 19 in New Mexico, where he lived. He left an enormous legacy of work and writings, and  had a major impact on the modern environmental movement over the course of half a century.

After working for, and becoming fed up with, the Washington DC-based wilderness groups, he and several people including Mike Roselle, Howie Wolke, Susan Morgan and others, co-founded Earth First! in 1980. This deliberately radical, direct action environmental group would go on to change the face of environmental advocacy.

Foreman laid out his intentions in a 1981 article for Progressive magazine—in order to set a radical philosophical and tactical tone that would avoid the pitfalls of compromise, the Earth First! co-founders crafted an agenda of throwing the blankets off the conservatism of mainstream groups like the Sierra Club, to bring “vigor, enthusiasm and joy” to the tired environmental movement, to provide a “productive fringe,” inspire acts “straight from the pages of The Monkeywrench Gang, and fight with uncompromising passion for Mother Earth.” 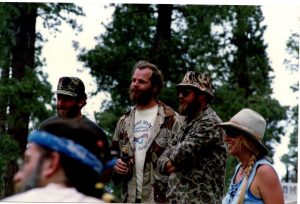 EF! co-founders Howie Wolke, Mike Roselle and Dave Foreman at the 1987 Round River Rendezvous on the North Rim of the Grand Canyon. Photo by kp

Foreman published the book, Ecodefense: A Field Guide to Monkeywrenching, in 1985—a how-to manual that created an uproar and probably contributed to Dave being arrested by the FBI in 1989. Undercover agents set up a group of activists in the desert of Arizona with equipment, funding and encouragement in an act of sabotage to a transmission tower delivering power to the Central Arizona Project,  bringing water to the lawns and golf courses of Phoenix. Dave was not part of these actions, but was charged with conspiracy nonetheless because of his notoriety and the Ecodefense book, which undercover agent Michael Fain bought a signed copy of from him. This case of the “Arizona 5,” was the first of what later became known as The Green Scare.

Foreman was a controversial figure. He could be a crusty sob, and was not always enlightened socially, particularly in his views surrounding immigration and pandemics, but he was one of the most motivating orators and passionate people to speak out on behalf of other species. He didn’t coin the term biocentrism, but he turned countless people on to the concept by way of thinking outside the anthropocentric box. Dave had the style of a preacher, and his religion was biocentrism; his church, the wild outdoors. 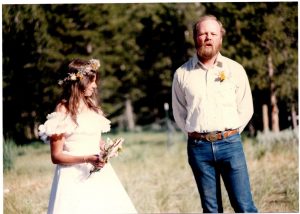 Dave and Nancy’s wedding under the maypole, at the 1986 EF! Round River Rendezvous in Idaho. Photo by kp

Dave and Earth First! parted ways into its second decade, and he went on to found the Wildlands Network in 1991 and the Rewilding Institute in 2003, both with a mission of identifying, restoring and protecting wildlife habitat and corridors.

But as one of Dave’s closest friends said to me in 2021, after Dave’s partner Nancy died, “In the end, I think we old EF!ers all share nearly all of the most important goals, even if our styles were different.” True, that.

Dave’s proposal for a statement of principles of the nascent Earth First! in 1980 defined his ideas:

He went on to further define his ideas and explain his perspective on the environmental movement’s history, biocentric philosophy and wilderness defense strategy in his autobiography, Confessions of an Eco-Warrior, published in 1991. He also published Rewilding North America: A Vision for Conservation in the 21st Century in 2004 and wrote or co-authored several other books.

[Editor’s Note: The EF! Journal collectives of previous years have grappled with anti-immigrant tendencies in radical environmental circles, of which Foreman was often associated with. While we are opting not to go into detail about that as we acknowledge his passing with this post, we also don’t want to dismiss or diminish those concerns. Readers can look into this themselves at links here and here.]