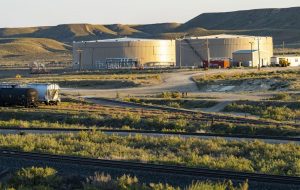 (Rick Egan | The Salt Lake Tribune) Since 2014, the Price River Terminal in Wellington, pictured on Friday, Sept. 17, 2021, has received Uinta Basin crude by truck and loaded it onto rail cars bound for out-of-state markets. A proposed 85-mile oil-hauling railroad into the basin has won final approval, drawing lawsuits from environmental groups and a Colorado county.

The proposed Uinta Basin Railway cleared its last major regulatory hurdle this week when the U.S. Forest Service dismissed an objection to a right of way it granted across 12 miles of a largely roadless part of Utah’s Ashley National Forest.

The Center for Biological Diversity and other environmental groups are fighting the oil-hauling project because it is intended to quadruple oil production in the Uinta Basin. They are upset with the Biden administration for approving a costly infrastructure project that would further lock in the nation’s reliance on fossil fuels blamed for climate change.

“President [Joe] Biden should be doing everything in his power to respond to the climate emergency, but he’s about to light one of the nation’s biggest carbon bombs,” said Deeda Seed, a Utah-based organizer with the Center for Biological Diversity. “This is pouring another 5 billion gallons of oil on the fire every year and bulldozing a national forest in the process. It’s a horrifying step in the wrong direction.” 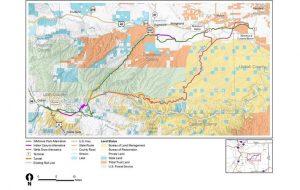 Seed and other activists say the project would result in “dire consequences” not just for the climate but for the Uinta Basin’s already compromised air quality and the sensitive ecosystems the proposed rail passes through, such as Indian Canyon. Numerous tunnels are needed to traverse the rugged terrain and bridges would span several waterways.

In a letter sent this week to environmental groups’ lawyer, Deputy Regional Forester Deborah Oakeson, based in Ogden, concluded the Forest Service decision on the right of way was sound, putting the matter to rest at the administrative level.

The groups have already gone to court with a suit aimed at overturning a decision by the federal Surface Transportation Board approving the railroad itself.

Railroad backers say the hydrocarbon-rich basin in northeast Utah could produce far more oil, but transportation bottlenecks limit production to about 90,000 barrels a day. Every drop of the basin’s waxy crude, which solidifies as it cools, must be trucked out of the basin to either Salt Lake City refineries or railways in Carbon County.

The Seven County Infrastructure Coalition, or SCIC, envisions an 85-mile railroad to connect a future loading station near Myton, centrally located near numerous oil fields, to the Union Pacific tracks at the head of Price Canyon.

While the line would be a common carrier available to any industry, the main point of the railroad is to get oil-filled tanker cars into the national rail network so Utah crude can reach new markets on the Gulf Coast.

Much of that oil traffic would pass through Colorado’s Rocky Mountains, where dozens of governmental entities have raised serious objections to the Utah project. Eagle County, the heart of Colorado ski country, filed its own suit.

While Utah’s seven-county group has secured federal approvals, big questions remain for the project, starting with how to pay for the construction, estimated to cost $1.5 billion. The so-called “public-private partnership” would build the nation’s first major new rail line in more than 30 years.

The coalition has partnered with Drexel Hamilton Infrastructure Partners, or DHIP Group, to raise private capital to build it and with Texas-based Rio Grande Pacific Corp. to operate and maintain it. Rio Grande has hired AECOM to design the railroad, Utah construction firm WW Clyde to build it in a joint venture with Skanska, and Obayashi Corp. to design and build the tunnels. The Ute Indian Tribe, which owns a substantial portion of the basin’s oil deposits, is an equity partner.

The coalition’s board meets Friday with Drexel executives on Friday at the Utah Capitol, where funding will likely be a topic of discussion.

Construction is expected to begin as early as next year, depending on financing, and would take about two years to complete.