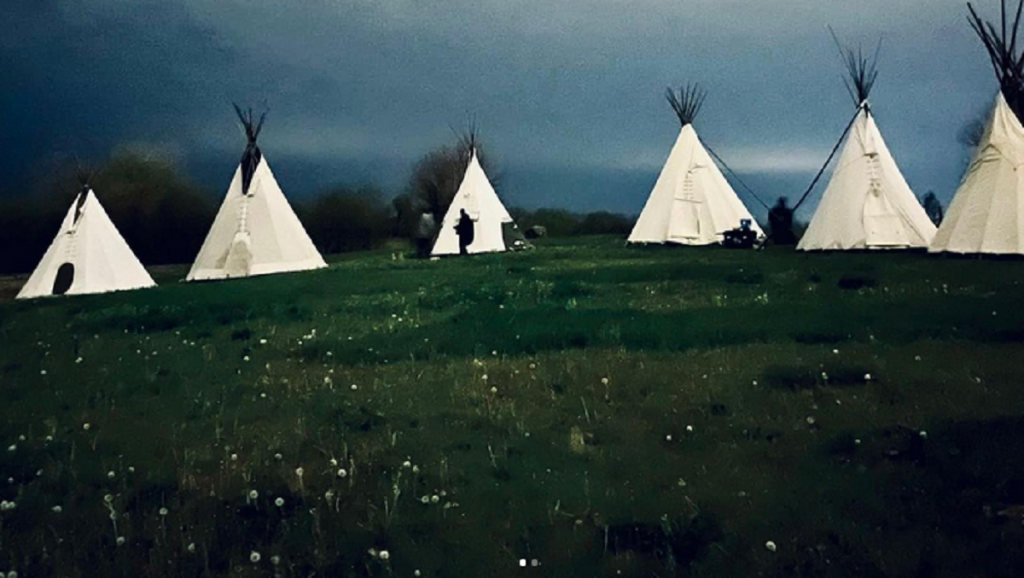 On May 2nd, in so-called Lincoln, Nebraska, the Niskithe Prayer Camp was established in opposition to the “Wilderness Crossing development project, which would significantly encroach on sacred Native American purification/sweat ceremonies and disrupt an existing pristine nature park.”

According to Nebraska Public Media:

Lincoln City Council approved a housing development for 162 single-family homes, 134 townhomes, and 205 apartments near Wilderness Park in Lincoln, across from the only two Native American sweat lodges within the city, last week. Now, a group of Native American community members set up a prayer camp on the approved land in protest.

Seven native teepees surround Native Americans while they burn cedar and pray for the sanctity of the sweat lodges across the street. In the 1970s, Chief Leonard Crow Dog set up those lodges on private land surrounding Wilderness Park for Native Americans to hold traditional ceremonies, pray, and heal. Now, the sanctity of those rituals are in danger of traffic, light, and noise coming from a new housing development.

The protest camp pushed for the Mayor to veto the project, however on May 3rd:

Lincoln’s mayor announced the city will move ahead with plans to build more than 500 homes across the street from the only two Native American sweat lodges in town. She told Niskíthe Prayer Camp leaders Tuesday that the housing development will continue to make room for more residents. The Niskíthe Prayer Camp is a group of Native Americans in Lincoln who have been staying on the approved development land for the past five days.

“This is cultural genocide,” Lincoln’s Indian Center Kevin Abourezk said. “When our community won’t even allow the only two tipis in the city to exist or won’t provide any sort of accommodation for our last two tipis here in our city, that’s cultural genocide. We’re going to stop that, we’re not going to allow that to happen.”

The changes we seek are transformative and systemic. We seek changes that will not revert back after this administration is gone, but will last for the next seven generations and beyond.

While we are disappointed the mayor did not veto the legislation impacting the area of the Fish Farm and the historic sweat lodge there, we have many avenues through which we will continue to seek protections for this site and our ceremonies. We will continue to stand up for our ways of life, for the land and waters, and for the many people whose lives have been transformed or saved by the ceremony, prayers, and power of the sweat lodge.

In a later interview with a local newspaper, “Kevin Abourezk, a leader of the peaceful prayer camp, said the camp with seven shelters will remain for now as the group evaluates its next steps.”