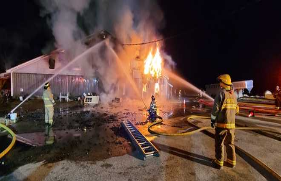 Below are some selected news stories from the last 16 months; no claims by activists for any of these fires have been received as of yet by the North American Animal Liberation Press Office.

April 13, 2022: CONWAY, NH—Firefighters from several departments in Maine helped battle a massive fire that destroyed a butcher shop and meat market in Center Conway, New Hampshire. The fire broke out Monday night at East Conway Beef & Pork and crews spent 16 hours at the scene. Flames engulfed the building and crews were not able to save any of it. Crews used excavators to pull down what little was still standing and to help move the debris to allow firefighters to douse hotspots. Investigators from the New Hampshire Fire Marshal’s Office were trying to figure out how the fire started. Firefighters from the East Conway Volunteer Fire Department said the same facility also burned about 10 years ago. 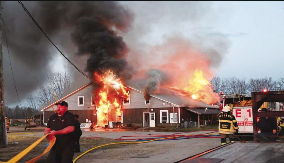 April 12, 2022: CONWAY, NH—A fire destroyed East Conway Beef & Pork on Monday night, killing two cows. The local butcher shop/slaughter house located at 3090 East Conway Road was fully engulfed in flames by about 6 p.m. The building was still smoldering at 10:30 a.m. on Tuesday, with firefighters hosing down the rubble. The cause of the fire was under investigation, he said. According to its Facebook page, East Conway Beef & Pork is a family-owned and operated small business “serving all of your slaughter and smoking needs,” including beef, pork, lamb, goat, bison and chickens.

February 5, 2022: MAUSTON, WI—A massive fire swept through Wisconsin River Meats in Mauston on Thursday, destroying part of the facility. “By the time I got here, the building was engulfed in flames,” co-owner David Mauer said. “We had some livestock that was in the building but we got those animals out. “Do you know how many smoked meats jokes we got,” laughed Mauer. The cause of the fire is still under investigation.

January 7, 2022: HAMILTON, ONTARIO, CANADA—Fire Chief Dave Cunliffe says a cleaning crew working inside a poultry processing plant contacted 911 after they spotted the fire. He said the fire was upgraded to a multiple-alarm and additional resources were brought in to assist. No injuries have been reported. Damage is estimated to be in the millions of dollars.

November 29, 2021: SCOTT TOWNSHIP, PA—Multiple crews are on the scene of a working fire in Scott Township. Officials tell FOX56 the fire broke out just before 6 pm. at the Maid-Rite Steak Company meat processing plant. The structure was fully involved, we’re told all employees that were inside evacuated the facility safely. 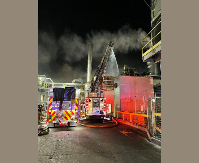 September 13, 2021: GRAND ISLAND, NB—JBS plant in Nebraska to reopen after five-alarm fire. The Grand Island Fire Department Twitter account reported that the roof of the facility was on fire, resulting in a five-alarm response. Officials are still determining the cause of the fire. According to the Steiner Consulting Group’s Daily Livestock Report, the plant has a  capacity of 6,000 cattle per day making it one of the ten largest beef plants in the United States. Cory Schmidt, chief of Grand Island Fire Department told Reuters that the fire burned a hole in the roof in the area that handles rendering. Damage caused by that fire was confined to the rendering space.

August 28, 2021: HANCEVILLE, AL—Crews respond to second fire in a month at Tyson plant near Hanceville. Firefighting crews from a number of agencies responded to the scene Saturday night of a fire at a rendering plant in Cullman County. A large fire broke out at the plant one month ago.

August 24, 2021: ATLANTA, GA—Early Tuesday morning, Patak Meat Products announced on Facebook that a fire broke out at the factory and caused severe damage. The business, which has been specializing in European meats and sausages since 1981, will be temporarily closed. Cobb fire crews were called to the butcher shop on Ewing Road around 10:40 p.m., department spokesman Ramses Rivas said. Upon arrival, crews found heavy flames coming from the center of the building. Rivas confirmed there were no injuries. The fire is still under investigation with no foul play suspected, he said.

July 31, 2021: HANCEVILLE, AL—Firefighters on Friday battled a large fire at Tyson’s River Valley Ingredients plant in Hanceville, Alabama. Crews battled the fire at the poultry meal plant on Cullman County Road 508 amid extreme heat. The cause of the blaze is unknown at this time. There are no reports of injuries.
April 30, 2021: MONMOUTH, IL—The cause of a fire Thursday evening at Monmouth’s Smithfield Foods pork-processing plant remains under investigation. Firefighters responded about 6:30 p.m. Thursday to reports of an exterior wall producing smoke at the North 6th Street plant, and were on scene until around 11 p.m. No one was injured in the fire. The Illinois State Fire Marshal is investigating.

January 12, 2021: Fayetteville, IL—People in the village of Fayetteville, Illinois, are under a boil order after a fire late Monday destroyed a meat plant. The fire destroyed the Deli Star Corporation’s meat plant. It is not considered suspicious, Mounts said. Crews were called to the plant about 10 p.m. Monday and flames were coming from the roof. The plant works around the clock, and the six workers on that shift were able to evacuate safely. No one was hurt in the five-alarm fire.