from Act for Freedom Now! 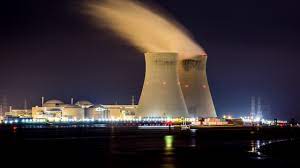 On the night of March 11, the anniversary of the Fukushima nuclear disaster in Japan in 2011, we did a series of graffiti tags along the disused Bar-le-Duc / Ligny / Gondrecourt railroad, which is part of the CIGÉO nuclear burial project. In the ironically named village “Les Castors”, near Ligny-en-Barrois, we sabotaged the track with car jacks to counter the work planned for its reallocation. Our action is a small contribution to the national day of action against the revival of nuclear power and for the immediate end of nuclear power, a day to which our friends from Golfech have called for this March 13.

Nuclear power will not save the climate!

At the end of 2021, 10 years after Fukushima, the Castex/Macron government presented the energy transition program “France 2030”. Beyond the pro-industrial announcement in greenwashing mode about electric mobility or the creation of industrial wind farms, “France 2030” is above all one thing: the announcement of the massive reinforcement of the French nuclear power program. It involves the construction of at least six new EPRs (European Pressurized Reactor), investment in so-called mini reactors – which are currently being developed by the car and arms manufacturer Rolls Royce, among others – and the launch of the construction of CIGÉO by 2030.

At the same time, the European Commission has presented a draft law for the renewal of the “green tax”, following pressure from the French government. This would mean that nuclear power would henceforth be considered green energy. Ratification of this proposal would mean that the climate neutrality investment fund could subsidize nuclear power in the future. One of the conditions for this would be to demonstrate that the storage of nuclear waste is a working option. A quick decision on this issue is unlikely following the announcement of legal challenges by several European states.

We’ll say it clearly: an energy transition that continues to have economic growth and industrial profits as its compass is not even worth the paper it is written on. It is completely irrelevant to us whether the planet is destroyed by CO2 emissions, atomic poisoning or war, the poisoning of drinking water or other miseries that the capitalist system generates.

We oppose the attempt to oppose the climate movement and the anti-nuclear movement. The goals of the environmental movements are inseparable! A compromise with economic power structures to “make the earth just a little less uninhabitable” is not acceptable.

The lie of green nuclear power is as old as the nuclear program and has been countered by scientists a thousand times. Even if the use of uranium as an energy source does not emit much CO2, this is not true for its extraction, which is done in mines and using coal. It is also not true for its transportation by ship using fossil fuels. To consider uranium “green”, one must put aside all the effects of its extraction, the radioactive poisoning of the soil and water, the permanent radiation emitted by reactors and other nuclear plants in so-called normal times and the aftermath of a possible accident. Another blind spot in this calculation is of course the impossible management of the waste from the industry: the storage of radioactive waste for thousands of years!

We feel obliged to say to the inhabitants of the southern Meuse: “No, you are not the lucky ones, chosen to host CIGÉO, the heart of an ecological transition. You are acceptable collateral damage of the ongoing nuclear disaster. Your lives are the acceptable losses of the interests of economic policy. This is not the first time in history that you have been chosen to serve as the nation’s trash can.”

SNCF = collaborator in the nuclear disaster!

The entire chain of uranium production, enrichment, civil and military use and storage requires constant transportation of the atom. Attacks on the state-owned railroad company SNCF are politically relevant because it plays a central role in the functioning of the nuclear program. It is strategically relevant because transportation is the weakest link in the nuclear production chain and offers many opportunities for movement beyond sites that are mostly militarily secured.

While the railroad companies are working to phase out unprofitable routes, it is in the southern part of the Meuse, in the least populated region of the country, that the Bar-le-Duc / Ligny / Gondecourt line will be brought back into service. With the help of local politicians, this is being sold to the population as a kind of reinforcement of the public transport infrastructure. The only real reason for this is the future CIGÉO project. From the logistics platform in Gondrecourt, ANDRA plans to start the connection to the Bure landfill site by 2024. The connection section managed by the SNCF is a central base for the transport of radioactive waste by rail. If the track is ever opened for civilian use, it will be primarily to increase the acceptance of the local population and to bind them even more to the CIGÉO project.

We call for attacking the construction sites of this connection from the beginning and before the work is done! We call for decentralized actions on D-day, the day of the beginning of the physical works on the section, actions that would target the equipment of the SNCF and its branches as well as the companies participating in the works, thus designating them for what they are: actors of the atomic industry.