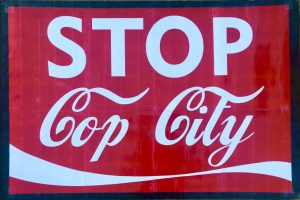 In solidarity with the 4 forest defenders arrested this week in the fight to #stopcopcity, autonomous vandals smashed the windows of Bank of America, one of the largest sponsors of the Atlanta Police Foundation. The building was also redecorated to read “STOP COP CITY”

Those wanting to support the fight can donate at atlsolidarityfund.org and get plugged in at defendtheatlantaforest.com

Free the brave, fuck the boys in blue.

Atlanta will remain a forest.

This month we sabotaged card slots of Wells Fargo and Bank Of America in Center City, Philadelphia. This attack was done in solidarity and complicity with those disrupting the construction of a police training grounds in Atlanta. Cops in Atlanta want to cut down a forest to build a mock city to practice squashing uprisings. In response, individuals are occupying, protesting, and sabotaging. People have started staying in the forest and fucking with the construction. The Atlanta Police Foundation is being funded by Wells Fargo and Bank Of America. We are excited to hear about construction workers being chased out and construction vehicles being messed up.

As proponents of self-directed revolt we decided to target the banks contributing to building the cop city. We hope that by communicating our action others feel encouraged or inspired to attack and disrupt the social order in their own context. While it would be preferable if the police project in Atlanta collapsed, for us destruction is an end in itself. We take pleasure in disrupting capital.

Our sabotage involved collecting plastic cards, which we cut into thirds. The purpose of this was to prevent the cards from easily being removed. Before going out we wiped down the pieces with gloves on and dressed anonymously. We inserted the pieces into atm and door card readers after putting a strip of super glue onto them. One benefit of this action is that it fucks up the machine without making a lot of noise or seeming out of place. We feel this is relevant to point out because the cop city is an example of the police preparing for mass unrest and we feel it is strategic to be able to act discreetly in light of increasing policing and surveillance.