Wuppertal, Germany: I arrived in the stormy weather with pouring rain and I was delighted that nonetheless some people came to 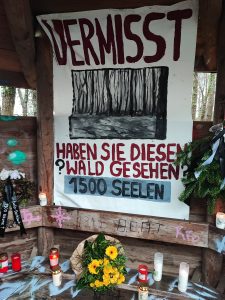 o the forest. In the pavillion I saw a few wreaths and some banner. One banner said: “Missing – Did you see this forest? – 1500 souls.”

The forest walk started with a few speeches. The citizens initiative Osterholz Bleibt (Osterholz Stays) reported about their experiences with the police on the first day of the eviction. The police ordered at the start of the eviction that the vigil of the citizens initiative had to be relocated outside of the forest. The citizens initiative refused. After negotians, the police and the citizens initiative agreed on a new location for the vigil, about 150 meters away from the original location, where the vigil took place on a daily basis since October 2021.When the people arrived at the new location, the police suddenly said that they could not stay at the new location. People had enough of the harrasment by the police and refused to go. The police forced the people to move about 50 meters more and cleared a sit-in.During yesterday’s speech, a spokesperson for the citizens* initiative said that this police action was unlawful, the forestry authorities had stated in a letter to the police that gatherings and journalists had the right to stay in the forest as long as they stayed at least two tree lengths away from the logging zone. The original vigil was more than 2 tree lengths outside of this zone. Several journalists also complained that the police were preventing them from reporting on the eviction.

I wasn’t surprised about the police action during the eviction. I actually had expected that the cops would try to force us out of the forest completely. I had seen one of the managing directors of the limestone works, Oetelshofen, saying on TV that he would not start civil lawsuit against the forest squatters “as long as nothing happens anymore”. A perfidious form of blackmail. An attempt to make hostages of the forest squatters helding responsible for every form of action to preserve the parts of the forest that are left after the uprooting operation by his company. 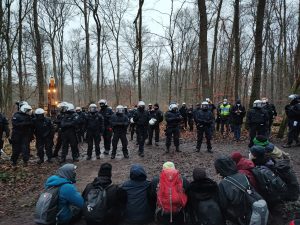 The perfidious methods of the Oetelshofen company became clear when a siuation that seem to have taken place in the forest a few days ago was described during one of the speeches during yesterdays forest walk. A person that was sitting on a bank in the forest was approached by people in a car. He didn’t feel comfortable and decided to walk to the parking lot. His car was suddenly blocked by another car, but there was a small gap that he used to drive away. He was pursued by the car that tried to block him for a long time. When he came home a police car stopped at his home. The police told him that somebody filed charges for impairing the safety of road traffic. That can only have been done by the car driver that was pursuing him. According to the person it was somebody from the Oetelshofen company. Der forest walker also became a “warning to troublemakers” paper from the police. During yesterdays speech people were asked to only go into the forest with at least 2 people. So they would have eyewitnesses in possible future actions by Oetelshofen to intimidate forest walkers.

The forest walk started moving and first passed an already fenced part of the forest. The fenced part of the forest is considered as comapny premises by Oetelshofen and is therefore threatened by uprooting.Till Iseke, one of the managing directors of Oetelshofen, made clear in tv that the promise not to uproot further parts of the Osterholz forest, is worth nothing. First he made an exemption for the company premises, later he even said: “I am somebody who says never say never.” 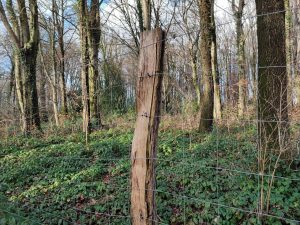 Immediately after the fenced part of the forest we passed the part that was uprooted about 2 weeks ago. Many people again and again went to the fence. They were shocked when they saw the trail of destruction that the action of Oetelshofen left behind. Piled trunks of trees, small leftovers of trunks of trees still standing. A place of death, with many animals which were burried alive in their winter sleeping hideouts.

I felt bad. Two years of struggle to preserve this beatiful forest had come to an end. For a moment I couldn’t see all the things we have achieved. I just saw death and destruction. First little tears immediately followed by rage. In the past two and a half years we fought for this forest, for the many forms of life in it. For the climate, for biodiversity. For the free space Osterholz Barrio. We have set the preservation of forests on the agenda on a local level. In Wuppertal and the surrounding area. The movement is growing and we will continue the struggle and fight for the remaing parts of the Osterholz forest. But we are also aware that other forests around and in Wuppertal are also threatened: The forest that is threatend from the extension of the L419 road. The forest at Kaisershöhe for the German Federal Garden Show and the green area “Kleine Höhe” to name a view. The green washing by several companies and the local Greens with their mayor will face stiff resistance. 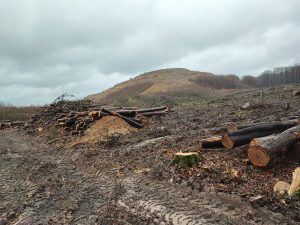 The forest walk continued and ended with a moment of silence at the place from which you can see the entire destruction zone. More tears. A comrade was just starring at the destruction with tears in his eyes. My emotions again went from tears to rage. Pain. Rage. I embraced the comrade who was still starring in the black hole, and we left the death zone. The struggle continues.

Those who wish to support those affected by repression can donate funds to the donation account. Money that should not be used will be used for other solidarity campaigns.