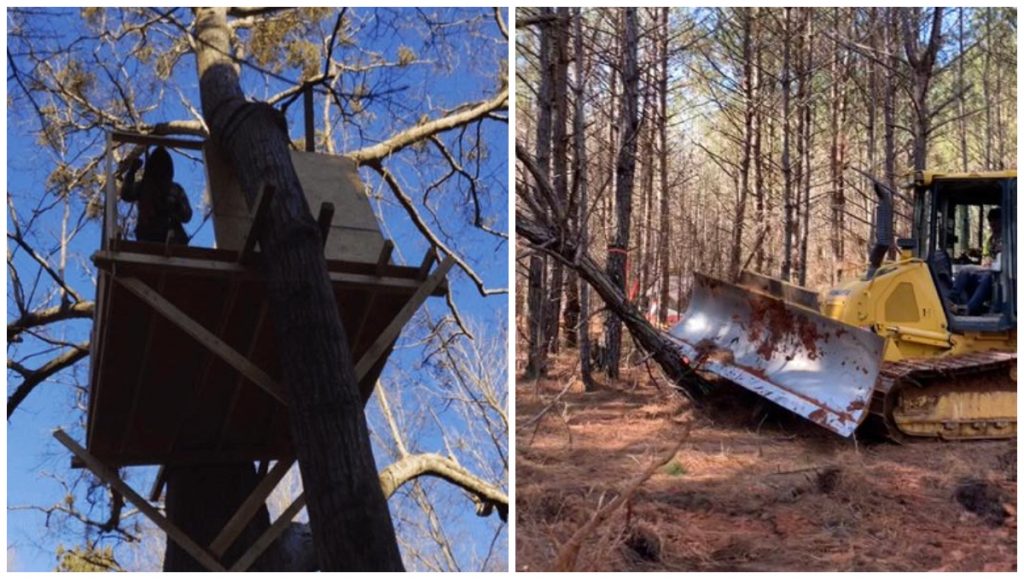 On Tuesday, January 18th, tree-cutting was reported on social media in the Atlanta Forest, an area of highly contested green-space where both a movie studio and the local police are attempting to clear-cut trees to build expanded studio lots and a state of the art police training facility, which will include a “mock city for first responders to train in.”

Over the past year, resistance to the project has taken many forms, from militant marches, community forums and BBQs, protests against those funding and helping to carry out the project, to a campaign to pressure local politicians to block the devastation of the forest. The campaign has brought together a wide variety of movements, groups, and communities, each fighting to save the forest and stop an encroaching arm of the expanding police state, known in Atlanta, as “Cop City.”

According to a report from The Mainline:

Local residents gathered in the forest in response to the apparent bulldozing. [R]oughly 10 people were present in the forest to prevent the bulldozing. Police responded by sending helicopters and drones to surveil the area. Although no arrests were made, one person was detained and held in a police car after an officer pointed a weapon at them in the forest. The person detained was forced to sign a criminal trespass warning document before being released.

Last year, Atlanta City Council authorized a $230 million police budget, accounting for one-third of the entire city budget and a $15 million increase from the previous year. Construction crew company Reeves Young is currently contracted…to build a new police militarization base/training facility. Local organizers have put together a call to action against Reeves Young to terminate their construction in the forest.

The ordinance to authorize a ground lease between APF and the City of Atlanta for the facility was introduced to Atlanta City Council in June 2020. It was ultimately passed on Sept. 8 in a 10-4 despite widespread opposition throughout the city.

Thanks to the rapid response of land defenders, a small group of protesters was able to halt construction and turn back workers; walking them out of the forest. In a report, anonymously submitted to Scenes from the Atlanta Forest:

Today a bulldozer and three employees (One being Alan Williams, the project manager with the APF) attempted to destroy the forest.
A group gathered to stop the destruction under the call of “Not One Blade Of Grass!”
The group approached the construction workers and some led them outside of the forest while the machinery was attacked leaving broken windows and mangled machinery entrails.
The group escaped with zero arrests.

Another post to social media then announced that land defenders had occupied several trees. Known as “tree-sitting,” the tactic has been utilized in direct action and land defense campaigns for decades and has been a staple at various anti-pipeline and eco-defense battles across the so-called US and beyond.

Land defenders are occupying trees in the Atlanta Forest! While people answered the call for rapid response today and kicked bulldozers out of the forest, multiple trees were occupied. Take action to support the occupation and stop cop city!

It went on to state:

In beautiful solidarity, there was a separate anonymous action that took place to make the aforementioned machinery inoperable…The time is NOW for a Diversity of tactics to defend the forest, ancestral Muscogee lands from the clear cutting of the forest for cop city…

Bring your comrades! Bring supplies! Bring skills! Bring your creative cunning!
The forest is calling for your autonomous awesomeness…
Will you answer?