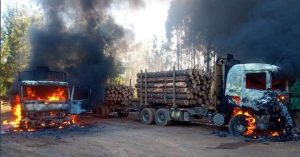 In the Mapuche territory, in the south of Chile, a beautiful coordinated attack conducted in full day made great noise on Thursday, May 6, 2021 in the region of Araucanía. It is nothing less than eight incendiary attacks in less than 6 hours, from noon to 6 pm, against no less than 26 machines of all types (trucks, carriers, skidders) of the forest industry, On the P90 road that leads from Lumaco to Tirúa, in the fields of Los Laureles, the way to Rilún, in Rilún even and at Pishi PiCheen, operated by the company CMPC. The latter, founded in 1920, is one of the forty greatest in the country and is a major player in the paper and forest industry, which destroys and operates the forests of the large-scale zone, and is the subject of a fierce opposition by certain Mapuche groups. 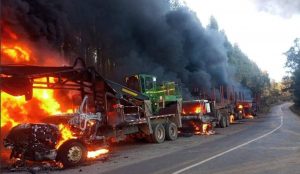 This destructive attack is one of the most important in southern Chile, with that of 2017 when 29 trucks had gone in smoke in Mariquina, in the region of Los Ríos. In the midst of the cries of various state stooges who are now asking for the choice to reinstate the state of siege in the region or to involve the army to protect the forest operators-in particular because a cop who came to stop the attacks took a shot in his bulletproof vest-, this attack was claimed by the RESISTENCIA WEICHAN AUKA MAPU (WAP) group, which left a message on one of the eight sites taken for target: “freedom For Mapuche political prisoners and those of revolt. Down with the forest industry, gravel, latifundists, hydroelectric dams. Down with the Yanaconas [pejorative term that refers to the “traitors”, or the Mapuche working for the forest industry]. Marichiweu.” This last word, a well-known battle cry in Chile, means in Mapuche “ten and a thousand times we will defeat them.”