from: It’s Going Down 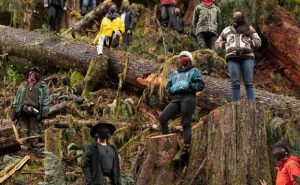 In so-called British Columbia, a campaign to stop the logging of old-growth forests has been building, with a network of active blockades forming a direct line of resistance to logging. According to the Fairy Creek Blockade on Instagram:

Our movement is growing far beyond what anyone originally imagined. We are holding down a half dozen forest protection camps, and this fight is becoming about a lot more than just the forest. The time will soon come when the RCMP will show up in an attempt to break our movement. When they do we need you to be ready to spring into action and join us on the front lines.

After over 285 days of direct resistance to the logging of old-growth forest, on May 17th, “they announced they will be setting up a checkpoint on McClure Road near the Caycuse Blockade, with arrests to follow.”

In a statement sent to It’s Going Down anonymously by anarchists involved in the blockade, forest defenders wrote:

This action happened inside the injunction zone, within a few hours of the pigs beginning their assault on the brave land defenders at Caycuse blockade.

This gate, one of many in the area installed by Teal Jones to restrict access to their operations, is so easily turned against them. It now obstructs them from further destroying the upper reaches of the already ravaged Camper Creek watershed.

Fuck the injunction. Fuck Teal Jones. FUCK the police. The land is too big for you to control.

And hey liberals, let’s get real. Defending the last 1% of old growth forests only, while actively promoting all other industrial logging in so called BC, is like trying to save a few wild animals in a tiny zoo, while promoting the factory farming of millions of others.

In a call for solidarity and support, the Fairy Creek Blockade wrote on Instagram:

[L]and defenders have been preventing the clear cutting of old growth forest on Southern Vancouver Island for over 9 months, and now the Royal Canadian Mounted Police are beginning to arrest protesters to clear the way for Industry to log some of our last old growth forests.

We need everyone to join us on the frontlines! Bring your friends and friends, bring your kids. Join us at Fairy Creek HQ. It’s on Google Maps and just a few hundred meters of pavement, from there you will be redeployed to where you are needed the most! There is room for both arrestable and non-arrestable positions at camp. Come self-sufficient.