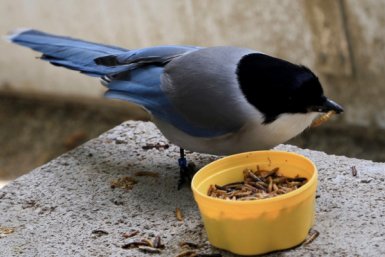 Not only people show sympathy, also birds seem to care about the fate of conspecifics. They notice how much food the others already have and then share theirs with individuals that were not given any. “They seem to take the each other’s perspective into account in their decision and thus seem to show sympathy”, discovered the Utrecht-based biologist Jorg Massen in an experiment with azure-winged magpies. He publishes his findings together with colleagues from the University of Vienna and the Swedish Lund University on September 30 in Scientific Reports.

Helping others was long regarded as typical human behavior. Nowadays it has become clear that it is not only confined to humans. Also primates and some other social mammals show prosocial behavior. “My earlier research has shown that birds too sometimes do something for someone else,” says first author Jorg Massen from Utrecht University. “The question was, however, whether this is ‘instinctive’ behavior that is ingrained, or whether this behavior is flexible, and whether these birds might also take into account how great the need of the other animal is”.

To investigate prosociality in birds, Massen subjected azure-winged magpies to an experiment. He gave one azure-winged magpie an abundance of mealworms – a popular delicacy for these birds –  while the other magpies too had access to that highly desired food or were given nothing at all. The magpie then had the opportunity to share the portion of mealworms with conspecifics through the wire-mesh. 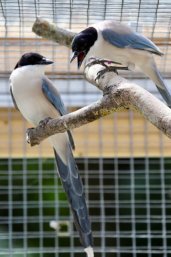 The researchers discovered that the magpies are inclined to share food with their peers. They differentiate, however, between whether others have food or do not have food, and subsequently cater to that lack. “Females mainly shared with the others if they had nothing. The males always shared. We think the latter has to do with ‘advertisement’; look at me being generous. With the females it’s mainly to help the other if they have nothing”.

The azure-winged magpies are more inclined to share food as a response to begging, but it turns out that even without begging these magpies share food with conspecifics that are less fortunate. This shows that azure-winged magpies might truly notice the need of others, even without begging behavior. “They seem to include the perspective of the other in their decision,” says Massen, “they may even show what we call sympathy.”

Massen’s work not only shows that azure-winged magpies can exhibit prosocial behaviour just like people, but also that they may well have the same motivation as people have to do so. “This could indicate that they may be able to empathize with the situation in which their peers find themselves and act accordingly, perhaps with sympathetic motivations. Further tests are however needed to truly investigate whether birds show empathy and sympathy.”

The research also confirms what scientists previously found in other animal species: so-called cooperative breeders –  who raise their young together – have a strong tendency to help each other. “This also applies to humans. Like they say: it takes a villages to raise a child. You see it in hunter-gatherers, but also in our contemporary society: we also take our children to daycare and schools. Because we let our children grow up in groups, we have become prosocial and can work well together. We now also see this in the azure-winged magpies.”

Posted in Wild and Weird and tagged birds.