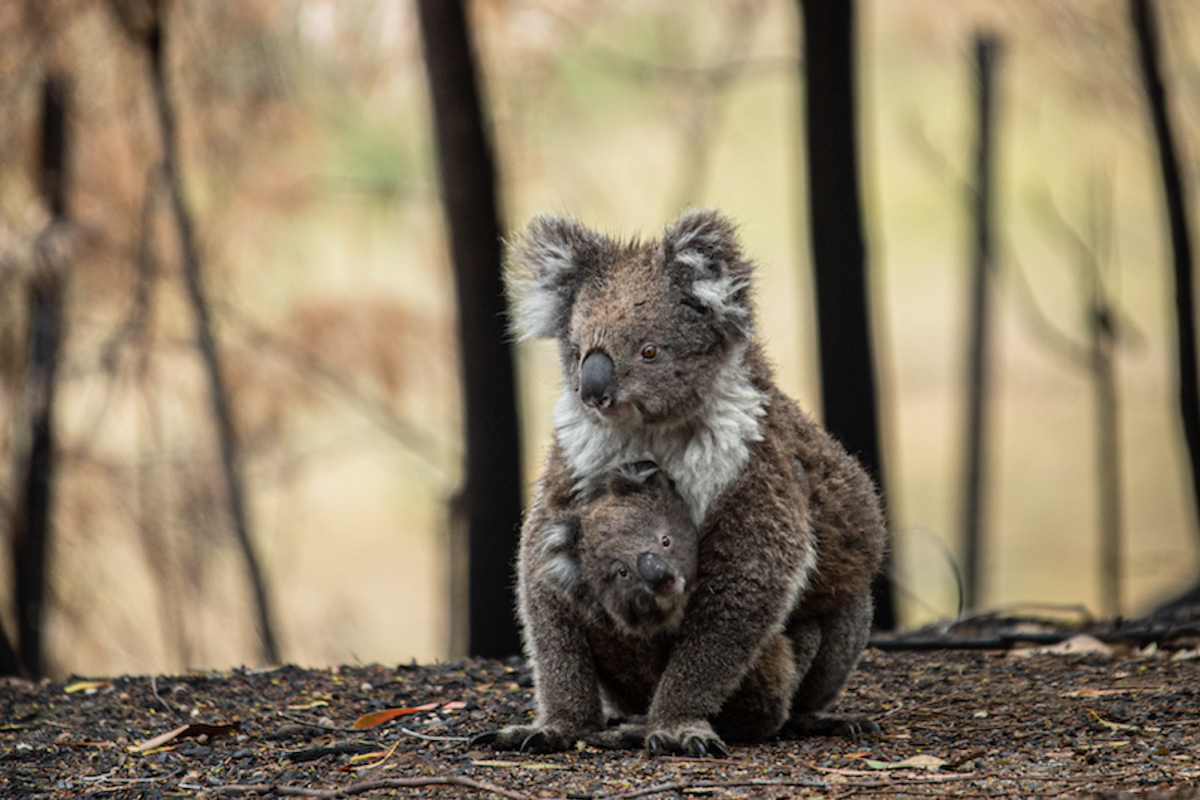 There have been more fires alerts around the world this year than last year, spelling dire consequences for health, biodiversity, and the economy — and human actions are mostly to blame.

“The world witnessed the devastating consequences of the fires last year, from billions of wildlife lost and people losing their homes and livelihoods, not to mention the impact on climate,” said Fran Price, global leader for forests at WWF. “And yet, here we are again.”

Fire alerts in April were 13% higher this year compared to the same period last year, according to a newly released report by WWF and Boston Consulting Group.

In 2019, the world looked on in horror as one-fifth of Australia’s entire temperate broadleaf and mixed forest biome burned, an area nearly the size of England. Last year, Russia had the second-highest level of forest fires recorded, and 2020 is projected to be worse.

This April, nearly 20% of the forested area of northern Thailand burned, causing dangerous levels of air pollution in Chiang Mai. Around the same time, Ukraine saw the start of the worst wildfires in the history of the Chernobyl region, with fires increasing 30% across the country this year.

The report’s analyses are based on NASA Fire Information (VIIRS) and Global Forest Watch (GFW) data, which use satellites to detect “hot spots” on the ground. This information, though useful for comparing fires from year to year, can sometimes be misleading, as it detects thermal anomalies including small fires or controlled agricultural burns.

According to the report, the number of fires in the Brazilian Amazon hit a 13-year high at the beginning of the dry season in June this year, up 28% from last year. Unrelated analyses by the nonprofit Monitoring of the Andean Amazon Project (MAAP), using aerosol emissions instead of hotspot data, have detected nearly 650 major fires in the Amazon since May.

What is causing the fires?

Humans are responsible for an estimated 75% of all wildfires in recent years. In the tropics, fires are often set intentionally to clear land for agriculture. This method, sometimes referred to as slash-and-burn agriculture, is part of a cycle in which forests are felled in the wet season and, as the dry season progresses, are set ablaze to enrich the soil and prepare for planting or for cattle grazing.

The Amazon fires that drew international attention in 2019 were not acts of nature, but generally followed a pattern of deforestation, with the blazes set by farmers and land grabbers as a means to convert cleared forests into pasture and cropland.

Some wildfires are triggered naturally and play an important role in fire-adapted ecosystems, such as in the western U.S., clearing out underbrush and aiding the growth of some fire-adapted plants. But as climate change leads to more intense dry seasons, these areas are becoming more susceptible to megafires. California, for instance, has recently experienced some of the severest wildfire seasons in its history.

Most fires in the Northern Hemisphere are the result of negligence, such as burning of trash, agricultural overspill and accidents; areas at the interface of urban areas and wilderness are at greatest risk.

Wildfires have consequences for human health, biodiversity, and economies, the report says. Though direct human fatalities from fire, estimated at between 100 and 400 per year, are relatively low compared to other natural disasters, evacuations and secondary effects to health from smoke are significant.

Long after the flames subside, public health and well-being are jeopardized. An estimated 340,000 premature deaths from cardiovascular and respiratory issues attributed to wildfire smoke occur each year, 80% of them in Southeast Asia and sub-Saharan Africa. And in 2017, nearly 550,000 people were forced to flee their homes because of wildfires. Rural and Indigenous communities, including those in the Amazon, are at risk as the fire season progresses.

Biodiversity is hard hit by fires, which directly kill and displace animals, as well as disrupt food chains and the balance of ecosystems on which animals and plants rely.

Last year’s wildfires in Australia killed or displaced an estimated 3 billion animals. As 30% of their habitat burned, 26 native species, including the koala, the glossy black cockatoo, the northern long-nosed potoroo, and the critically endangered Kangaroo Island dunnart, were pushed closer to extinction.

Fires in Indonesia similarly affected critically endangered orangutans there, destroying parts of their habitat and food supplies. And, like in humans, smoke can weaken the apes’ immune systems and affect their respiratory health.

The climate change and fire cycle

Fire and climate change feed off each other in a vicious cycle. Hot and dry weather caused by climate change increases the frequency and intensity of fires, and in turn, the carbon dioxide released by fires contributes to global heating.

“We’ve seen the frequency and the severity of fires going up,” Meg Symington, senior director of WWF Amazon, told Mongabay. “So our take is, this is only going to get worse over time as climate change continues its course.”

Climate change influences the size of the area burned and the frequency and severity of fires, according to the report. Extreme fire seasons are becoming more common, and fire seasons are getting longer, particularly in the forests and savannas of East Africa and Brazil. Fire occurrences are also growing more unpredictable, leaving less time for preventive, prescribed burning to be done outside the fire season.

Globally, wildfires emit as much carbon dioxide as the EU does each year, according to Boston Consulting Group’s analyses. And while forest fires account for only 10% of the total burned surface area of the Earth each year (85% occur in savannas), the carbon released as a consequence is disproportionately large: nearly a quarter of all fire-related carbon emissions stem from forest fires (tropical, boreal, and temperate).

More carbon is stored belowground in the soil than in all aboveground vegetation and in the atmosphere combined. Increasingly severe fires penetrate into these belowground carbon stores, releasing carbon that has been locked away for millennia.

The ecosystem of Canada’s boreal forests has changed in just a few years due to increasingly severe fires. Fires have removed a layer of organic matter on the ground, allowing jack pines to dominate the forest, harming overall biodiversity. More than 2 million hectares (5 million acres) of forest in Russia burned in 1998, losing their capacity to store carbon and perform other important functions for up to 100 years.

“While headlines focus on the Brazilian Amazon, equal attention should be paid to countries like Canada, the U.S., Australia, and Russia. For the last 20 years, these have all seen an increase in the average annual area burnt, with repeated fires leaving little to no time for recovery in between,” the report says.

What can be done?

“It is estimated that humans are responsible for around 75% of all wildfires,” the report says. “This means solutions are in our grasp too. There’s no magic bullet that will fix the issue overnight, but there are ways forward if behaviours of the past are changed.”

The report suggests several urgent actions to address fires, including investing in fire prevention, halting deforestation, raising national goals for emission reductions, bringing fire back to fire-dependent landscapes, clarifying governance and coordinating policies, bringing the private sector on board, and relying on science.

“Proactivity and commitment must be at the heart of a global response to fires and must play out at local, sub-national, national, and regional levels,” said WWF’s Price. “Preventing fires before they occur is paramount, and far preferable in all respects to suppressing them when they’re burning. Good intentions on paper mean nothing if they’re not followed up with real and effective actions on the ground — and these actions need to focus urgently on forests and addressing climate change.”

For governments, investing in fire prediction and prevention and focusing on the root causes of burning such as the conversion of forest into farmland is emphasized in the report, as is partnering with communities to reduce risk and manage lands sustainably. Governments are urged to set higher goals for climate change mitigation in their Nationally Determined Contributions (NDCs) under the Paris Agreement.

The Paris Agreement must improve its accounting for emissions from non-deliberate or “non-anthropogenic” fires, the report states. Current policies operate under the assumption that C02 emissions from “natural” fires are reabsorbed by forests as they grow, but this notion has been challenged by scientists as the field of climate attribution develops.

Protecting the standing forest, whether through parks or Indigenous territories, is important, Symington says. Larger blocks of intact forest with more continuity provide resilience in the face of the decreasing precipitation and increasing temperatures that are raising the probability of fire.

In fire-adapted ecosystems such as part of the Mediterranean and the western U.S., fires should not be suppressed but should be managed so they do not blaze out of control. Controlled burns can reduce fuel load and improve the carbon storage of forests. Indigenous people can also play a critical role in sustainable forest management, and this is best done by giving them control over their own land management.

Businesses also have a role to play. One of the more effective measures the private sector can take is to implement no-deforestation and conversion-free commitments, meaning they will not buy from suppliers engaged in deforestation practices.

“Governments and businesses need to put together a coordinated global response in line with the importance and urgency of the fires issue,” said Jesper Nielsen, managing director and senior partner at Boston Consulting Group, “before there is irreversible damage for our planet.”